Focus not on graft

Corruption seems to have become a much maligned word of late. Rightly so. It’s not just fresh from the oven scams like those related to the Commonwealth Games, Indian Premier League (IPL) or 2G spectrum that are getting media attention. Old cases like those pertaining to the Bhopal gas tragedy have found a new lease of life in the media. One minister has lost his job due to the alleged impropriety in IPL dealings, a senior politician is in prison because of alleged irregularities in the business of Commonwealth Games, and the 2G spectrum case has led to a plethora of corporate honchos cooling their heels in jail in company of ex-ministers and powerful politicians.

A cynic would always advise caution till the court verdicts are delivered. However, there are two aspects to most recent reactions to stories on corruption. One is largely an angst about how in our everyday lives as consumers seeking basic services—like licences or property deeds—we have to pay bribes, even if in small amounts. This seems to be an important reason for people of all classes supporting the Lokpal Bill. This concern has also found resonance in a recent policy suggestion by economist Kaushik Basu advocating an amnesty of sorts for bribe payers who confess their guilt. 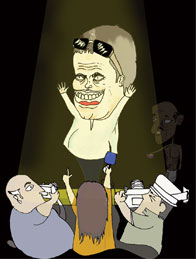 Then there is media circus related to people involved in recent scams. The Rs 70,000 crore impropriety committed during the Commonwealth Games, the astronomical sums unaccounted for in the IPL, the Rs 1,76,000 crore of irregularities in 2G spectrum have become media sensation. But while the media creates a brouhaha over Shashi Tharoor’s IPL dealings, his marriage a year later makes more news. While IPL honcho Lalit Modi is forgotten, the cricketing event replete with film stars, corporates, late night parties and cheer leaders continues to hog the limelight.

Away from all this, is corruption of a much larger scale affecting millions in this country? Such corruption is sometimes sanctioned under policy prescriptions and the ruse of economic pragmatism. The media does not seem interested in such corruption and the so-called active citizenry does not realise its implications. Consider the debate on poverty. Despite a year-long debate around who the poor are and with at least three official versions of classifying people below the poverty line, the Planning Commission submitted a definition to the Supreme Court which states if you spend Rs 20 a day in urban areas and Rs 15 a day in rural areas on certain items, you cannot be termed poor. In a country where 50 per cent children are malnourished, 50 per cent women are anaemic, chronic hunger is widespread, and health costs are the second largest reason behind people going below the poverty line, such an official prescription sounds like a cruel joke.

Another instance of this sophisticated but little commented upon corruption is the way private school lobbies have got together to file a petition in the Supreme Court against the recently passed provision of the Right to Education Act that provides 25 per cent reservation in private schools for poor children. While the Act attempts to define minimum standards of quality (mainly infrastructural), the political impetus behind the provision was at least a small bridge in the divide between the existing hierarchies in our society. The threat of partial obliteration of this class division has prompted these lobbies to raise their voice against the 25 per cent reservation. The middle-class backed media has not raised its voice against such sophisticated corruption. Our opinion makers do not have much interest in such instances of corruption and our policymakers sometimes back such venality. Such stories of corruption are actually determining the country’s fate.