Food and healthcare in war-torn Tigray: preliminary insights on what’s at stake

The war has put 4.5 million people, half of whom are children, in need of emergency food assistance 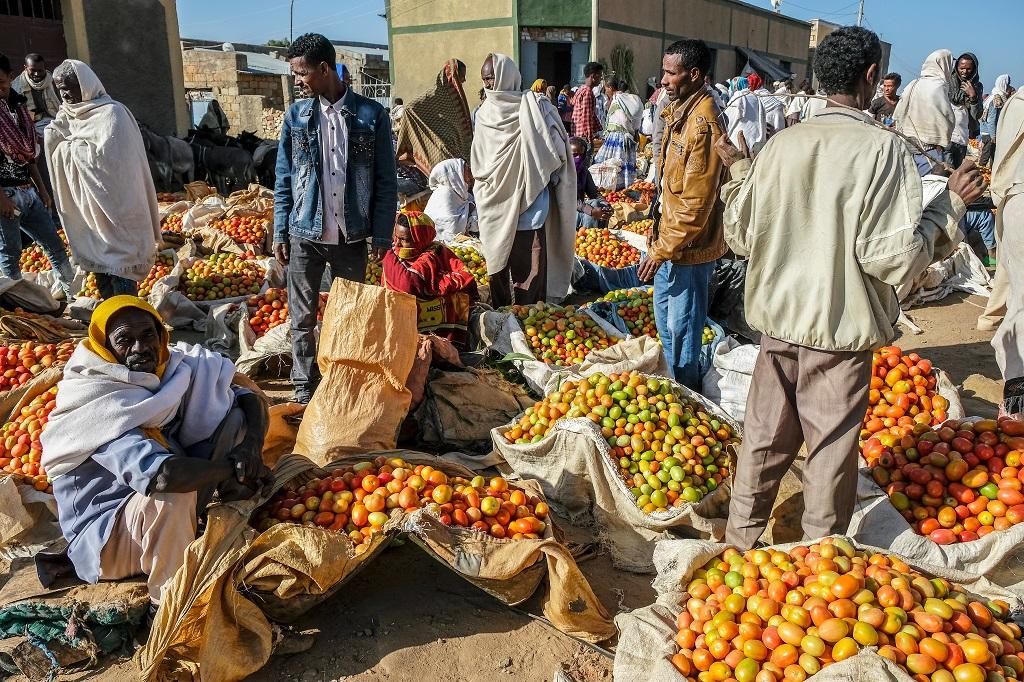 This image was taken at the Hawzien market in Tigray, two years before the war which has put millions in need of emergency food assistance. Oscar Espinosa/Shutterstock

It is now over two months since a war broke out in Tigray between the regional government and the federal government of Ethiopia. The military hostilities have led to a sudden disruption in essential services and endangered the lives and wellbeing of around 6 million residents and over 100,000 Eritrean refugees sheltered in the region.

It’s estimated that 2.2 million people — close to a third of the regional population — have been internally displaced. At least 56,000 citizens, mainly women and children, have already fled across the border to Sudan.

Information on significant loss of lives and property is just beginning to emerge.

It’s difficult to get a complete and accurate picture of the war or its effects on the ground. This is mainly due to a communication blackout and the disintegration of the existing health information system in most parts of the region.

However, as a health system researcher and academic who has been working in Tigray at Mekelle University since 2010, closely collaborated with the regional health bureau and understands the many healthcare challenges in the region before the war, I believe it is possible to provide a broad picture of the consequences of the war.

Besides, as experience elsewhere shows, the health and wellbeing effects will go beyond the direct impact of war-related fatalities, and are likely to last for years after peace is fully restored.

Tigray is one of the 10 regional states in Ethiopia and the fifth most populated in the country. Consistent economic growth has been recorded in the past three decades, creating opportunities for rapid poverty reduction and improvement in health and healthcare delivery.

Before the war, 94 per cent of women who gave birth in the five years preceding the survey received antenatal care. About 73 per cent delivered in health facilities and 63 per cent received post-natal care from a skilled provider in 2019. These contrast with the national averages of 74 per cent, 48 per cent and 33.8 per cent respectively.

At the heart of these success stories was a strong primary healthcare system, of which the community health extension workers were the backbone.

Nevertheless, the region still suffered from high levels of poverty, and key public health challenges remained. These included increasing incidence of non-communicable diseases, low quality of healthcare and acute food insecurity. The poverty rate in Tigray was 27 per cent compared to the national average of 23.5 per cent. The food poverty rate in Tigray was also the highest of all regions, at 32.9 per cent.

The ongoing war is expected to worsen some of these challenges, while rolling back the progress made in other areas over the past decades.

Access to food and healthcare — life essentials and the most basic human rights — are the first casualties of war. Road closures and movement restrictions continue to create barriers to people’s ability to access life essentials.

Food security has been hit hard. Disruption in banking and communication services prevents people from using the resources they have to meet their basic needs. This threatens household food security, and has put 4.5 million people (half of whom are children) in need of emergency food assistance.

The problem is even more concerning given that as many as 9.2 per cent or about 65,000 children under five years of age in the region are already suffering from acute nutritional deficiency such as wasting.

Officials have disclosed that most health facilities have been destroyed or looted during the war. Most ambulances in the region were either lost or destroyed.

A senior health official in the region reported disruptions to medical supply chains, interruption of basic amenities (such as electricity), and the displacement of health system leaders and trained medical personnel, along with low morale among health workers.

Immunisation and availability of vaccines are also critically compromised, putting the lives of children and mothers in great danger. Vaccines already in store are also likely to be wasted due to cold chain breach resulting from electricity interruption.

Similarly, maternal health services such as antenatal, delivery and postnatal care have been interrupted. So have family planning services.

Another direct health effect of the war will be on infectious diseases. For example, a recent UN report indicated that the interruption of the novel coronavirus disease (COVID-19) surveillance and control activities and overcrowded conditions in displacement settings is feared to have facilitated high COVID-19 community transmissions.

The interruptions or limited access to water, sanitation and hygiene services, both within facilities and at the population level, also pose health risks.

War disproportionately affects women and girls as they can be subjected to sexual violence and abuse. There have been reports of women being raped in the capital city of Tigray, Mekelle. Such violence could be worse in rural and other towns of Tigray. Furthermore, the traumatic events of the past two months would undoubtedly result in mental health and psychosocial problems.

Urgent steps must be taken to mitigate the health and healthcare crisis in the region.

The primary focus should be on saving lives and providing care for the needy. This requires inter-related actions such as these:

Emergency COVID-19 surveillance and response operations must be strengthened by providing medical and other prevention supplies at the facility and community levels.

Lastly, mental health and psychosocial support services need to be established, or where they exist strengthened. In particular, serious consideration should be given to women and girls who experienced sexual violence.