Many hues of haldi

Turmeric plays a prominent role not just in our kitchens, but in many auspicious rites and rituals as well 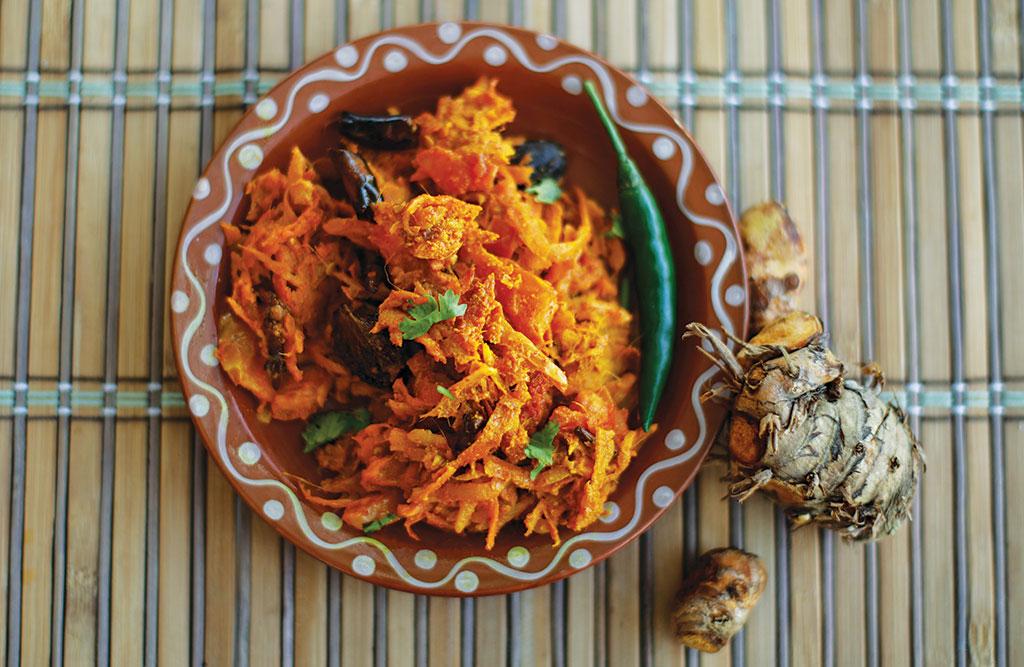 Haldi ki subzi is cooked in Rajasthan in winters and valued for its tonic and restorative properties (Photograph: Vikas Coudhary)

Haldi/haridra aka turmeric is something that no Indian can do without. The rhizome is labelled as spice and used in everyday cooking of lentils, vegetables and meats. It travelled from India to Arab land as well as the eastern and western coasts of Africa circa 7-13 centuries. It is mentioned in the ancient texts of Ayurved as early as third century before the birth of Christ.

Turmeric not only has a prominent place in our kitchens but also plays a significant role in many auspicious rites and rituals. In the Hindi heartland, the phrase commonly used for betrothal of the daughter is haath peele karna. The ritual of kanyadaan — handing over the daughter to the bridegroom — is preceded by applying turmeric paste on the bride’s hands. The bridegroom is also given a turmeric bath on the day of the marriage before he embarks on the journey to the bride’s place. The tint of yellow imparted by this root is believed to ensure good fortune. Traditionally, the invitations sent to close relatives and friends included a few grains of yellow rice. Those who enjoyed informal proximity were taunted, “What are you waiting for — an invitation with peele chaawal?”

There used to be one day in the year — Vasant Panchami — when every thing was coloured yellow by what else but turmeric. Even if the attire was not yellow, white caps, kerchiefs, scarves were sprayed with light golden liquid. One Bhojpuri folk song has an evocative line: Ganga Maiyya The Piyari Charaibho, promising the Mother Goddess River Ganga that a yellow coloured chadari will be offered after the wish is fulfilled.

Only vegetable dyes were used in the past. In Uttarkhand, pichhorha dying is an essential ritual preceding the marriage. Cloth is dyed yellow with haldi and hand-printed with traditional designs — spirals, swastika, floral patterns. The red colour for this purpose is obtained by mixing turmeric with nimbu ka ras and crimson flower petals. Kumkum ka tika is prepared with turmeric as its kesariya colour is associated with valour and spirit of selfless sacrifice. While ochre (gerua) symbolises renunciation, haldi celebrates life.

Many edible delicacies in different regions of India are prepared with the infusion of haldi. It not only imparts a pleasant hue but also a mild sweet taste and an alluring fragrance. Turmeric root is traditionally tied around the pot in which sweet Pongal boils during the harvest festival. This is also seen at the time of Onam in Kerala.

In some regions, turmeric leaves are used as a wrap to envelop the food (mostly fish) that is being steamed or pan-grilled. The leaves have a delicate aroma that enhances the taste of the dish. Innovative home cooks have created haldi ka achaar and haldi ka murabba. From zarda—the sweet meatless pulav in Awadh to semolina-based kesari bhaat in southern India, haldi is indispensable.

A delectable haldi ki subzi is cooked in Rajasthan in winters (recipe below) and valued for its restorative properties. Lots of ghee is used, and chillies and garam masala accent its natural taste.

Qormas do not use haldi, but the gravies of kaliya and salan rely on turmeric for eye appeal. Even the exotic biryani garnished with saffron strands have, in their foundation, a bit of this flavourful ingredient. Shia Muslims eschew both taste and colour during the mourning ritual of Muharram. During this tarqq-e-lazzat, the yellow dastarkhwan is not spread and various dishes lack the touch of turmeric.

In the Anglo-Indian culinary repertoire that evolved during the British Raj, yellow pilaf rice has a special place on the celebratory spread. Not without reason Marco Polo refer to haldi as “poor man’s saffron”.

The rich also prized turmeric for its many therapeutic properties. It is a time-tested ingredient that is mildly antiseptic, germicidal, beneficial for respiratory and digestive disorders. Its many names in Sanskrit indicate this. It contributes towards healing fractured bones and is believed to improve skin texture.

The haste of multinational corporations to patent turmeric is understandable. They were tempted to cash priceless bits of traditional knowledge. For generations, mothers and grandmothers have prepared the haldi wala doodh (turmeric milk) for children to ward off coughs and colds, and to build their immunity. Practitioners of folk medicine prescribed haldi-laced dishes to a person suffering from jaundice. This seems to anticipate the Homeopathic principle of “like cures like”.

Today, many Westoxicated Indians fall head over heels when they encounter turmeric latte or are spellbound by the almost magical properties of powdered turmeric in capsules distributed to Israeli soldiers. Perhaps time has come to go back to our roots (pun intended).

(Pushpesh Pant is a food historian, teacher, columnist and author)