Why I would not advocate vegetarianism

Meat eating is not the key issue, it is the amount that is consumed and the manner in which it is produced. This is where India differs. 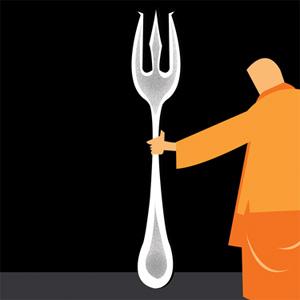 Recently at the release of our book First Food: Culture of Taste, which discusses the link between biodiversity, nutrition and livelihoods, I was asked a question. “Why do you not, as an environmentalist espousing the cause of traditional and local diets that are sustainable, condemn meat eating? After all, meat production is bad for climate—agriculture contributes roughly 15 per cent of all greenhouse gas emissions and half of this comes from meat production. It also has a huge footprint in terms of land and water consumption since an estimated 30 per cent of the world’s land not covered with ice is used to grow food, not for humans but for livestock. A 2014 University of Oxford study on British diets found that meat-rich diets—defined as eating more than 100 g of meat per day per person—emitted about 7.2 kg of CO2 per day as compared to 2.9 kg of CO2 emitted by vegan diets. So, figuring out the sustainable diet should be a no-brainer, I was told.

I differed. As an Indian (I underline Indian) environmentalist I would not advocate vegetarianism for the following reasons. One, India is a secular nation and the culture of eating food differs between communities, regions and religions. This idea of India is non-negotiable for me as it reflects our richness and our reality. Two, meat is an important source of protein for a large number of people, hence critical for their nutritional security.

Thirdly, and this is what distinguishes my Indian position from the global, meat eating is not the key issue, it is the amount that is consumed and the manner in which it is produced. A recent global assessment, for instance, finds that Americans on an average eat 122 kg per year per person and Indians 3-5 kg per year per person. This high meat consumption is bad for health and the environment. In fact, the average American consumption of meat is 1.5 times the average protein requirement.

It should not surprise us that the bulk of the 95 million tonnes of beef produced in the world comes from cattle in Latin America, Europe and North America—all produced with extremely high environmental impacts. Meat production in the developing world is very different, says this assessment by the International Livestock Research Institute, the Commonwealth Scientific and Industrial Research Organisation and the International Institute for Applied System Analysis. Here livestock subsists largely on grasses and crop residue.

But the most important reason I, as an Indian environmentalist, would not support action against meat is that livestock is the most important economic security of farmers in our world. Indian farmers practise agro-silvo-pastoralism, that is, they use the land for crops and trees as well as for livestock. This is their real insurance system, not the banks. Livestock is also not kept by large meat businesses but by big, small, marginal and landless farmers. It works because the animals have a productive purpose: first, they give milk and manure and then, meat and leather. Take that away and you will take away the base of economic security of millions in the country, greatly impoverishing them.

In India, livestock is the most important economic security of farmers. Indian farmers use the land for crops and trees as well as for livestock. This is their real insurance system, not the banks. Livestock is also not kept by large meat businesses but by farmers.

Let’s get the facts straight. In the past, cattle were kept for draught purposes. In the 1980s, the late N S Ramaswamy, the country’s only expert on animal energy, had calculated that the installed capacity of 90 million work animals was equal to the installed capacity of the electric power in the country. All this changed with mechanisation. By 2000, livestock was primarily kept for milk. This is why the males of cows and buffaloes have drastically reduced in each livestock census. Males are now roughly 28 per cent of the total cattle population. Their main purpose is breeding. But cows and buffaloes give milk for seven-eight years of their 15-20 years of life. Farmers use this productive phase for the birth of calves and for milk sale. Maintaining animals is not cheap. My colleagues have calculated that if the animals are fed properly and looked after well it costs about Rs 70,000 per animal per year. This is why farmers need options to take care of the animals not producing milk. Or they will have no options but to leave the animal stray, to eat the plastic cities throw away and die.

This is why I would not support a ban on meat or leather. By doing this we are literally taking away half the potential income the livestock owner possesses. It is stealing from the poor, nothing less. Just imagine if government entered our homes and took away half our assets or made them valueless. What would we say? Banning meat is cruel demonetisation.

But I also understand that religious sentiments are strong. These demand that cattle (not buffalo) should not be killed. In this case, the answer is to buy back each cow from the farmer, build large gaushalas that can take care of them and find ways of dealing with the remains so that even after death, no product is sold or used. The answer is not militant vegetarianism. The answer is definitely not vandalism and violence.