For all that is green

Standing today at the threshhold of a doom 04t can happen actually in a split second in the form of a nuclear holocaust or a germ warfare, the efforts at salvaging the environment should ideally be people-oriented 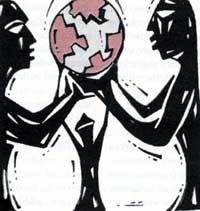 AT A function organised by the World Wide Fund for Nature- India in New Delhi on June 5 on the occasion of World Environment Day, the chief election commissioner, T N Seshan said that the burning topic of environment could be compared to the proverbial elephant which was touched by four blind persons and wrongly defined by all!

There is no need to go into the details of the proceedings of the function where several suggestions were made, debates held and explanations given, except imbibe the information that there are only five people to every vehicle in Delhi as opposed to 45 in Calcutta, 24 in Mumbai and 55 in Madras; and that vehicular pollution alone contributes to 64 per cent of the Delhi's noise and air pollution; that the quality of the Yarnuna water in Delhi is in the E category - fit only for irrigation and industrial uses, and that by AD 2010, the foodgrain requirement in the country will touch 240 million tonnes. Depressing enough.

What rules our lives anyway? Environmentalists and their outfits have emerged as the 20th century Nostradamus, predicting a great apocalypse if the right things don't just happen. Dante's descent into Hell perhaps couldn't have been worse. The emergence of environmentalism in the last decade has, in certain ways proved a boon and in some cases, a sustained eyewash. From forming a committee for mountain development to wildlife conservation to protest incinerator usage to CFC phase-6ut efforts, the world has marched a long way in defining green crusadeering today.

Even as the Habitat ii in Istanbul took off after a yawning span of two decades (Habitat I was held in Vancouver), to parley the state of the world's teeming multitude, everyone woke up to several cruel facts about the state of the global populace. Since many of the situations are being realised as irreversible, there seems to be a frenetic attempt to pitchfork reforms everywhere, from anywhere. But the centre is falling apart.

The book Our Stolen Future, by Theo Colborn, Dianne Dumanoski and John P Myers - described as a cautionary tale - makes interesting observations: "What is happening to the animals in Florida, English rivers, the Baltic, the high Arctic, the Great Lakes, and Lake Baikal in Siberia has immediate relevance to humans. The damage seen in lab animals and in wildlife has ominously foreshadowed symptoms that appear to be increasing in the human populaton." The book says: "In time, the alarming reproductive problems first seen in wildlife touched humans, too." In fact, the root of the problem had been grasped by the early 20th century American philosopher, John Muir, quoted in the book as saying, "When we try to pick up anything by itself, we find that it is bound by a thousand invisible cords ... to everything in the universe." No one seems to have yet picked up the common thread. Precious little is usually done to resolve any ecological disaster until the 91tuation gets out of control.

At this moment, we are bestowed with a punctured ozone layer; a massive onslaught of deathdealing old and forgotten viruses; the AIDS / HIV spectre; a toxic waste inundation resulting in,@carcinogenic food, water, dyes and materials; a struggle for the right over one's indigenous resources; nuclear' disasters still lurk around; virulence of pollution; a marauded forest cover, dying waterbodies and depleting resources, and a madly burgeoning population.

Intellectuals may have been and swearing by the swooning over environment on umpteen occasions like the World Environment Day or the Habitat conference. Sustainable @evelopment anyway is their mantra. Alternatives naught. But a national newspaper reported that despite all homilies or exhortations, 17,000 bio16gical species or sub-species disappeared from the face of Earth, about 26 billion tonnes of top soil was washed away by surface erosion, desertification rose by nearly six million ha, 17 million ha of forest cover was lost - and all this in just one year.

Environmental activism today should mean environmental legislation strictly coupled with people's participation the world over, in tune with the scale of degradation experienced in different places. It is heartening to note that for the first time in the judicial history of India, the first green bench has started sitting from June 3 at the Calcutta High Court as per the Supreme Court's direction. One expects a lot from it.

A Poison Information Centre recently set up at the All India Institute of Medical Sciences in New Delhi would, besides immediately treating cases of poisoning, provide information on poisoning induced by chemicals, plants, drugs and household pesticides. Shimla has reportedly been successful in completely banning polythene bags and introducing paper and cloth bags for commercial purposes. In this kind of effort, educating the people is a basic necessity.

In this regard, Anil Agarwal, director of the Centre for Science and Environment, New Delhi, opines that Third World issues, being complex ones, need careful handling. According to him, the Third World must have development in a way that protects the environment and its people from harm. And there is still enough time left for us to deliver the goods.