We need not burn forests to get good fodder for cattle. Our lands are rich with green grass without the fires

We need not burn forests to get good fodder for cattle. Our lands are rich with green grass without the fires

Forests and wildlife are the precious living jewels of our country. Our past as well as our future as a nation, and even as a species on the planet, is inextricably linked to our forests. Our forests are the source of almost everything we need to survive—fresh water, clean air, food and medicines. They help rejuvenate our soils, ensure timely rains and cool temperatures while sequestering carbon which moderates climate change.

As go our forests, so goes the nation. As our forest cover has declined, so too has the health of the nation.

Deforestation is rampant throughout the country with assaults on our forest cover being continuous and relentless. Illegal timber felling and encroachments, mining and pollution, building of dams and highways and de-notification of what little forest area is left in the name of development have reduced India’s dense forest cover to barely two per cent.

What remains of the forests dries out. Another major danger to our forests is forest fires. It leaves a black spot on our once green country. Forest fires have been raging across India at an ever-increasing and destructive rate even in areas that were once too wet for forest fires, such as the Western Ghats in the Indian peninsula. When we first came to the Western Ghats decades ago, the area was always far too wet for any major forest fire. Small grass fires, yes; but large damaging forest fires that killed old trees and countless animals, no. 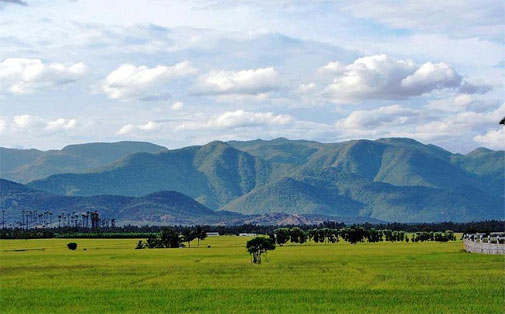 But today, due to continuing encroachments, de-notifications and degradation of the area, mindless cutting of old growth trees and forest areas, climate patterns are shifting, rains are not falling as they have and should, forests are drying, and fires are the unnatural result in areas where virtually no forest fires occurred in recent and even distant past.

It is important to note that the entire Western Ghats region, and even most of India, falls in the tropical rainforest belt that encircles the globe—from latitude 30° south to 30°north. Hence, forest fires are not a natural occurrence in most of India but a consequence of the destructive powers of humanity.

As forests burn in national parks and protected areas like Bandipur and Nagarhole, animals that can flee do so to save themselves and to search for water and food. This is one of the reasons for the massive increase in species and wildlife in our own sanctuary, including the great landscape animals like elephants, over the last several years. As these animals flee the flames, they are forced into areas of human habitation, setting up more and more encounters with humans and heightening the human-animal conflicts.

In the recent years it has been argued that forest fires are not all bad; that they are a natural part of the evolution and regeneration of a forest area, and that a “no-fire policy” practiced in India and other parts of the world has actually damaged forest areas. This is, indeed, true to a certain extent in some areas of the world like the vast savanna areas of Africa, the great grassy plains of the American Midwest, and the pine forests of the Rocky Mountains of the Western US—a place that was once my home. But the argument does not hold true for a tropical rainforest belt, which the Western Ghats is supposed to be a part of and has been a part of for many, many years of “wet” history.

To test if this were true or false, we used our own lands as a living laboratory. In doing so, we were able to demonstrate to local people that they did not need to burn forests to get good fodder for their cattle—our lands were rich with green grass without the fires.

A part of the problem across the Himalayas has been the introduction of Chir pine in the mountains for timber and sap. It is actually horrible for timber because it warps easily and is very vulnerable to pests. As climate change takes hold and mountains heat up, Chir has made its march up from lower elevations to the upper forest areas which used to be free of it and was filled with Deodar, Ton and other native species. Chir needles are deadly to walk on in upper slopes—slippery and horrible during monsoons. They also facilitate rain runoff, setting up flash flood conditions. So it is understandable why burning the Chir needles up made sense. But the real reason to set up fires was to facilitate flow of sap in these trees for tapping to be used for turpentine.

Today forest fires are raging globally, and certainly not in a natural fashion. Climate change is raising temperatures everywhere, drying out forests everywhere thereby setting up conditions for forest fires everywhere. All of this is the result of humanity’s continuing mindless burning of fossil fuels and cutting of forests. It is causing climate change across the planet, leaving the flora and fauna little time to adjust.

It is easy to see within our own sanctuary to understand forest ecosystems and the part fires have or have not played in various areas. There are ancient primary forest trees that are several hundred years old along with woody creepers that are 200 to 300 years old. Clearly, they would not be here if fires had been a natural part of the forest ecosystem in the last several centuries.

We are on dangerous ground when we accept very questionable justifications and excuses for the various disasters hitting our forest areas when, in fact, these disasters are happening as a result of man’s interference. We must understand that every tree we cut means less moisture in the atmosphere which translates into less rainfall not only in the area where the forests are cut but even thousands of kilometers away. We can scarcely have our Western Ghats become savanna land if we want our monsoons to arrive on schedule and have our rivers that are the lifeline of the south to flow.

And while “new birth” can certainly come from fires, it is clearly no justification for purposely setting them in what are meant to be, or have been in the past rainforests.

We are mindlessly waging this devastating “war” on what little forest areas are left around the globe, including right here in India. Trying to take solace in justifications like “forest fires are not all bad” is not the answer. The answer lies in taking responsibility for our actions whether they be in allowing our remaining forests to be cut down, degraded or destroyed, starting these forest fires ourselves, introducing new species that are helping to spread them, or continuing to burn fossil fuels with no recognition/sense of responsibility at all of what we are doing to the planet's biosphere and climate conditions.

Instead we need to map out plans to help reverse our monstrously huge “footprint” smashing down on the Earth across the board starting with protection and preservation of what little forest cover we have left here in India and around the globe.