Bullets are not the answer to development 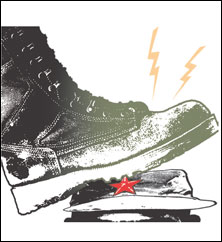 The massacre of 76 policemen in Dantewada by naxalites is reprehensible. Yet we cannot brush aside the underlying poverty, deprivation and sheer lack of justice that are breeding tension and anger in vast areas of rural, tribal India.

We cannot say that these developmental issues are long term—as the Congress spokesperson has reportedly said—while the immediate task is to annihilate the Naxalites. Because, unless we can fix what is broken here, let us be very clear, there is no real solution at hand.

We know naxalites profit from the anger against the collective loot of the resources these lands possess. These are the lands we get minerals from; the electricity that lights our homes is enabled here. But the people who live there have no electricity. They should own the minerals, or forests; they should profit from development. But they get no benefit from the resources that are simply extracted. By policy and design, their lands are taken away, their forest cut, water polluted, their livelihoods destroyed. Development makes them poorer than they were.

But we want to hear none of this. A few years ago, in Raipur, Chhattisgarh, while releasing our detailed report on mining and environment, I saw how intolerant we have become. The state’s governor was to release the report. But even before we arrived, there was a media buzz our critique of mining policies and practices meant we were partners with naxalites. At the release function, the room was “filled” with mining-at-all-cost supporters. They shouted down any voice that spoke of the problems, and poverty, mining had caused in the region. The governor was visibly in a bind. He could not deny our data and analysis. But he was also desperate to brand us as insurgents who raise uncomfortable issues.

The next day, the machinery whirred into action. It openly challenged us. It presented no data on how it had shared revenues of mining with people. It did not explain how it had controlled the enormous and deadly pollution from the sponge iron factories that encircled the region. It did not also explain why it was allowing open manipulation and misuse of laws to dispossess people from their lands, against their will. It only incited violence against us, saying since we had questioned mining policies and were seeking new answers, we were against development. The next step: we were against the state, so we were with naxalites. With us or against us. This is a Bush slogan, but also a war syndrome, which cannot buy us peace at any cost.

We have to rethink the development India has practised so far. Let’s just think forests. These are the very lands where India’s tree wealth exists. Some 60 per cent of the country’s dense and most bio-diverse and economically rich forests are in these tribal districts. Think minerals now. The bulk of what we need for growth—iron ore for steel, bauxite for aluminium and coal for power stations—is located here. These are also the same districts—poor and backward—our beloved tigers roam in. Here’s where the country’s major watersheds are located.

How can we build a growth model which uses the wealth of the region for local development first? Such a development model would mean listening to people who live on these lands, about what they need and want for their growth. It means seceding to what people want: the right to decide if they want a mine in their backyard, or the forests cut. It means taking democracy very seriously.

If this is accepted, protests will have to be seen in a new light. There are no misguided people, or naxalites, holding up Vedanta in Orissa, or Tata in Chhattisgarh. These many, and there are many, mutinies will have to be carefully heard. This country cannot brush aside people’s concerns, in the name of a ‘considered’ decision taken, in Delhi or somewhere else. Government must stop believing it knows what is best.

Once we accept local veto over development decisions, the tough part begins. For, this means seriously engaging with people to find ways that benefit all. It means sharing revenue from minerals with villagers, not the poisoned peanuts they get now. It means changing priorities: valuing, for instance, a standing forest as protector of water, wildlife, even a low-carbon future. It means paying directly to local communities so that they decide to protect forests, because it benefits them.

Ultimately, listening to dissenters means reinventing development. Accept we cannot mine all the coal, bauxite, iron ore—whatever—that lies below forests people live in, and depend on. It will make us get careful about how to use less minerals for more growth? Can India do more with less? There’s a lesson India’s poor teach: walk lightly on the earth you have. Let us not riddle them with bullets.