Chhattisgarh government reinstates the role of the forest department to coordinate claims that are to be filed by communities, according to the basic structure and procedures laid out in law

The Chhattisgarh government has amended its earlier order that made the forest department the nodal agency for community resource rights in the state. Photo: Kumar Sambhav Shrivastava / CSE

“There is no doubt that this order is against the law and betrays the FRA 2006 in its letter and spirit. The state government of Chhattisgarh is bound to take this illegal order back. The rollback of this order would be a classic example of how over-dependence and confidence on bureaucracy can taint the image of the government.”

What this author wrote on June 01 can be seen to find credence in the amended order published by the Chhattisgarh government on the late evening of June 1, 2020. 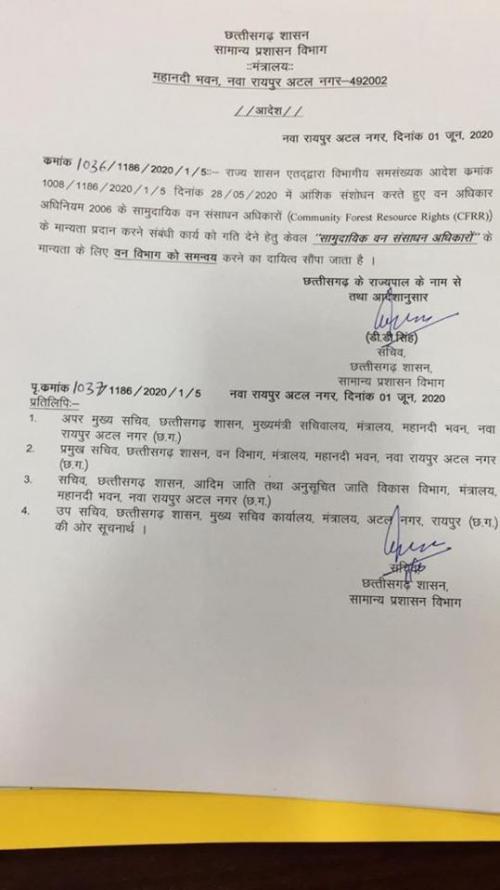 This amended order has withdrawn the previous clause of notifying the forest department as the ‘nodal agency’ for the implementation of the Scheduled Tribes and Other Traditional Forest Dwellers (Recognition of Forest Rights) Act, 2006.

This order has reinstated the role of the forest department to coordinate claims that are to be filed by communities, according to the basic structure and procedures laid out in law.

Alok Shukla, convenor of Chhattisgarh Bachao Andolan, has welcomed this move of amending the previous order. He said: “The state government, through this order, has not only respected the spirit of the Forest Rights Act, but also clearly explained the roles and responsibilities of the forest department.”

Shukla welcomed the state government’s move to recognise the role of social movements that had immediately raised objections and pointed out illegalities, and called these developments as the ‘right step’ in correcting its previous order.

However, this new notification does not make it clear as to why the forest department has been given the responsibility of coordination only for recognising Community Forest Resource Rights (CFRR) claims. Will the forest department not exercise its mandate of coordinating the processes for the variety of rights that are recognised under other sections of the Forest Rights Act?

This exercise should also be seen as a correctional measure and believed to be coming from a well-intentioned state government.

It is significant to note that in the post-independence period, the forest department has played a crucial role in the dispossession of forest dwelling communities and kept the process of their rights recognition at bay. Advocate Anil Garg responds affirmatively to these developments.

“The forest department of Chhattisgarh has long-pending cases under investigation in 39 sub-divisions — of areas under section 5-19 of the Indian Forest Act, 1927. There has been no concrete action yet in this regard,” he said.

“The initiatives of the state government in implementing the FRA will be realised if the forest department is directed to record in their PF Area Register — all documents pertaining to Nistari rights, Bazibul Arz, Protected Forest Survey Completion Report and Protected Forest Block History for 4,000 forest blocks,” he added.

If the forest department is given strict instructions to correct these mistakes and the state government makes sure that these long-pending processes are completed, it will be fulfilling an essential condition for recognising community rights under section 3(1)(2) of the Forest Rights Act and lead to the building of a positive movement across the state.

It is also interesting to note that the in Chhattisgarh (and Madhya Pradesh), the sub-divisional officer (Revenue) has been given three roles in the implementation of FRA.

The same officer is entrusted with special rights as a ‘settlement officer’ under the Chhattisgarh Land Revenue Code, 1959 and is given powers to settle and take action as ‘forest-settlement officer’ for investigation under section 5-19 of Indian Forest Act, 1927. Again, they also act as Chairman of the Sub-Divisional Level Committee formed under the Forest Right Act, 2006.

This administrative structure should be viewed through the prism of land reforms that were launched in 1950, soon after independence.

The Forest Rights Act, 2006, is also seen across the country as an important legislation in the journey of land reforms. Hence, the state government should try to ensure that the special rights of the sub-divisional officer (Revenue) do not encroach the process of coordination, as announced in the orders passed on June 1.

The state government of Madhya Pradesh had issued an important order on April 16, 2015, regarding the effective implementation of FRA. It explicitly  demarcated the roles of both (revenue and forest) departments. 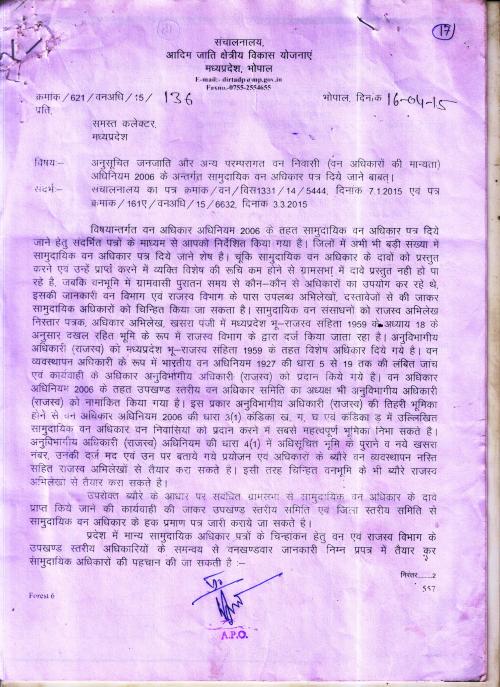 The state government of Chhattisgarh should take cognizance of this order.