Conservation as tool for assertion: How Banni pastoralists took matters in own hands

Banni grassland covers around 27 per cent of the total area of the Kachchh region of Gujarat and has a thriving population of pastoralists locally known as Banni Maldharis.

The Maharao of Kachchh, formerly called Cutch, offered Banni to its inhabitants, the Maldharis, for grazing, evidence from the pre-independence era showed. In 1955, Banni was designated a ‘protected area’ by the forest department of Gujarat, under the purview of the Indian Forest Act of 1927.

The department, to check the ingression of salinity from Rann to the grassland, introduced Prosopis juliflora in the 1960s. The invasion of this alien shrub species drastically affected the arid ecosystem and became a threat to the native grass species and local ecosystems.

In December 2006, the central government passed the Scheduled Tribes and Other Traditional Forest Dwellers (Recognition of Forest Rights Act). In 2008, the Government of Gujarat also started the implementation of the forest rights act(FRA) in the tribal belts of the state.

The implementation of the Act in the non-scheduled districts was initiated after 2012 after a circular was released from the state’s tribal development. For the pastoralist community of Gujarat, this notification came as a ray of hope.

In Gujarat, there was no legal recognition for their occupation of pastoralism or their role in conservation, traditional customary rights and knowledge. They were categorised as merely “farmers who produced milk”!

The pastoralists of Banni, who got oriented to the provisions of FRA by interventions of developmental agencies, found in 2014 for the first time that the provisions would be an end-to-end solution to the issues they were facing for sustaining their livelihood.

First was access to grazing and second was conservation of their forest resources from the exotic Prosopis juliflora (locally called ganda bawar) that had encroached on their grazing lands. Back then, the motivation was the ‘New Working Plan’ by the forest department which had never considered the pastoralists.

Soon, the pastoralists unified and ensured all the procedures as laid under the provisions of FRA were followed by 16 Gram Panchayats across 47 hamlets of Banni. The claim was passed through a Maha Gram Sabha of Maldharis and was submitted to the Subdivision Level Committee by 2015.

The typology of the rights that they had put forth was in tandem with the provisions of the legislation. Under Section 3(1) (b) they had claimed the Nistar Rights as by the erstwhile Maharao of Cutch. Then, under sections 3 (1)(d), 3 (1)(i) and 5, they had claimed access to grazing as well as the right to protect, conserve and manage their resources that they have been traditionally using.

Apart from this, they had also claimed the right to convert their forest villages into revenue villages, under Section 3(1) (h). Although the pastoralists had an unerring direction of the legislation, yet no titles were granted!

The increasing impact on the grasslands and the constant pressure required immediate action, despite the title being granted. The pastoralists, as per Section 5 of the FRA, took the agenda of conserving their community forest resources into their own hands after hoping for state or district action for four years.

Around 25 Gram Sabhas, which had submitted their files, got together and constituted Community Forest Resource Management Committees (CFRMC) in their respective hamlets and arranged for the funds from local stakeholders. The CFRMCs developed a plan for the restoration of grassland land and presented it in the Gram Sabhas.

Several parameters were taken into consideration: Banni being rich in biodiversity, considered the hub for 262 species of migratory birds and several mammalian species developed a habitat-sharing model.

There were instances where the invasive prosopis had created habitats for other species to dwell such spaces were kept intact. Lands that can be used for grazing by the pastoralists and traditional grass species that can be restored were identified and restored.

The Maldharis of Banni followed an Aabhatt system (called ‘participatory’ in development jargon) among themselves to initiate the process of saving their grassland.

In three years, the CFRMCs worked together and restored more than 3,000 hectares and developed about 26,052 cubic metres of water scapes (virdas). The scientific studies conducted by RAMBLE, a research station located in Banni, showed that the post-restoration of the grazing areas has helped in substantial improvement of the habitats.

The areas across the CFMCs, in which the invasive Prosopis trees were removed and were made open, showed humongous ecosystem revival. The soil, too, showed an immense amount of regeneration.

After the restoration, most of the native grass species like Echinochloa colona (Saau), Ochthochloa compressa, Dactyloctenium aegyptium and Dichanthium annulatum, which were once used by the pastoralists either for their consumption or sustenance of their livestock, increased in the grazing area.

Around 84 per cent of the 108 herbs and grass species were found palatable compared to the pre-restoration period, when the share was negligible. 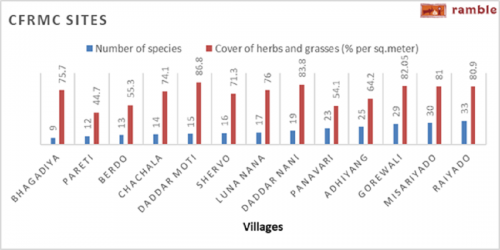 Banni’s case of using traditional knowledge as well as techniques to conserve and manage forest resources of the pastoralists may be considered a commendable story. But the intrinsic relationship of several such pastoral communities with nature and its sustainable utilisation remains unearthed because of biases and failures in policy implementation.

Pastoral communities across India await formal recognition of their occupation and their contribution to animal husbandry as well as dairy. Its applicability for the pastoral communities, who are designated as Other Traditional Forest Dwellers despite implementation of FRA, is long due.

With inputs from Ritesh Pokar