Odisha diaries: the struggle for community control over land, forests and natural resources

No matter how much compensation is promised, companies will need ‘a social licence’ to conduct business on the land of the people

No matter how much compensation is promised, companies will need ‘a social licence’ to conduct business on the land of the people 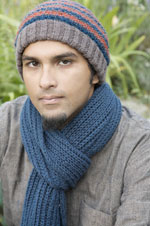 For the past 20 years, local communities across the eastern Indian state of Odisha have engaged in numerous movements to protect their customary lands and forests against industrial and government interests. Several have captured global attention, documenting resistance from some of India’s most marginalised communities in the face of dispossession and displacement.
Now, Odisha’s communities are mobilising once more to assert their rights over the resources that define their culture and survival, using modern technology and India’s Forest Rights Act of 2006 (FRA).

Last month, in the village of Gunduribadi in Nayagarh district, I met with community members who have come together to legally document and claim their customary forest and grazing lands, fisheries, water bodies, medicinal plants, traditional knowledge, and sites of their livelihoods. Equipped with a government-issued map from 1983, GPS machines, and bottles of water, we set out under the blazing sun. We quickly crossed the administrative boundary of the village, and over the next six hours, scaled the steep slopes of the hills surrounding us.

Along the way were landmarks erected by the British demarcating the land as a state-owned reserve forest. Today, the villagers are reclaiming this land as their own. The GPS-generated map will be the final seal on their recent application for a title recognising their land and forest rights under the FRA.

The FRA was born from growing disenfranchisement fermenting in the heart of India’s forests and a subsequent complex negotiation with the government. The Act begins by acknowledging the historical injustice adivasis and traditional forest dwellers have faced due to the non-recognition of their rights over their ancestral lands. This injustice has roots in the colonial rule, when land policies were intended to commercialise and exploit India’s forests by declaring tribal and traditional forest-dwelling communities’ homelands as state property and dispossessing millions in the process. These policies were largely continued by the post-colonial state.

“Most of the forests in the country are customary community lands. They belong to the people. First, the British took them away, and then after independence, the government identified them as State forests without following due legal process. (Through the FRA) the State is not being benevolent in ‘giving’ people new rights, but belatedly recognising their pre-existing rights,” says Madhu Sarin, a member of the Campaign for Survival and Dignity, a national coalition that led the mobilisation for the enactment of the FRA.

Addressing the injustices of the past is not the only exigency facing forest-dependent communities. Across Odisha, and indeed across India, local communities are facing pressures from rapid industrial development and resource extraction. One example is the village of Dhinkia in Jagatsinghpur district, where communities have been engaged in a vibrant movement against the multinational steel manufacturing company POSCO over the past decade.

The people of Dhinkia earn a substantial livelihood from betel leaf cultivation. Any resident in Dhinkia will tell you that life there revolves around paano, dhaano, aurmino (betel leaf, rice, and fish). Behind every home you will find a shady patch dedicated to the growth of Paan leaves. Besides these palm-frond-covered nurseries are expansive rice fields and cashew trees that supplement household incomes. The residents’ connection to land is as strong as the resistance that has defined the area over the past 10 years. 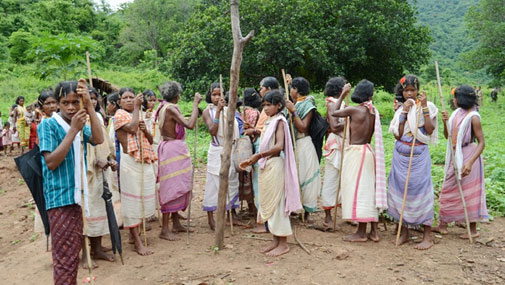 In 2005, the state government of Odisha signed an agreement with POSCO promising 1,619 hectares of land to build a plant to process iron ore that the company would mine. The project was pronounced as the largest foreign direct investment ever made in India. As details of the agreement were slowly revealed, it became clear that no formal consultations were held with the communities who would be affected by the project. The company had also failed to conduct any environmental or social impact assessments. The people of Dhinkia launched a movement to resist the takeover. After a decade of violent escalation and protests, they are still resolute.

“Our dream is for our children and grandchildren to live here on this soil. We don’t want any compensation. We want to stay here,” says a woman leader as she recalls the day she was shot at with rubber bullets. Another woman leader, who faces over 30 charges due to her involvement with the movement, reiterates, “I will give up my life before I give up my land.”

A critical tool to assert rights

Back in Gunduribadi, as we began climbing the hills, Sudha Ranjan—a volunteer with Maa Maninag Jungle Sureksha Parishad, a local federation of forest protection villages supporting the mapping process—explained to me, “Land is being leased to companies for industry and mining. Companies stand to make a lot of money and politicians will benefit. But for the communities, there is only loss. Across Odisha, you see places where there is resistance. Tomorrow, something could happen here, too. Now with the FRA, the communities can have rights over their forests, non-timber forest products, and medicinal plants.”

In March 2008, the Palli Sabha (village assembly) of Dhinkia invoked the FRA and claimed hundreds of hectares of forestland that had been earmarked for construction of the POSCO plant. But over the next several years, the government repeatedly issued project clearances and delayed implementing the law. In 2010, village assemblies again rejected the diversion of forest land for the company under the FRA. Yet, to date, as in much of Odisha, no formal community forest land titles have been granted.

While the FRA remains one tool for communities to assert their rights to protect, document, and manage their customary lands and resources, due to a lack of awareness and the reluctance of local administrations to grant titles, it must be accompanied by a larger effort to respect community rights.

As Sudhir Pattnaik, journalist and editor of independent newspaper and media outlet Samadrusti, says, “The FRA has given an instrument in people’s hands to claim their land, given they are sufficiently organised. Mobilisation is the only answer. People will need to organise and resist. When the government violates its own laws and the media remains silent, there is a need for organised protest. There is no alternative to that.”

No substitute for an ecological economy

The huge risk of social conflict that opaque business practices create is undeniable. A 2014 study conducted by the Rights and Resources Initiative and the Society for Promotion of Wasteland Development found that at least a quarter of India's districts are embroiled in some form of conflict over land and resource takeover. The POSCO case illuminates that when communities anticipate threats to their lands and livelihoods from external companies, there will be significant repercussions for all concerned parties.

In Dhinkia, while things have calmed in recent years, it seems unlikely that POSCO will ever acquire the promised land. No matter what assurances of compensation are provided, a majority of Dhinkia’s people are defiant in their opposition to any type of industrial use of their land. As Pattnaik says, “Money is not a substitute for an ecological economy.”

The struggle for community control over land, forests and natural resources in Odisha points to the need for a new approach towards investment and development. With the recent election of Narendra Modi’s government, there have been attempts to dilute the FRA and other legislative safeguards protecting community rights in order to fast-track investment. Already the new government has introduced an ordinance aimed at weakening the 2013 land acquisition Act by removing consent and social impact assessment requirements for a significant number of projects.

However, from Jagatsinghpur to Khandadhar to Niyamgiri, community resistance shows that no matter what agreement is signed and how much compensation is promised, companies will need “a social licence” to conduct business. This means obtaining free, prior, and informed consent from the communities that reside on the land. Coupled with responsible investment policy and practice, the recognition of the customary rights of millions of forest-dwellers under the FRA can contribute to the largest land reform in India’s history—as well as towards inclusive democracy and development.

Gaurav Madan is senior associate of the Asia Program at Rights and Resources Initiative, an international coalition of organisations working for forest and land policy reform