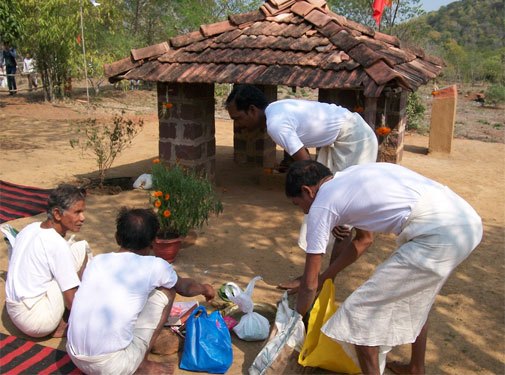 Sacred groves have been live manifestations of historical, cultural and emotional attachment of human beings with forests. They unify rural communities religiously, culturally and socially. In due course, degradation and depletion of forests and forest resources have occurred due to several reasons—both natural and anthropogenic.

Attempts are being made to revitalise and restore the philosophy of sacred groves. One such effort was the sacred grove festival organised at the Indira Gandhi Rashtriya Manav Sangrahalaya (IGRMS) in Bhopal on February 7 and 8. Community groups from Maharashtra, Manipur, Rajasthan, Chhattisgarh and West Bengal actively participated in the festival.

Participants performed rituals unique to their community at the sacred grove demonstration sites developed by IGRMS at its sprawling campus. There were replicas of sacred groves of different states such as Maharashtra, Manipur, Rajasthan, Chhattisgarh, Kerala, Tamil Nadu and West Bengal. The major objective of these exhibitions was to display the culture, religion and belief systems of various communities.

“We worship Indra, the rain god, during the scorching summer. It brings timely rains and a lot of happiness,” says Sumanti Bhagat of Shailla village of Jaspur district in Chhattisgarh. “Annaprabhu, the food god, is worshipped in December and Mahadev in April. Each village has at least one saran (sacred grove),” says Shiv Kumar Ram of Bada Galanda village of Chhattisgarh. The village deity is believed to reside in the sarna. Village residents say these rituals remain unchanged over the years. “It is a heritage site in our village, gifted to us by our ancestors. There is no change in any ritual related to sarna,” says Bhagchand, resident of Shailla village. 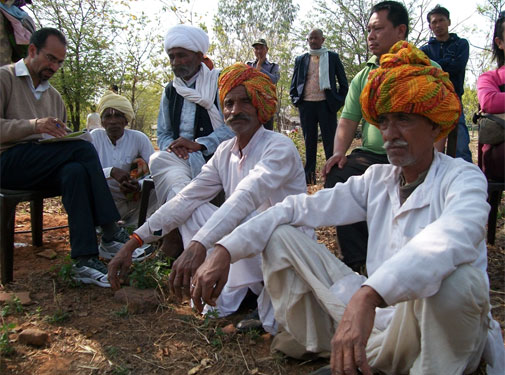 Sacred groves are called “orans” in Rajasthan. The state’s Bishnoi community is well-known for their strong beliefs in saving animals and plants. “We have several sacred groves but rampant mining for stones has created a lot of problems. On some occasions, we are rendered helpless while trying to save our ancestral orans,” says Nanak Ram Gujar of Haripura village in Alwar district. “We had the practice of offering a goat to the deity after a devotee’s desire had been fulfilled. The goat was sacrificed as part of the ritual. But now this practice has changed. The goat is set free after performing the ritual,” recollects Nanak Ram. “Such goats are buried in the oran in a complete ceremony once they die naturally,” he adds.

According to the unwritten Constitution of the community, no one can destroy or cut trees in these sacred groves. Collection of dried wood is also not allowed. “Sacred groves not only unify communities but also create a forum for festivals, dialogues and other social events,” says Aman Singh of Krishi Avam Paristhitiki Vikas Sansthan, a non-profit based in Alwar district of Rajasthan. There are over 50,000 sacred groves in India, mostly in the Western Ghats and central and northeast India.

While Acts and policies have several advantages, they have created conflicts between people and management authorities. There are reports on the degradation of sacred groves. Reasons for this include a change in people's attitude towards them. The newer generations don’t believe in the methods their ancestors followed to maintain the fragile ecosystem and biodiversity. Development works, deforestation and encroachment are other possible causes of degradation of sacred groves.

“Celebration of this sacred grove festival at IGRMS is an attempt to create a platform for dialogues among communities from different corners of the country involved in fighting for the same cause,” says Kailash Malhotra, professor and anthropologist who has written several papers and books on sacred groves. “A travelling exhibition has been initiated for protection of sacred groves across the country. It helps in disseminating the significance of sacred groves at a time when the world is looking for suitable models for biodiversity conservation,” says Malhotra.

Chandra Prakash Kala is a faculty member at the Ecosystem and Environment Management Division of the Indian Institute of Forest Management, Bhopal