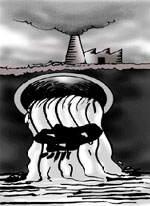 fresh water is, perhaps, the most important of all natural resources affected by uncontrolled economic growth. In large parts of India, people face scarcity of water for both drinking and irrigation purposes. Take the case of Tamil Nadu. There are 34 river basins in Tamil Nadu. The Institute of Water Studies (iws) in Taramani has prepared comprehensive environmental status of all of them in collaboration with various government departments, the Tamil Nadu Pollution Control Board and other institutions and universities in the state. It was found that among the 34 river basins, the ones facing maximum pollution are the Madras basin, Palar basin, Cauveri basin, Bhavani sub-basin and the Noyyal sub-basin. Other basins - like the Vaigai and Tamaraparani - are comparatively better off.

The Palar basin: The total area of this basin is 1.847 million hectares (mha). Quality of ground water in shallow aquifer is monitored periodically by the directorate of ground water. A major portion of the basin contains saline water caused by the discharge of untreated effluents from tanneries, rubber and plastic industries. Out of the total number of 680 tanneries in Tamil Nadu, nearly 400 are located in the Vellore district situated along the basin. Effluents from these tanneries pollute the entire stretch of the Palar basin across 100 km, effecting around 25,000 ha of cultivated land.

The Madras basin: It contains four sub-basins, namely Araniar, Kusastha-laiyar, Cooum and Adayar. The main environmental problems include over exploitation of ground water for drinking purposes, discharge of untreated domestic sewage into the Cooum and Adayar, and pollution by industrial effluents. Similarly, ground water in Minjur and Panchetty is affected by seawater intrusion due to over extraction of fresh water from the wells to meet the requirements of Madras city.

The Cauveri basin: The Cauveri river is severely polluted from Bhavani to Trichy. Industries manufacturing chemicals, sugar, paper and several tanneries are situated along the Cauveri and its tributaries. Further, sewage water is allowed to enter the river without any prior treatment. Worse still, for construction purposes local people remove sand indiscriminately from the riverbeds, especially from Karur to Trichy, which depletes the ground water. So far, no action plan has been prepared to address the problems.

The Bhavani sub-basin: Pollution in this basin is especially serious from Nellithurai to Bhavani town. The stretch is occupied by industries involved in dyeing besides manufacturing of paper, viscose and sugar. It is reported that the ground water in the basin before and after Mettupalayam town has been contaminated to the extent that the water cannot even be used for agricultural purposes let alone for drinking.

The Noyyal sub-basin: Water in the entire basin is highly contaminated, especially the stretch from Coimbatore to Kodumudi. This is again due to discharge of sewage water from Coimbatore and Tiruppur towns and effluents from the dyeing and textile industries at Tiruppur. The groundwater samples taken along the river course from Coimbatore to Tiruppur have indicated that the water is contaminated with highly toxic industrial wastes and is not suited for coconut cultivation. Although the government constructed the Orathupalayam dam across the Noyyal river at a cost of about Rs 35 crore some eight or nine years back, the entire work is a waste as the reservoir stores the polluted water. Further, the stored water, due to seepage in the nearby wells, further contaminates the groundwater. Farmers living on either side of Noyyal are forced to irrigate their land with the contaminated groundwater and hence are not getting the desired yield of coconuts. Though effluent treatment plants are being constructed in Tiruppur, it is doubtful as to whether these units will be at all effective in cleaning the water to the standards set by the central pollution control board.

Throughout India, modern development policies and practices, including modern agricultural technology, have resulted in some adverse impacts on the environment. At present, long term planning is necessary to reduce or eliminate these impacts and promote sustainable development.