From Coke to Kokum

Recently a trend towards synthetic kokum has set in. This version is half as expensive as the natural one, has similar colour and fragrance. So consumers do not know the difference between the two

Recently a trend towards synthetic kokum has set in. This version is half as expensive as the natural one, has similar colour and fragrance. So consumers do not know the difference between the two 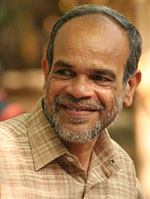 Though most people in the world know Coke they are unaware of a similar-coloured soft drink called ‘Kokum’. What is the specialty of this drink?

Kokum, Garcinia indica, is a fruit tree found in Western Ghats of South India; both Maharastra and Goa are well known for kokum trees. The red cherry-like fruits, from the pulp of which the drink is prepared, are harvested during April and May. Though Kokum is similar in appearance to Coke it is hardly advertised – though well-known in the villages and towns of the Western Ghats – it has a very different taste and has a ‘cooling’ effect.  Another characteristic of Kokum, due to the presence of hydroxi citric acid in the juice, is that it’s an obesity deterrent. According to Ayurveda Kokum juice has qualities that control ‘pitta’.

However, despite these beneficial qualities, faces tough competition from Coke and other commercial soft drinks. In recent years, another trend has set in: the manufacture of synthetic Kokum juice, with similar colour and fragrance to the natural one. Rama Gouda, a person from Karoor village in Sirsi Taluka, (who helps village women process Kokum fruit and make the juice) said, “Our product is natural. The fruit are harvested from forests in the wild and is organic. Even in processing the fruit no chemicals are used”. This naturally processed juice can be stored for two years without any refrigeration. The problem caused by synthetic Kokum in the market has affected the women who produce natural Kokum juice; synthetic Kokum is half as expensive as the natural one! 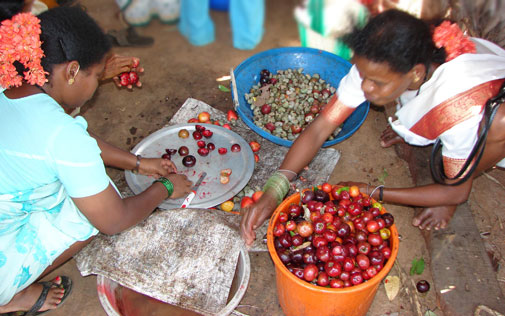 As there is no regulatory body to control the fake Kokum, and with the consumers unaware of the difference between the two Kokums’, there is also a health hazard happening.

In addition to the drink, Kokum rind is a souring agent used in curries and a sol kadi, a local dish. The fat extracted from the seed has high medicinal value.

In recent years the demand for Kokum rind has led to unsustainable harvest of the fruit. The rind is used in an anti-obesity drug in the USA and Japan; the demand has resulted in high prices for the rind. Instead of waiting for the fruit to ripen the forest dwellers now collect the raw fruits, lop branches of the tree and cause damage to the forest. Nor are there ripe fruit for the wildlife, or any left for regeneration.

Realising the threat to the Kokum trees, Prakruti, a civil society organisation based in Sirsi, Uttara Kannada, is trying to create awareness among people about conserving these trees.

Prakruti also helps forest communities to raise Kokum saplings and plant them around the village for the coming generation. Kokum has much potential to challenge Coke. It would require financial and institutional backing to popularise Kokum as an ethnic health drink. Vinay, a young entrepreneur is launching ‘Kokum Cola’ in the market.  It is hoped that this product catches on and improves the health of the people as well the that of the Kokum trees.