From forestry to productive forestry 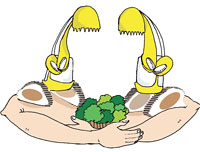 My position on the need to re-position forests in development (see ‘Rethink growth with forest capital’, Down To Earth, May 16-31) has brought me a huge response.

On the one hand are those who argue that functions of forests already include conservation vital to life; they need to be valued and protected. The unsaid (and often stressed) corollary is that any discussion on the need to improve productivity of forests through the involvement of people needs to be shunned. The stretched and simplistic positioning of this view is that forests and people cannot go together. One writer has even argued passionately that the government should think of taking over—buying out—large areas of forests from people and then protecting them for future generations. On the other hand, are those who argue for further engagement of people with forests.

The discussion on this matter is deeply polarised. The two sides are at war, and in this war both forests and wildlife are the losers. But all is not lost. My point that standing forests need to be valued and that people need to engage in the business of productive forestry, has also brought some hesitant voices of support. We need innovative experiments in policy. Let me stress again: the stalemate in the forest policy is not tenable.

Each passing day, the constituency for the protection of forests is shrinking. This is when the forestlands in India are under a big threat—not necessarily from the people living in forests but from developers who want the land, minerals, water and other resources. Over time, the infrastructure imperative will take away forests, which have become the only “free” and “available” resource in the time of scarcity. The demand to open up forests will grow.

Forestland is being lost bit by bit and all the talk about compensatory afforestation is just that—talk, not trees on the ground. This way we will be left with pockmarked wildlife reserves that animals and people will compete for. It is to avoid this future that we need forests to be central to development as we reinvent it. It is in this context that we must discuss the potential of forests, both the intangible benefits of ecological security and tangible economic returns. This discussion is taboo in the forest-conservation circles, where the country has moved from extraction to protection, without clarity about how the land will be utilised for production.

But let us also be clear that India (or for that matter any country) cannot afford to set aside 22 per cent of its land, and not use it for development. This is a message that environmentalists fighting against forest destruction are rightly reluctant to give. But it is time we changed this.

Take a look at the economic survey of the country to see how forests have disappeared from national accounts. There are estimates of what forests generate for the economy but no valuation of the standing forests and their role in water and soil protection, and certainly no valuation of the minor forest produce, which provides livelihood to the poor. There is no assessment of the role of forests as providers of grazing land, which in turn provides for animal care and dairying. Instead, you will see that the contribution of this sector—defined as agriculture, forestry and fishing—has sharply declined each year. Its annual growth rate in 2005-06 was 5.2 per cent. By 2009-10 its growth rate turned negative. Its place has been taken by the mining and quarrying sector, which registered a growth rate of 8.7 per cent in 2009-10 against 1.3 per cent in 2005-06. In fact, forests have been blacked out in the economic assessment of the country.

The forest survey report, which tells us that the forest cover in the country is stable and increasing, has another valuable hidden fact: the stock of forests has decreased between 2005 and 2009. Clearly, something is amiss, if we consider the enormous potential of growing wood and non-timber products and their impact on livelihoods and economies of states. We import more and more of forest produce, from pulp to timber. It is for this reason that revenues from forests are declining in state budgets, which creates pressure for their diversion to more productive uses.

The way ahead involves three steps. One, we need to urgently value the economic potential of forests and to incorporate this into national accounts. But this valuation must go beyond carbon storage and other obvious benefits. It must take into account the million ways in which forests provide livelihood support to people. Two, as I have discussed earlier, we need steps to pay for standing forests. This money must go to communities bearing the burden of conservation. The economic value of keeping forests as forests for watersheds and biodiversity has to be paid to the custodians. It will build local economies and local support for forest protection.

Three, most importantly, we have to increase the productivity of the remaining forestland. But we know that the business of cutting and planting trees that survive cannot be successful without people who live in the forest. The question is whether we are willing to see the writing on the wall. As yet, I have no certainty about the answer.