The 'selfish gene' is the one which loses in the long run and in this game, the meek survives 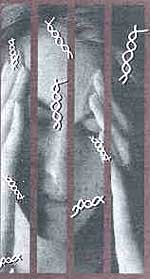 The Darwinian phrase, 'survival of the fittest', gives the impression that the over-riding force in evolution must be selfishness. In a fundamental biological sense we mat say that feel- ings of cooperation and trust are not genetic but social in character.

The problem is brought out in a most telling way in what is referred to as the prisoners dilemma. Consider two prisoners, Tan and Door, who are suspected accomplices in a crime. If Tan throws the entire blame on Door who keeps quiet, then Door will get a heavy punishment while Tan would be freed. In case both of them defect they will be held responsible but will receive less stiff punishment. The other possibility is that Tan takes the entire blame. This makes Tan the sucker and thus makes him suffer more. The last possibility is that both of them "cooperate" by totally refus- ing to speak. The authorities then mete out a smaller punishment for a lesser offence.

What would be the best course of action for Tan and Door, anyway? Each realises that the best strategy is to defect because he can go sc.ot-free. This,would lead to a heavy sentence being awarded. to each of them. 'On the other hand, if they could communicate they may cooperate and receive a lesser sen- tence. What does one do under these circumstances? This is the pri~oner's dilemma.
Political scientist Robert Axelrod and biologist William Hamilton of the University of Michigan, USA, showed in their landmark paper of 1981 that in the simple game of prisoners dilemma betrayal or trust can be elicited. But what if Tan or Door keep meeting often ? Then we have what mi~t be called the 'iterated' prisoners dilemma.

Axelrod decided t9 run a competition and played this game on a computer to find out what will happen after 200 kials. He worked out 15 possibilities. The reward of mutual cooperation was three points for each of the two players, the reward for temptation was five, while the sucker's payoff was zero points and if both players defect, each got one point. We can see that as the game is played, the maximum possible points are five per move (defect), while the minimum possible is zero (sucker). The ideal would be three points (cooperation).

Axelrod found out that the best strategy was the one suggested by his coUeague Al}atol Rapoport. Rapoport's strategy was called 'tit for tat'. The strategy here is to cooperate in the first instan~e and watch what your opponent does and r~peat it in your subsequent moves.

Axelord analysed that out of the 1S strategies eight can be called "nice" -one that is never the first to defect. You defect only in retaliation and it is these nice strategies that score highest, with the best being 'tit for tat', which came up to 84 percent of the benchmark value of three points per move. The other seven ranged between 83-79 per cent of the bench- mark, while even the most successful of the "nasty" strategies scored only 67 per cent. So, while in the one-shot prisoner's dilemma the nice guy finished last, in the repeated prisoner's dilemma, you can be a nice guy and still finish well.

Then there is the alternate scenario where there are individuals who act "unnatural" and cooperate. These "mutant Mahatmas"tendlo win out and propagate their genes more effectively than the &:elfish fellows. The defector plays for a short time, while the community goes on for millenia. Thus over time, one envisages individuals with genes that dictate cooperativebehaviour to accumulate and form the solid citizenry of a community. These are the genetic origins of sociology.

The results of such analysis of the prisoner's dilemma can also be applied to human behaviour and to economic and social policies. Indeed, such a thing was done way back in 1944, by John von Neumann. John Nash of Princeton University extended this to include many players or partici- pants and came up with optimal solutions called the "Nash equilibrium".

In 1967, John Harsanyiof the University of California at BerkeJey analysed the game theory aspects of the us banking system, while Rei~hard Selten refined the N ash equilibria through what is known as "subgame perfection". Based on the Nash-Harsanyi-Selten approach, we now understand pricing policies, international trades and economic competition between companies and nations.