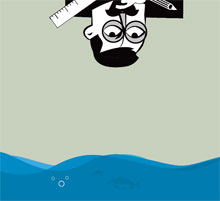 Engineers require re-training, not the Ganga. This is where I had left our conversation last fortnight. Why did I say this? The inter-ministerial committee I participated in as a member was discussing how much the ecological flow—the water that should be left in the river for ecosystem and livelihood purposes—should be at all times. How much water is needed for the river to be a river; and not a drain?

The committee’s deliberations had reached a flashpoint. My colleagues at Centre for Science and Environment had analysed hydrological data to recommend an ecological flow regime that allowed 50 per cent of the total flow of the river for six months of lean season. In addition, we proposed that during the high discharge season hydropower development could take as much as 70 per cent of the total water. We showed that this 30:50 ecological flow regime would allow hydropower to make most of the river flow and, therefore, would not have much impact on the total energy generated and tariff. Run-of-the-river projects, which used flowing water as the raw material for energy, generated as much as 80 per cent of their energy in six months.

But this proposal was unthinkable for hydropower engineers. They had “designed” their projects on either zero e-flow or at the most 10 per cent. In this way, they would generate power with every drop of water in the low-discharge season. IIT-Roorkee, which is a key consultant to the government and to private hydropower developers, was asked to review the analysis. It provided a confidential note to the chairperson, disputing our analysis with calculations to show that tariff would increase by 30-60 per cent in the 30:50 scenario.

This view of engineers was adopted as gospel. The draft final report circulated to all members provided for 20-25 per cent flow for nine months and only up to 30 per cent for the rest of the three months. We asked for raw data on which IIT-Roorkee had based its analysis. We asked for this because our calculations were based on hydrological data provided by the same institution. The data was unavailable. But when we went through the IIT-Roorkee papers with a fine-tooth comb we found hydrological data of two projects—330 MW Srinagar project on the Alaknanda and 520 MW Tapovan Vishnugad on the Dhauliganga, both tributaries of the Ganga—which had been used for analysis.

We compared this data with what had been provided earlier to find one modification: the quantum of flow in the river had drastically and inexplicably reduced. Since there was no water in the river, in all seasons, energy generation reduced and, therefore, any provision for higher e-flow would inevitably lead to huge increases in tariff. Delicious maths! We then took up the matter with the chairperson. Our question was: what was the source of this raw data and how had it mysteriously changed? This questioning brought some changes. The subsequent report included a provision for 50 per cent e-flow, but only in situations where there is “drastic” reduction in water.

Therefore, the final report of the committee has accepted the need for 50 per cent flow but with conditions, which leave it vague and weak in application. We have differed and given an alternative view. Our analysis shows that winter (lean) flow is less than 10 per cent of the high monsoon flow in almost all 24 projects for which hydrological data is available. In other words, if less than 50 per cent water is left in the river, it will be reduced to a trickle in these months.

The report is now with the government for it to take a final view. Our position is clear: it is possible for hydropower development to be feasible, even if there is a mandatory provision for 50 per cent e-flow for six months of lean season. It is not too much to give for a flowing, living river.

But I believe this issue raises bigger concerns that need to be discussed. Firstly, the question of how the potential of hydropower generation is arrived at. In this case, the Central Electricity Authority estimated hydropower potential way back in the late 1980s. This estimation did not take into account e-flow, competing needs of society for water or indeed anything else. But any reduction in this “potential” is seen as a financial and energy loss. Any reduction is resisted. But what is not questioned is the very basis of the potential itself.

Secondly, there is the question of cost of generation. Energy planners push for hydropower because they say the tariffs are low and this source provides power during peak demand hours. But they discount water used as raw material and the necessity of a flowing river.

Thirdly, there is the question of making hydel energy sustainable. Currently, the way projects are being executed is disastrous. But if any project is stopped, states ask for compensation—as Uttarakhand is doing—for not destroying the environment. This sets a bad precedent as it induces states to degrade the environment recklessly or be paid to be good. But this also happens because there is no framework to establish the boundaries for resource use. It is necessary to establish sound principles for hydropower development—ecological flow and ideal distance between projects.

Hydrology of the upper ganga river