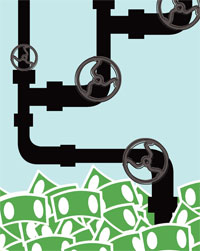 Natural gas as fuel has environmental benefits, particularly when compared to burning coal for power generation or using diesel for vehicles. So when the government increases—in fact, doubles—the price of domestically produced natural gas it has far-reaching implications for air quality and public health. But these benefits do not matter at all in the price-benefit calculations. Government’s rather simplistic logic is that if the price is increased, Reliance Industries, which has monopoly over gas fields and, therefore, holds all the cards, will put in more money in drilling for gas and this, in turn, will mean more gas for use. Simple. But equally simply stupid.

The fact is that if natural gas becomes so expensive that it cannot compete against coal and diesel then it will not be used. In the case of power plants, roughly 20,000 MW of capacity is lying idle for want of gas. Now, even if gas is produced—and there is no guarantee that at the doubled rate Reliance will find more gas—its use in power plants will raise tariffs, rendering power unaffordable. Dirty coal will win.

But we should not be surprised. The health advantage of gas is nobody’s concern.

It was in the mid-1990s that we, at the Centre for Science and Environment, proposed the use of compressed natural gas (CNG) in vehicles because of its low emissions. It was seen as a “mad” idea, with no real takers in the energy business (I can name energy gurus, who are still in places of high power who fretted and fumed at the idea). We were fighting to clean Delhi’s air and it was the only solution at hand. The city’s air was horribly toxic. Catching up with the fuel quality and emission standards then prevalent in Europe and the US would have taken 10 to 15 years. We did not have the luxury of incremental change and gradual improvement in quality standards. CNG had the advantage of much lower emissions. Its introduction, particularly to replace gross polluting diesel vehicles like buses and two-stroke three-wheelers, could provide a leapfrog solution, we argued. But the resistance was unexpected and brutal.

In the beginning it was only the bus and automobile companies that fought against transition to CNG. They did not want anyone to put brakes on the use of subsidised diesel to run private vehicles. A leading automobile company sent us Rs 100 crore legal notice for arguing that particulate emissions from diesel vehicles were a health hazard.

Their arguments did not hold water. In 1998, the Supreme Court ordered that all eight-year-old buses and three-wheelers and taxis manufactured before 1990 would have to be converted to CNG by March 2000. That is when all hell broke loose.

First our adversaries started spreading disinformation on the safety and feasibility of CNG. Leading energy research institutions dished out quick theories on the virtues of diesel and the sins of CNG. Then came the real twist. The then Union minister for petroleum and natural gas, Ram Naik, went on record in Parliament, arguing against CNG use in Delhi. He said there was no gas that could be spared for vehicles. Then, to prove this point, artificial shortages were created.

We quickly pointed out that this was really about deliberate delay in setting up the supply infrastructure. Then another excuse was proffered; government said the production in ONGC wells was declining and there was no gas to allocate to Delhi. The Supreme Court had in the past intervened to allocate gas to save Taj Mahal from pollution. We said it could be done in Delhi as well. Then came the next noxious argument. The minister announced that the price of CNG would be increased to recover investment. Now win for dirty diesel was near certain.

The Supreme Court stepped in once again. In 2002, it asked the Environment Pollution (Prevention and Control) Authority (EPCA), of which I am a member, to investigate if there was any justification in raising the price. EPCA concluded that the price could be reduced and asked for a fiscal policy to incentivise the use of clean fuel in vehicles. It meant taxing diesel and keeping the CNG price lower to allow substitution. Price examination revealed a critical fact: the price of natural gas could be much lower than that of other fossil fuels, simply because producing gas required less capital investment.

Since then, we have found and lost natural gas. First there was excitement. By now Reliance Industries has taken over the underwater gas exploration rights in the Krishna Godavari basin. There was news about big gas reserves. GAIL even proposed a green quadrilateral pipeline to take natural gas across the country. CNG use was proposed for many cities. The squabble was about who would get rights to distribute the gas. But suddenly everything changed. Mysteriously, gas disappeared. Production from KG basin tanked. Technical problems were cited even as oil multinational BP bought stakes in this very gas.

Now even as diesel price is gradually increased, CNG cannot compete after the latest price hike. Maybe there will be gas in India because Reliance Industries will find it even more profitable to look for it. But it will profit over our health. Your and my ill health is on their account.