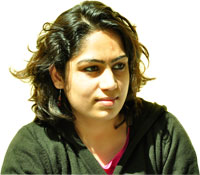 It was quite a role reversal. Moments after my photojournalist colleague Sayantoni and I introduced ourselves to the chief medical officer of Jhajjar district in Haryana, he did what we as journalists normally do. Reel off a barrage of questions.

The first question was new (not what one generally faces while covering renewable energy policy in Delhi), “Bhai-behen kitne hain? (How many sisters/brothers you have?)” and my quick answer was “koi nahi (none).” Astonished but determined to get an answer he turned to Sayantoni. Grin on her face, Sayantoni was also quick to answer that she had just one sister. To establish his point and start a conversation on why Haryana had the least number of girl children (830) under the age of six for every thousand boys and Jhajjar district (774) stood lowest in that statistic, Dr Bhaarat Singh asked our local contact, a professor Ram Kumar of Rohtak university. He had the answer we needed for the conversation to begin. “Bete ka moh kis ko nahi hota! Mere teen bhai hain or do behen hain. (Who does not want a boy. I have three brothers and two sisters).”

We agreed with Kumar and Singh that gender bias runs deep and continued preference for male child was of course a non negotiable reason behind abysmally low child sex ratio–914 girls for 1,000 boys–in India. There has been no denying union home secretary GK Pillai’s statement "Whatever measures that have been put in over the past 40 years have not had any impact on child sex ratio and therefore that requires a complete review." However, the question Sayantoni and I sought answer to was why was the child sex ratio consistently declining; in fact it was recorded as the lowest in 2011 since Independence? Why the preference for male child has increased in Independent India?

We had some inkling of what one of the answers could be from our meeting with two former professors of Population Research Centre of Institute of Economic Growth, University of Delhi, but their indicative answers got reiterated with a visit to Jhajjar. SC Gulati and Ashis Bose, whom my colleague Sambhav and I had met before going to Jhajjar, pointed out that the cost of “bearing and rearing the child had gone up tremendously but the preference for male child still remained.” Female foeticide, according to Gulati, contributed maximum to this drop. Bose hinted that food inflation could be a factor but both of them recommended us to wait for the complete census data before drawing any conclusion.

We put this question to Singh for he had experience as a government medical practitioner across Haryana and he had been instrumental in identifying and conducting proceedings against doctors who carried out sex determination tests in the past. Singh drew us to the same answer. "In the past decade, there has been a shift to one or two child norm because neither a stagnant income-earning farmer nor a salaried family can raise more than two children. Land holdings are reducing for each family, so most families want one boy," he told us.

He further mentioned some "secondary issues" of dowry and increasing crime against women in Haryana. The hospital roster he prepared while talking to us said more about the extent of crime than what the police records reveal. For the past couple of years the roster was prepared considering 2-3 cases of rape each month in the Jhajjar town government hospital. Another "obvious answer" to our questions was that the access to technology for sex identification of a baby growing in the womb.

Yet even a fair bit of questioning was useless in getting Singh to shed light on magnitude of female feoticide in the district. But he did direct us towards Bahrana village in which 55 girls took birth in the local public health centre against 158 boys in 2010, in other words, 378 girls were born for every thousand boys.

About 50 km from Delhi border, amidst over 10 peacocks and over buffalo’s milk, chat with some of the women from this village reaffirmed the link between price rise and female foeticide. “Almost stagnant foodgrain production, falling water table and decreasing size of land holding for each family is what we women talk about when we meet in the village,” said Sheela Ahlawat, daughter-in-law of former sarpanch Prahlad Singh. Sheela’s supportive family is why her two daughters and one son study in local school.

Sheela knows many families in the village that get hysterectomy operation done if their first child is a boy. “But if a family’s first child is a girl, collective breast-beating in the family over the cost of bringing up the girl, safeguarding her from rapists or worse case, if she has an affair and paying for dowry when she grows up starts and the only known rescue from that scenario is a visit to any of the clinics in Rohtak till the woman is sure a boy is growing up in the womb,” Sheela said. Immediately after the second child, a boy is born, majority of women get hysterectomy operation done. Maxmimum a person can raise is three children in these days of rising prices.

When some of the villagers like Subedaar Satyanarayan Singh, who got his daughter-in-law’s hysterectomy operation done after she gave birth to a girl, came out in opposition to the practice of feoticide and set up an example. On his insistence, the panchayat passed a resolution last year to “treat girls and boys like equals.” Many women in the village and Satyanarayan himself are not sure if the resolution made any difference. “The land holding of some family’s in the village has dropped to less than an acre and they want one boy who can inherit it but they don’t have the money to raise another child.” That, according to Subedaar, may be the reason why most of the 158 boys born in the village were first born.