Global democracy tilts at the axis

Are the "forces of freedom" in the West muscular enough to deepen democracy at the global level? 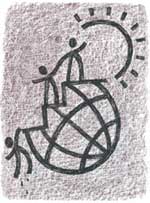 THE World Summit for Social Development, held recently in Copenhagen, was convened to discuss 3 of the most critical issues facing humankind today--poverty, unemployment and social exclusion. Three UN official statements, prepared by NGOs prior to the Summit, were considered for the final NGO statement--the Oslofjord Declaration, the New Agenda for Social Development from the Alternative 7 Summit, and Twelve Points to Save the Social Summit: An NGO Statement. They discuss issues like debt, trade, international financial institutions and the World Trade Organisation, from the point of view of the poor and powerless of the world.

But the organisation of the Social Summit itself is a global process that we must not overlook. These inter-governmental and non-governmental meetings are early experiments in global democracy. These meetings bring governments as well as NGOs from all over the world together. We articulate a bewildering range of views and demand an equally bewildering range of actions. It is true that vested interests are too powerful for many of our "Utopian ideas" to be accepted. But often a global forum does get created which allows us to express the concerns of the last man and woman, as Mahatma Gandhi would have probably put it.

If the problems we have identified are real, then our ideas will certainly get recognition--ideas that already exist in the various NGO statements put before the Social Summit. "Ideas," as an eminent Scandinavian social thinker, Gunnar Myrdal, once told me, "are like time bombs, when will they explode, who can tell?"

The strong roots of democracy in the Scandinavian countries have strengthened the NGO movement worldwide and allowed it to represent the majority of the world's poor and powerless. I can never forget the Indian head of an UN agency complaining to me more than a decade ago, that these countries were unnecessarily pushing NGOs into his agency's work. I am glad that they continued their pressure and today the NGO movement is much stronger. The democratic roots of these countries have also forced their governments to function more like NGOs in the community of the world's governments, standing up for social justice and sustainability worldwide.

Today the bipolar world has disappeared with the demise of the Soviet Union. Will there continue to be sufficient pressure on the industrialised nations, to put a human face on their capitalist foundation, or will they give up their democratic trappings? Is the rise of Republicanisms in the US a sign of this counter-trend? In fact, one can ask: are internal democratic forces in the West strong enough to sustain democracy? A country as rich and powerful as the US still does not have a system that ensures health for all. The absence of such a legislation is a sad sign of capitalism still struggling to deal with issues of social justice even in an environment of extreme wealth.

If there is any truth in my 1st question, then my 2nd question becomes even more relevant: are the internal democratic forces in the West strong enough not merely to sustain democracy internally, but also to deepen it at the global level, in terms of human rights and economic rights? Will the people and leadership of the West accept freely that Structural Adjustment is most needed in the North, where the national ecological accounts are showing a deep deficit? We today face a destabilisation of the global climatic process.

My NGO friends may disagree with me when I say that nothing is wrong with Structural Adjustment per se. But it is a fact that the southern elite have been overspending their foreign exchange, creating foreign exchange crises and huge external debts. So why should anyone reduce the debt of the gluttonous rich in the South, who care little about the poor in their own countries? Let them work hard and pay off the debt they have incurred.

Social integration is a key issue before this Summit. But nowhere has it been said, that social integration begins, with only mutual respect. The Oslofjord Declaration rightly says that "cultural diversity is a universal good" but does not go much beyond that. Do we all truly respect other cultures? Let me ask this question: who has made the biggest economic contribution to the whole world? Strangely the answer is the poorest, most persecuted and most brutalised people on earth today--the American Indians. How many people in the world have used Ford's motor cars or Bill Gate's Microsoft computer software? Many millions, undoubtedly. But nowhere near the billions who have eaten potatoes or corn. So why don't we respect the profound "botanical knowledge" of the poor, which has given us life itself through nutrition and many answers to medical problems?

The educational system in the South, built upon borrowed concepts from the North, has destroyed us to the point that it was not Indian scientists who discovered "reserpine" from rauwolfia serpentina or azadirachtin from neem. It was Ciba Geigy and a German scientist, respectively. If we truly want social development of the South, then we should probably take the extreme step of banning any Southerner from going to school in Oxford, Berkeley or Harvard, where whitewashed black, brown and yellow agents are produced. These people look upon the South with Northern eyes, rather than looking upon the North with Southern eyes.

The poor don't need "development". They need "respect". They need "compensation" for the knowledge and resources that have been forcibly taken away from them. They can then grow on their own. I think there is still a lot to learn from Iavan Illich*** about Deschooling Society and about the role of the Disabiling Professions. It is interesting that even in recession, the North never talks of economic development for itself. It only talks of economic growth. Another example of diplomacy by terminology.


After respect, the second most important thing the poor need is empowerment. In a global situation, full of market failures, where social and ecological costs are externalised, we definitely need state interventions that will force the market to work for the good of the majority. I strongly believe that we need a universally guaranteed Global Right to Survival, not through a programme of dole, but one of work so that the poor can use their labour to regenerate their destroyed ecology.

A key point made in the Oslofjord Declaration says, "Governmental decisions affecting communities should be taken as closely as possible to, and after full consultation with, the communities themselves." I totally disagree with this statement because it still adopts a "statist" attitude. I believe that the words should be: "Governments must create governance systems that empower communities to take decisions about issues that affect their lives and their natural resource base themselves."

I conclude with the fascinating story of the Gond tribals of central India. It is the forested land of the Gonds--the Gondwan, that has given the name of the oldest landmass, Gondwanaland. During a village meeting, when several youngsters were arguing that the provincial and national governments were betraying them, an old man asked: "Then whose government do you think it is in Bombay or New Delhi?" The young men were annoyed at the audacity of the old man and retorted: "You tell us, wise old man. What do we know?" The wise tribal put it in his words, "Dilli aur Bombai men hamari sarkar, aur gaon mein ham hi sarkar." (In Delhi and Bombay it's our government, and in villages we are the government.)

This will lay the foundation for participatory democracy and human-centred and green social growth. This is the only way to control market-determined growth.