It is difficult to find simple remedies to complex problems, not because such remedies are hard to find but because they are often overlooked. To check global warming, German chancellor Angela Merkel offered an apparently simple solution at the recent G8 summit at Heiligendamn, Germany. She proposed that member nations cut down the 1990 level of greenhouse gas (ghg) emissions by half by 2050 so that the world's average temperature rise due to global warming does not exceed 2c. But the us shot down Germany's proposal. No doubt, it has its own hegemonistic concerns and perceives economic threats from two rising Asian economies, India's and China's. Till the world arrives at a consensus, ghgs will continue to pollute the atmosphere. undp's Human Development Report 2006 on power, poverty and the global water crisis, says even if all emissions stop now, the rise in temperature will continue as an effect of past emission. And should present trends continue, co2 concentration in the atmosphere will rise to 500 part per million (ppm) by mid-century.

But can environmental audit be meaningful if it ignores the rising indices of consumerism? Discussions on environmental degradation generally revolve around use of inefficient technology, carbon emissions, ozone depletion, ghg effects and technological solutions to bring them back to a sustainable level. These processes address only the front end of the problem. The back end is, however, more serious. To fix it, we'll have to find egalitarian and sustainable levels of consumption which may serve essential human needs without disturbing social and environmental harmony.
Consumerism churns out artificial needs. To fulfil those it offers products which are marketed as objects of desire. But they consume resources through production, distribution and disposal and thus affect the environment. Marketing the artificially-created need itself takes huge amount of resources and energy. Leaving aside consumption of resources in production and distribution, if we just calculate the energy consumed in selling consumer products through repeated advertisements in various media in a day, it would be enormous. Similarly, the energy consumed by multiplexes in malls, hoardings, neonsigns, the icons of consumer culture, is too substantial to ignore. But we feel more concerned about vehicular and industrial energy consumption and pollution and not lifestyle sources and their environmental impact. "Consume till you doom" does not figure in the agenda of the environment debate. 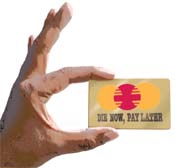 The growing consumption mania and craving for such products in big countries like India and China is also having social fallouts. The May 31, 2007, issue of The Economist says there were close to 70,000 recorded cases of civil unrest in China last year due to a growing sense of inequality created by a consumer culture. Although the gap between rich and the poor in China is relatively low, it is increasing. When it comes to tackling problems of social and economic equity, these countries suffer from contradictions. On the one hand, China opens the second Millionaire Fair in Shanghai to showcase ultimate luxury products, but, on the other, premier Wen Jiabao rails against big homes. Xinhua, the Chinese government's mouthpiece, criticises big spenders for being intoxicated with comfort and drowning in depravity.

Thanks to its growing middle class, India as a lucrative marketing destination for consumer products is also not lagging behind. McKinsey Global predicts that the average income of the Indian middle class will treble over the next two decades and the country's 300 million below-poverty-line population will be elevated above this line. Encouraged by growth trends, the Luxury Marketing Council--an international consortium of 675 luxury good firms--opened its India chapter in October 2006. Luxury brand conferences are also being organised in India by many corporate houses.
Can a country of over one billion survive the environmental side-effects of such unrestrained consumption? Can it be high on production and consumption indices without being even higher on environmental degradation index?

By 2015, a substantial number of people will have access to more cosmetics, more cars, more lifestyle products and more malls. In such a situation if the social factors leading to the rise in consumption are not restrained, will we able to control global warming?

Mihir Bholey is a communication specialist associated with the National Institute of Design, Ahmedabad