Goa, the name evokes images of sun kissed beaches, parties and tourists. Is that all there is to Goa? For most of us, yes. It’s not so for others.

The other face of Goa is hidden. It sits in remote areas of the state. On my way to Sanguem in south Goa, my contact, Ramesh Gauns, tells me, “now you'll know what real Goa is”. As I pillion ride on his bike, I have already forgotten his words. I'm busy admiring the roads, the sea, the coconut palms and the pristine beauty of the place. Gradually the landscape starts changing. I see a lot of green—hills covered with forests. I tell Gauns that I never realised Goa also has forests. He smiles. We stop at a temple and he makes a quick call while I click pictures of the temple. He says, “this is what we get from mining companies—God's blessings.” I'm unperturbed and we are on the move again. Shortly, we spot a Mahindra vehicle and a lean gentleman next to it. As we approach, he straightens and flashes a smile. I get down and he is introduced as “the brigadier” or Rama. We leave the bike and get into his car. 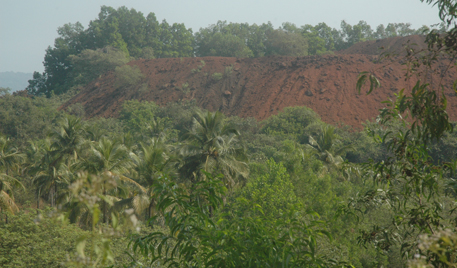 In the midst of their banter in Konkani, we enter a thick forest using a narrow road (if I may call it that). It is the Colamba protected forest. Brigadier tells me all kinds of animals can be found here, from barking deer to tigers. I choose not to believe that. Through my travel experience, I have come to realise that wherever there is a forest patch, the area residents claim there are tigers. As I'm lost in these thoughts, I spot four langur monkeys—white and long-tailed. I'm impressed. As I try to take a picture, they vanish into the trees.

Another 500 metres and the road becomes narrower, the forest thicker. We enter the Curadi protected forest where the roads acquire a slight red tinge. “Is this a mining road?” I ask. Rama nods. I'm left wondering who in his right mind allowed a mining road through this thick forest. More Konkani chatter follows. Rama abruptly stops the car and points towards two iron ore dumps. I take more pictures. The road, I figure, has become wider and changed to a deeper red. The vegetation on both sides of the road have also been dyed the same colour. It's difficult to find a single green leaf on either side of the road. 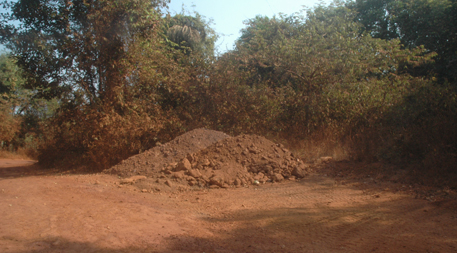 The snake-like road has a downward gradient and Ramesh tells me the truck drivers are paid a tip (Rs 700 per trip) if and when they manage to transport the ore using this road. The uphill climb for a loaded truck, Rama says, is both risky and tiring for the driver; hence the reward. This, he tells me is the “short cut” that enables them to make three trips as opposed to one if they were to take the subscribed route. We cross a booth, which, Rama informs, used to be a weigh bridge at one time from where the trucks carrying the iron ore would pass. We stop and when I look around, behind the trees I see a mountain cut into facets. “This is the closed mine of Shanti Lal and Khushal Das brothers”, says Rama. I want to interrupt and say it is not closed, it's been scarred and abandoned (closed mines are refilled and vegetation over them regenerated, as per rules), but I choose to remain silent. The brothers are merely the mine lease holders while the mine is actually being operated by a minister, alleges Rama. I’m speechless. 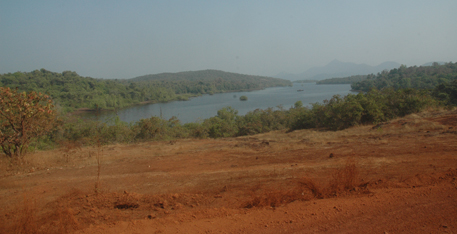 We resume our journey shortly only to stop again when I see a beautiful water body—the Silaulem reservoir. Ramesh says that 45-50 per cent of Goa's population depends on this reservoir for their drinking water needs. On going further I see there is mining happening right on the banks of the reservoir. I could make out there is no way the reservoir can be protected from the impact of mining. We park the car and I express my desire to go closer to the dump site to take better pictures. Rama tells me that the dumps belong to the Timlos who held the mining lease, but that real miner is Kareem (contractor). We dismount from the car and I suddenly see two security guards rushing towards us. They look agitated when they find out we are not from the company. They try and tell us that since the entire land falls under the mining lease, we have no business there. Rama tries to reason with them that the mining is on hold and we mean no harm but only wish to take a closer look. The security men refuse to budge. 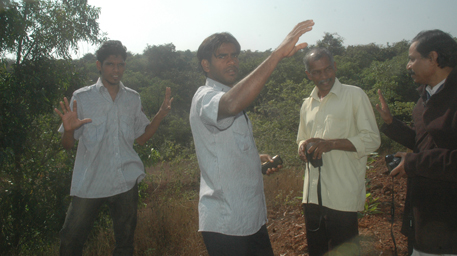 I stay clear of the argument and am trying to take pictures when one of them runs towards me and blocks my view with some Konkani instructions. I politely tell him I do not speak Konkani. He almost tries to snatch my camera but I manage to foil his move. Rama intervenes and a heated discussion ensues. After 20 minutes, I give up and we decide to leave. The guard tells us that they have been instructed not to allow anyone at the premises at any cost. The security person tries to take pictures of the three of us using his mobile camera and says it's a part of his duty. I'm unfazed and manage to conceal my face. Not that I'm scared but I hate the idea of a stranger in possession of my picture.

I'm very disturbed for I fail to understand what made the security men act so aggressively? Why have they been given the freedom to be goons? What is the government thinking and doing? Obviously, very little. The reservoir was supposed to provide drinking water but today it serves as a dumping ground for the miners around, why? People trying to go near the reservoir are threatened; then what if a local wants water from there? Isn't that what it was supposed to do? I do not find any answers.