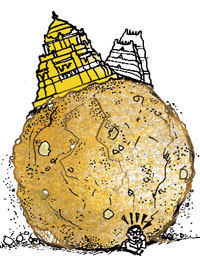 So, the Tirumala Tirupati Devasthanam (TTD) which runs the country’s richest temple at Tirupati in Andhra Pradesh has finally won its case to have a Geographical Indication (GI) or appellation for its laddoos. It has taken close to four years for the legal questions raised over the GI tag for a sweet sold at a temple to be brought to a close—and it has ended on a farcical note. None of the substantive issues that were raised by the petitioners have been answered.

Over the years’ legal challenges to the GI for Tirupati laddoos had been filed at the GI Registry in Chennai which hands out these tags and in the Madras High Court, not to forget an impassioned letter sent to the Supreme Court. Most of this was a one-man campaign by scientist Praveen Raj who works with the National Institute for Interdisciplinary Science and Technology in Thiruvananthapuram.

He had argued that GI registration of goods produced by private entities would defeat the spirit of GI protection, which is meant for safeguarding, preserving and promoting collective community rights as opposed to private monopoly rights. Although exclusive intellectual property rights are granted for patented products, these have to prove their industrial applicability, according to Raj who has also had a stint as examiner with the Indian Patent Office in Chennai.

No industrial purpose is served by the grant of “goods” status to a temple offering, he had contended. The laddoos, by TTD’s own admission, are offered as prasadam (sanctified food) only to the devotees who visit Tirumala to worship Lord Venkateswara, the presiding deity. Therefore, the said laddoos do not deserve the status of “goods”. Besides, a GI tag on prasadam is an example of commercialisation of divine affairs and would inspire other temples to follow the Tirupati example, and thus lead to “irrevocable damage to the values of society”. Let us ignore the last point—who can deny that religions and places of worship for the most part are already commercial enterprises these days?—and look at the response of the GI Registry to the substantive issues which have been much debated in intellectual property forums.

To start with, it says Raj has no locus standi in the matter. Its reasoning: the applicant is “not even involved in the same trade or manufacturing a similar GI product” and, besides, he resides in Thiruvananthapuram (Kerala) and has no geographical connection with Tirupati Tirumala in Andhra Pradesh. In other words, citizens have no right to challenge GI appellations unless there is a direct commercial interest. And not content with this, assistant registrar Chinnaraja G Naidu has some truly ingenious responses to other crucial points.

How could there be monopoly rights when the laddoos are produced by the collective effort of all the employees of TTD and is not the produce of a single person, he asks. To cap it all, the registry accuses Raj of seeking shameful publicity by using his official position in the correspondence sent to the registry, and imposed a cost of Rs 10,000 for his “reckless, irresponsible, immature attitude”.

To the lay person all this fuss over the ubiquitous laddoo that marks every kind of celebration in India would seem odd and pointless. And most people are unlikely to comprehend why a GI matters although industry has in recent years felt its impact. Manufacturers of whiskey can no longer pass off the home-grown stuff as Scotch. Or sparkling wine as champagne. Such labels, which had become generic over the decades, are now reserved for the real McCoy: Scotch comes only from Scotland champagne from the eponymous region of France. And of course, Darjeeling tea only comes from that region.

GIs are much sought after because they allow producers to obtain premium prices for certain products although such tags are also intended to protect traditional knowledge and community rights, a fact which appears to have been overlooked by the Chennai registry.

In its reckless zeal, it has granted a large number of appellations to government organisations and to outfits like TTD rather than to community organisations. The laddoo, in fact, is a prime example of the faulty logic the registry employs and the curious means it uses to justify its actions. It actually set up an expert committee to study how the laddoos were made and decided the divine dispensation under which they were produced made them eligible for a GI. TTD is said to make an estimated Rs 40-Rs 50 crore from the sale of laddoos and clearly strong commercial interests are at stake owing to competition from “counterfeit versions” sold by the legion of hawkers in the temple town.

Wasn’t a trademark more appropriate in this case? But what is curious is Raj’s last-minute indifference. When the registry finally set a date for the rectification plea after years of delay why did he not attend the crucial hearing? A pity that he ran out of steam in the final lap.