A unique experiment to involve the people in bringing water to desert communities is under way in Rajasthan. 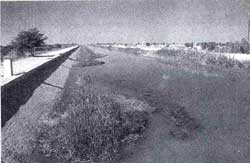 FOR CENTURIES, the people of western Rajasthan have depended on uncertain rain for their feeble attempts at settled agriculture and for drinking purposes. The scarcity has given the people a sense of conservation that is remarkable by modern standards. Children are bathed in shallow metal containers and the water is then mixed in cattle feed. The other ingredients of the feed are mainly crop residues and by-products. The straw is based on traditional crops that have a very high protein content. Dung is collected and used as fertiliser and fuel -- fine examples of recycling.

The management of water was also woven into the fabric of life. Usually, a village would settle around a dug well. Water would be drawn by camels and emptied into a trough near the well, from where the animals could drink and the people could fill their matkas (earthenware vessels).

This system had two major advantages. The water source remained functional for years as it was exploited so slowly that the water table got recharged in the good monsoon years. The other advantage was that the responsibility for maintenance was spread across the board, irrespective of caste or class. What mattered was how many aangas , calculated on the basis of equivalences -- one cow was equal to ten goats or two adults -- a person was responsible for. The process of selection was carried out in front of the entire village. Of course, there must have been free-riders even then, but by and large, the system worked and it was rare for entire villages to be evacuated or migrate in search of water.

Today, things are not the same. Many villages in the Thar desert have got their own captive water source -- either a tube well or a pipeline from the Indira Gandhi Canal. While this has eased the burden of women and the poor, the shift in ownership from the people to the government has engendered a sense of helplessness and dependence. It is not unusual to find people watching water drip from broken taps, unconcernedly waiting for the "water works" to repair it. Or waiting for the electricity board to fix the motor. Or, if nothing works, for the collector or the tehsildar to send in a tanker.

What then is the solution? Villages don't hold together the way they used to 50 years ago. It would indeed be difficult to find a village where there's a common platform to sort out differences. As the cult of the individual developed and markets found their way into these small desert communities, everything is now traded, bought and sold, even milk, water and labour -- things once considered a sin to sell.

In this context, the new scheme of the Rajasthan government to provide drinking water to a "saline" belt in Churu district, using piped water from the Sava Lift of the Indira Gandhi Canal, merits attention. Probably for the first time, the government has looked at the "software" aspects of water development by trying to work out how people would relate to water in a changed environment. The massive German Bank-funded project, worth $60 million, would provide drinking water to 22,000 households in 365 villages between 1995 and 2000.

The implementation of the "hardware", including the laying of pipes and building of stand posts, would be carried out by a project management cell headed by an additional chief engineer based in Churu. This in itself is revolutionary because decisions can be taken on the spot. One often finds that power tends to move to Jaipur as one moves up the hierarchy and a lot of time and public money, in form of travel and dearness allowances, is wasted to hold the project together.

There is also a community participation unit, staffed by people from a consortium of non-governmental organisations (NGOs) working in the area. The Jaipur-based Indian Institute of Health Management Research is to develop agreements with participating NGOs. Staff from the NGOs, to work for the project for 5 to 10 years, would be responsible for building up an institutional base for the management and ownership of the water scheme. This would include identifying competent people, training them and instituting a system of cost-recovery and maintenance.

In addition to the piped water system, the project will support attempts to revitalise traditional rain-water harvesting structures as standby facilities. The scheme would be on offer to all villages on the route and in case there is lack of commitment from a village, it would be bypassed. However, officials of the public health department (PHED) feel this to be an unrealistic assumption as political forces would make bypassing impossible.

The real challenge is at three levels. First, is a "franchise" approach possible for this kind of institutional development work? Would it be possible to set up jal samitis (water councils), for example, in the same way as milk societies were set up in Operation Flood? Unlikely, because in the case of milk or any other commodity, people are linked together by individual economic interest, whereas in the case of water, it is a question of dealing with equal access to a public good. How would women be involved in setting up the common facilities? How would it be ensured that the scheduled castes, in a hidebound, conservative, caste-ridden society, have access to the "common" facility? It will probably take longer to work out these intricacies than lay the pipeline.


Second, there is the challenge of getting the NGOs to work with PHED. Will NGOs turn a blind eye to kickbacks and carry on with the task of community participation? Conversely, how would PHED officials relate with NGOs, who they view as fly-by-night operators making a quick buck at the expense of the state?

The third challenge is within the NGO camp. Coming as they do from fairly developed ideological positions -- each at different points of the spectrum -- would they be willing to "submerge" individual values and become a part of a central planning unit? And, within this unit, can a "common" management style be worked out to keep the whole team inspired, suited as they are to their individual work styles and respective organisational cultures?

Notwithstanding these riders, the attempt by the government to involve the people in the planning, design and management of the state-built water system is laudable. There are lessons to be learnt from state-NGO collaboration and more importantly, from the micro-experience of how people can collaborate in managing public properties.

Sanjay Ghose is the secretary of URMUL trust foundation in Bikaner, Rajasthan.