Gone to the shepherd in the sky 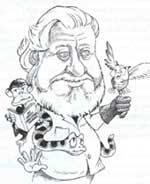 THE world lost a champion animal lover when Gerald Malcolm Durrell passed away on January 30, 1995. His collection of rare wild animals was recognised as the first of the new breed of conservation zoos, committed right from the start to the captive breeding of endangered species.

He will always be best remembered for his caricatures of his family and its collection of animals on the Greek island of Corfu in his popular book, My Family and Other Animals. His pompous brother, Lawrence Durrell, who was a well known English novelist of the post-war period and whose creation includes a tortoise called Achilles, with a passion for strawberries and human company and a musical pigeon called Quasimodo, were only some of the characters that endeared the Durrell family to readers around the world.

Gerald Durrell was born in 1925 in Jamshedpur in India. The youngest of 4, he spent his childhood in India, in England and on Corfu, where he befriended the Greek scientist Theodore Stephanides, who guided him in many of discoveries there. Durrell's mother's initial attempts to hire tutors to provide him with some sort of education were thwarted by his one-track obsession with natural history.

After a 5-year sojourn at Corfu, Louisa Dixie Durrell finally decided that her son needed a formal education, and Durrell was packed off to a public school in Britain. This forcefeeding did not last very long, as his interests were focused elsewhere, and after being branded the "most ignorant boy" by his headmaster, he left school and, much to his satisfaction, found work in a pet store. Later, he went on to join the staff of Whipsnade Zoo in 1945.

But writing, and later making films for television, were his means of earning enough to indulge in his real passion for wildlife. He called writing a "necessary evil" and put everything he earned into the Jersey Wildlife Preservation Trust (JWPT), a zoo which he founded in 1964, devoted to the preservation of endangered species. The Trust has been responsible for bringing back at least 4 animal species from the brink of extinction.

In 1946, a legacy of L2,000 from an aunt allowed Durrell to embark on the first of many wildlife-watching and animal-collecting expeditions. It was the inspiration behind The Overloaded Arc, one of his 37 immensely popular books. His love for animals and collecting expeditions greatly motivated him to gather enough funds and set up the Jersey Zoological Park. This soon became the island's most popular tourist attraction.

He had an ongoing battle with naturalists who objected to the JWPT's captive breeding projects, which entailed the propagation of endangered species, research in captivity and in the field, and, finally, their reintroduction to the wild when it was considered safe and wise to do so. Durrell's critics were silenced by the JWPT's spectacular success in saving the Mauritius kestrel. With only 4 individuals known in the wild and none in captivity, the Mauritius kestrel was, in 1974, regarded as the world's rarest bird. A combination of wild and captive measures by the JWPT ensured its survival, and about 200 released kestrels are now hunting and breeding in the wild. The Trust has since then been successful in reintroducing a number of endangered species, including the golden lion tamarins to Brazil, pink pigeons to Mauritius and midwife toads to Majorca.

In 1976, Durrell set up a mini-university next to the zoo where he provided intensive animal conservation training for overseas scientists and fieldworkers. He was completely dedicated to the cause of wildlife conservation and felt the need of a basic infrastructure to support the whole conservation set up. The director of London Zoo, Jo Gipps, told The Guardian, "I don't think you could overestimate the contribution Durrell made to the way zoos redefined their role in the last 20 years."

An interviewer from the same newspaper once asked him why he spent huge amounts of money in the hope of saving 1 or 2 exotic species from extinction. Gerald Durrell replied, "Look at it this way. Anybody who has got any pleasure at all from living should put something back. Life is like a superlative meal and the world is like a maitre d'hotel. What I'm doing is the equivalent of leaving a reasonable tip."