Good but not true

The United Nations does not take into account sustainability of the environment in assessing progress using the Human Development Index, casting serious doubts on the accuracy of the method 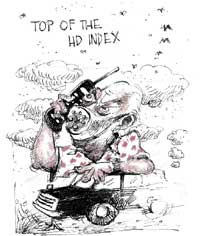 the Human Development Index ( hdi) developed by the United Nations Development Program ( undp ) has been widely accepted as a powerful analytical tool by planners, economists, and policy-makers to assess the progress of nations. hdi enables a comparative assessment of the efficiency and effectiveness of development strategies among nations.

Considered a major landmark in the sphere of development economics, the hdi helps in monitoring the status of human development and identifying problem areas where remedial action can be directed.

These indicators do not seem to reflect the state of environment, which is highly relevant to the concept of 'sustainable development' as both 'means' and an end. Failure to include the environment as an important 'means' to achieving human development is an issue that requires utmost attention.

The popular argument given for not taking 'environment' into the list of hdi indicators is that it is accounted for while calculating longevity, implying that a better environment leads to a longer life. Another explanation is that access to the environment is covered reasonably well by the income indicator. Answering the second argument first, it would be misleading to assume that the presence of income always ensures accessibility to the means of development . This is more so when the means of development are public goods, as is the case with the environment, which is generally public property.

Regarding the first argument, it is well accepted that a better environment leads to a longer life. However, it would be incorrect to assume that longevity by itself covers all aspects of the environment. The issue of whether or not the current means of human development are environmentally and ecologically sustainable is nowhere reflected in the hdi .

The possibility of being misguided by the hdi can be better illustrated with the following example: Consider two countries A and B, with country A having a higher Gross Domestic Product ( gdp) than country B. Let us assume that the major source of income for country A is from timber trade, which is steadily leading to deforestation, and that agriculture is the main economic activity of country B. Under the present system of calculation of hdi , there is every possibility that country A will be ranked ahead of B as its gdp is higher. However, in reality, the path of development being pursued by country A, in the long run is bound to have a deleterious effect. Country B, despite having a lower gdp, might be following a path of sustainable development and hence deserves to be placed above country A. Thus we see that an hdi that does not incorporate the indicators of sustainable environment is capable of misleading us.

Sustainable development is not just another kind of development, or an alternative to the current modes of achieving a good rate of economic growth. It forms the axis that supports all forms of development initiatives. It also follows that any attempt to quantify the level of human development without taking into account the sustainability of environment, would at best qualify as an academic exercise.

Ramanathan B is a Bhopal-based natural resource management consultant.