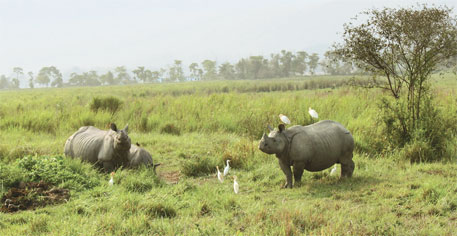 In recent years, there has been much debate around the greater Indian one-horned rhinoceros, Rhinoceros unicornis, in conservation circles in Assam. Poaching is a major threat to the rhino population in the state and quite naturally, a lot of effort has gone into anti-poaching measures. Not all the measures have, however, relied on scientific studies. The recent use of unmanned aircraft to monitor national parks failed and was, justifiably, criticised because public money was wasted. Earlier, some NGOs had suggested deploying imported sniffer dogs to trace movements of poachers. The latest in the series is a proposal by the state forest department to remove horns of rhinos to decrease the intensity of poaching.

According to media reports, the proposal was discussed at a meeting of Indian Rhino Vision 2020 programme in the last week of January. The idea is at odds with scientific ethics. Besides, the discussion ignores earlier studies on dehorned rhinos. If the proposal is adopted, this will be the first time India will have a programme to dehorn rhinos. So, experts in question should review studies that have analysed dehorning as a measure against poaching in Zimbabwe, Namibia and Swaziland.

One such study is mentioned in Carol Cunningham and Joel Berger’s Horn of Darkness: Rhinos on the Edge. The book takes us to the cutthroat world of conservation politics, it describes the conflict between nationalistic impulses and Western science and tries to understand the complexities of trying to save endangered large mammals in Southern Africa. The Namibian Save the Rhino Trust succesfully argued that removing horns of the animal would eliminate any incentive to kill them. But Cunningham and Berger have found that at times, poachers cannot distinguish between animals with horns and those without them. Besides, dehorning makes rhinos vulnerable to predators like lions or hyenas; dehorned females cannot protect their calves.

The evolutionary significance of horns in rhinos is not entirely clear. We do not know if rhinos use horns to attract partners, or use it as a defence mechanism. But studies by American zoologist Janet Rachlow on white rhinos show that about 90 per cent of the dehorned animals were poached within 18 months as the horns grow back very quickly. This is because a stub of horn is left even after the horn is removed. Leaving the stub is, of course, necessary—if the horn is cut too close to the germinal layer, the animal’s horn base could be damaged and the rhino could bleed to death or die of shock. In fact in Majuli in Assam last year, a rhino died after forest authorities without proper expertise surgically removed its horn.

Berger and Cunningham note in a Conservation Biology paper—co-authored with Archie Gawuseb, Malan Lindeque—that horned and dehorned rhinos do not differ much in terms of vulnerability to poachers four years after dehorning. Quite naturally so, because horns grow back.

Dehorning has been debated for more than a decade in conservation circles and the efficacy of the measure remains contested. There is a paucity of data and even more significantly the ecology of rhinos in Assam has not been studied seriously. So anti-poaching measures such as removing a vital part of the animal without proper research are likely to do more harm than good.

Order: Order of the National Green Tribunal regarding suspension of movement of trucks during night time during monsoon season on a stretch of National Highway 37 running through the Kaziranga National Park, 15/04/2014

Feature: The current state of rhino in Assam and threats in the 21st century