During the initial phase of the COVID-19 lockdown, India was the 15th worst-hit country in the world

As the novel coronavirus disease (COVID-19) broke out, the domestic and international media kept an eye on the increasing number of cases from India and other key countries like the United States, Spain, Italy, etc.

In India, the first cases were recorded on January 30, 2020 from Kerela. A continuous spike was then observed in the number of cases, increasing to 165,799 on May 29.

During the initial phase of the first lockdown, India was the 15th worst-hit country in the world. The Union government claimed the number of cases were relatively lower than the 14 countries above India.

This relatively low number of cases reported from India was used loosely and promulgated facetiously either by the media to praise the effectiveness of the measures taken by the Union government or by representatives of the government to credit mitigation measures. 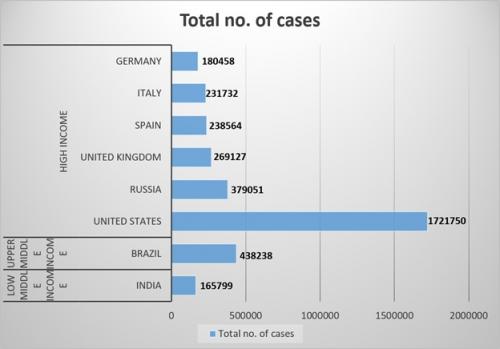 While addressing the press on March 30, Lav Agarwal, joint secretary in the health ministry, compared India’s situation with other developed countries with reports of higher cases.

He also attributed government measures like the lockdown and social-distancing for the low number of cases. These measures have undoubtedly curbed the growth of infections to a considerable degree, but the question is whether India really outsmarted other superpowers with its strategies and whether such a comparison among countries with different economically driven situations was conclusive.

The above question gives rise to a series of other questions: Do the countries being compared have different economic conditions and how? If the comparison is not preferable, then does the difference in economies of the countries make this comparison surprising?

India became the eighth-most affected country, as of May 29, according to the global time-series data available. It outstripped seven countries in a month.

This is sufficient to disgrace assertations being made two months earlier and now, I propound data from two different temporal points (from April 28 and May 29) to make my stance vivid on the inconclusive comparison made among countries.

Total number of reported cases as of April 28 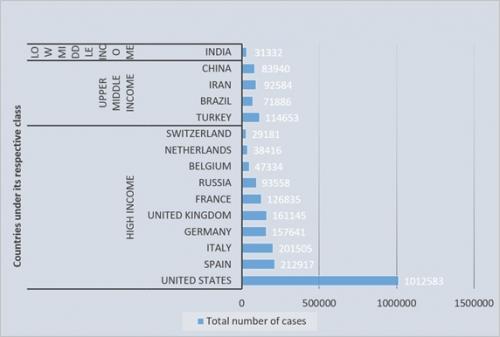 The World Economic Situation and Prospectus (WESP), a pivotal publication of the United Nations, classified countries into four categories — high income, upper-middle income, lower-middle income and low income — based on per capita income.

Among the countries found to be highly inflicted by the pandemic, India is the only one under the lower-middle income category, according to the classification.

The rest either belong to high income or upper-middle income class.

These classes indicate the degree of competency of the market of a country for making multi-sectoral profits. A country with a stable economy will attract more investors, facilitate developing better educational and professional environments, inter-boundary business opportunity and eventually more influx of people to and from the country, than a country with low economy.

When COVID-19 reduced China’s economic might, other countries were suspectable to the disease differently.

Countries with high influx of people or transboundary movement were more vulnerable to the disease, compared to the country with a low influx rate.

This pattern is evident in the time-series data at different temporal points and also in the 15 countries that are taken into consideration for this study.

I analysed data of different temporal points from India’s pre-lockdown phase and found the infection in India propagated at a relatively lower rate.

Total number of reported cases as of March 24 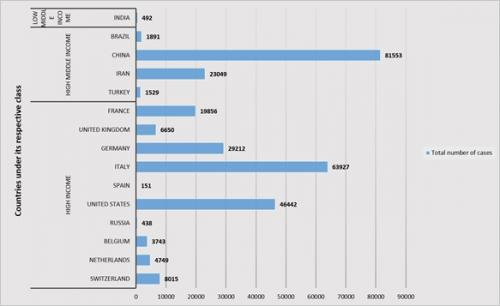 The same pattern was also observed on March 14, which shows how the SARS-CoV-2 virus behaved differently in these countries according to their people influx rate which was determined by their economical status.

As the number of cases in these countries was already higher than India before lockdown and the difference in the resultant rate of infection was also found prevalent across the economy-based classes suggested by WESP, the direct comparison of the number of cases between the countries to score the mitigation strategies taken will either be misleading or inconclusive.

Although the direct comparison is inconclusive, it doesn’t mean stats between two classes can’t be compared. A comparison can be done with an index that accounts such inherent difference between the classes.

In the absence of such indices, it is preferable to have an intra-class comparison instead of inter-class. Following this, when the number of cases from India was compared with its analogous countries ( countries of lower-middle income class) at both temporal points, both times, the number of confirmed cases were found highest in India.

Undoubtedly, India has the highest number of COVID-19 cases among its analogous countries.

The comparison has reduced inherent biases, which makes any data derived speculation more reliable and the statement highly responsible.

In contrary to what was propagated, India has not really outperformed other countries in the battle for curbing COVID-19 but in reality, India underperformed among countries of the middle income class.

Countries like Belgium and Iran, both of high income and middle income class respectively had higher numbers than India at the initial phase and instead of being more vulnerable, they contained the spread more efficiently. This has put a question mark on the Union government’s strategies.