Mt Everest: Overcrowding at the top of the world must be regulated

A New York Times article dated March 18, 1923 was titled Climbing Mount Everest is work for Supermen. In the piece, British mountaineer George Mallory was asked to explain why he wanted to climb the Everest. Mallory, by then a veteran of two failed Everest expeditions, responded defiantly: “Because it’s there”. Malory would subsequently die in his third attempt.

Mountaineering had always been an exclusive activity, accessible only to a few who had the specialised skills, the endurance and the motivation to go the distance. It required years of experience and gruelling practice in the most hostile of circumstances to prepare oneself for the mammoth task. This has changed significantly.

The generation that seeks instant gratification has gradually woken up to the immense possibility of commercial mountaineering. The potentially fatal mix of high disposable income, unscrupulous and poorly judged personal ambitions and lack of preparatory effort is paving the way for a queue of ego-tourists at the top of the world.

This increasing footfall of mountaineering enthusiasts is creating a host of problems while allowing the Sherpas, the invisible workhorses behind a Himalayan expedition’s success, to earn a better living for themselves.

So, it becomes necessary to understand the nuances of this phenomenon and look for means to regulate the flow of traffic through judicious use of regulatory instruments and a conscious effort by all stakeholders to return Mt Everest its remoteness. 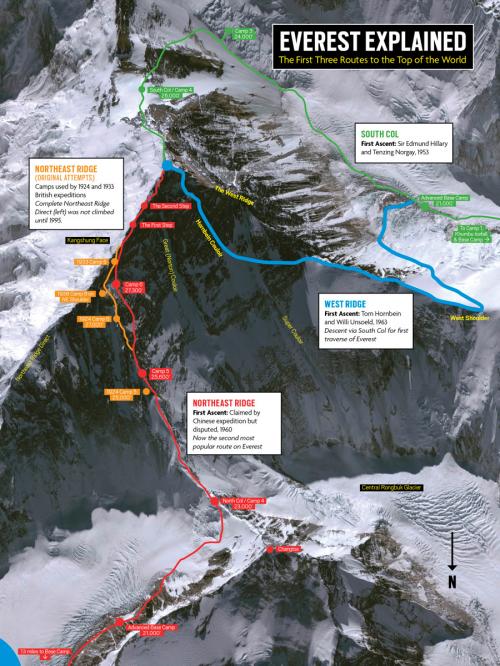 The domestication of Everest

The mountain was elusive to humankind for the most part of the 20th century. Since the first summiting in 1953, the subsequent decades witnessed only a trickle of trained professional mountaineers scaling the peak.

Climbing the Everest was a bigger and richer challenge than today as the unknowns were larger, margins were slimmer and the peak called for greater personal effort. 1980 was a watershed year when recreational mountaineering in the developed world took a concrete form with the popularisation of the 7-summit challenge.

Subsequently, following the Chinese example, the Nepalese government also started issuing more permits since the beginning of the 1990s and this had a compound effect on the industry as a whole.

The infrastructure and the allied services around these expeditions began formalising to meet a growing demand of enthusiasts. Fewer than 2,000 people had climbed the Everest in the 1980s, but more than 4,000 did in each of the following decades. 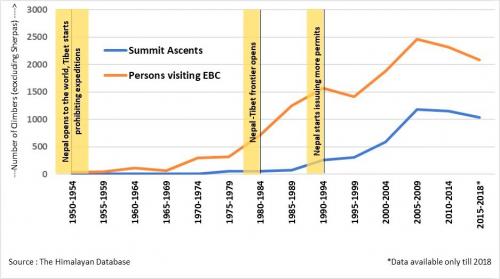 The commercialisation of these expeditions has meant that competition among the tour operators has increased, which in turn has paved the way for more economical expeditions targeted at the budget climbers.

Meanwhile, tasks like carrying equipment, setting up ropes and ladders along the routes and providing assistance of all kinds have passed onto the Sherpas. Despite the increasing ease to climb and an improved knowhow of the terrain, the mountain still imposes certain physical barriers that define its carrying capacity.

One such barrier is weather, which only allows a small window for potential summiteers to try their luck. It leads to a choked-up traffic of climbers at astounding heights of 8,000 metres and above. The wait is often long and climbers exhaust their supply of oxygen.

This creates a potentially fatal situation as an average human can only metabolise 30 per cent of the oxygen than the usual intake and metabolism at sea level.

Often, inexperienced climbers succumb to the fatigue, start hallucinating and ultimately die from exhaustion or fall. There is very little that can be done at such incredible heights to prevent such mishaps from occurring.

Noted writer and climber Mark Jenkins made a similar observation at a session of Nat Geo Live, where he called out the arrogance of the ill-trained climbers to not heed to their Sherpa’s advice and turn back, only to succumb to death from exhaustion. On May 22, 2019, as many as 220 climbers had attempted to reach the summit within a window that was as small as just two days — May 21-23.

As a result, there was a situational bottleneck with a serpentine queue waiting for hours to reach the summit and descend safely. As many as 11 climbers died in this process, making the spring of 2019 the deadliest season since 2015.

The Everest Base Camp (EBC) has also seen a surge in the amount of waste that gets generated every year at the start of a climbing season. The entire base camp is transformed into a mini town with tents of varying colours dotting the scene. This pristine and fragile environment is reeling under the pressure of garbage and human waste.

Every village that one passes through on their way to the EBC exhibits a landfill. Often, these landfills are located on the path of seasonal watercourses, creating a health hazard during the monsoonal months.

The human waste from the EBC is collected in closed plastic barrels and carried to a location and dumped inside a pit, which is again located on the way of a seasonal watercourse. Recently, the Nepalese government carried out an expedition to the Everest with sole purpose of collecting trash. Discarded plastic cans of oxygen, plastic wrappers of energy bars and other food items, alcohol bottles, discarded climbing gears and human excrement were some of the items that were collected during the two-month long exercise.

With the footfall of tourists stated to increase at the Sagarmatha National Park along with a growing number of aspiring Everest summiteers, it becomes imperative to critically appraise the regulations that govern these expeditions.

The two most popular routes to the Everest are along the Southeast Ridge (Nepal) and Northeast Ridge (Tibet). While the traffic of climbers through the Southeast Ridge has traditionally been higher, things are changing rapidly as many expedition companies are shifting their operations to Tibet owing to poor regulations and overcrowding on the south side.

This is partly reflective of the fact that expedition organisers prefer the route from Tibet than the one in Nepal. The growing understanding is that the chances of conducting a safe expedition are greater on the northern side than the southern one where the presence of situational bottleneck impedes progress.

A nuanced consideration of the rules and regulations that are operational in the Tibetan flank and the proactive steps taken by the government in enforcing these rules, provide a ready explainer.

These have been instrumental in keeping the traffic of climbers on the north-eastern ridge uncongested and relatively less polluted.

Here’s a comparison of laws that govern the expeditions from the two countries — China and Nepal. This clearly indicates that China is a frontrunner in the creation of strong regulatory instruments.

Nepal just doesn’t have weak regulations but it also lags behind in implementation of such regulations. For example, while it is mandatory for each climber to fetch 8 kgs of garbage or the mandatory deposit of $4,000 for garbage management would be forfeited, the law enforcement is extremely weak.

Moreover, the Everest permits in Nepal are issued by the tourism department and therefore it is reluctant to curb the footfall as it fears harming the industry that spins money for the tiny, poverty-stricken Himalayan state. This is also reflected in the lack of regulatory means to control the companies that run the expeditions in Nepal.

Budget groups that conduct these expeditions in Nepal thrive on the lack of stringent standards and target the enthusiastic but ignorant group of tourists for a glorious moment of fame that often turns into flak.

Nepal benefits immensely by controlling the southeast route to the Everest summit. The annual revenue that is collected by the government amounts to Rs 27 crore ($ 3.33 million) through the allocation of Everest permits alone.

This represents more than 75 per cent of the total revenue that is generated through permits for all the peaks in Nepal. These figures clearly indicate that Mt Everest is the main drawer of tourists and it supports an elaborate industry that is built around the enchantment of Everest.

The Khumbu region of Nepal that acts as a gateway to the Everest has benefited immensely from the traffic of visitors who come to hike and experience the surreal landscape. This has generated employment and cash flow and has improved the economic wellbeing of the region.

Traditionally, climbers from the United States, United Kingdom and Japan have dominated Everest expeditions. However, this has changed in recent years and there is a growing increase in the number of expeditioners from Asia, mainly Indians and Chinese, along with the Russians.

This is evident in the following graph which shows that the percentage share of expeditioners to the Everest from China and India have started growing since the lustrum —1994 to 1998.

This is in contrast to the percentage share of climbers from the US and UK, which shows a decreasing trend since the lustrums — 2004-2008 and 2009-2013. Some observers attribute this trend to the growing middle class in India and China and link it to the rise of budget expedition firms. Irrespective of the validity of these claims, what appears to be a certainty is the fact that the footfall will continue to increase. 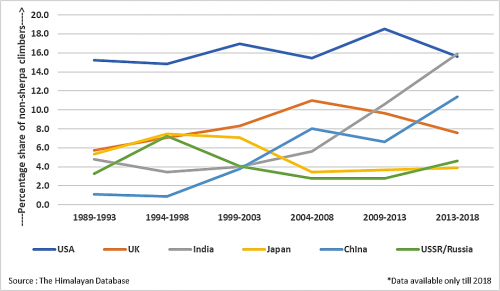 The road ahead is both challenging and promising. Nepal needs to be proactive in safeguarding a tourism industry that is centred around Mount Everest. Stringent rules and strong law enforcement need to be at the core of a regulatory framework that would govern the expeditions to the summit.

The architecture of such a framework needs to accommodate all the different units and be present at different levels from the expedition organisers and the teams to the individuals. While the number of tourists flocking the EBC will continue to grow, the permits to climb the summit can be restricted to only those who are adequately trained and experienced to undertake such an expedition.

The Department of Tourism needs to adopt sustainability, not as an option but as a necessary ingredient in all its planning and implementation. The sanctity of the mountain and the position that it holds should invoke a hard and decisive response from the government, supplemented by a concerted effort of all concerned stakeholders.