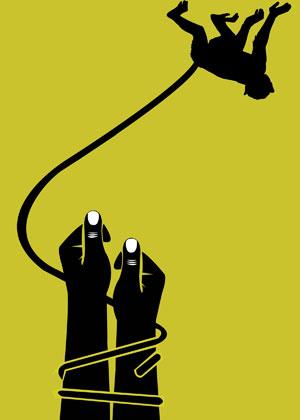 It is time we redefined what we mean by conservation and what constitutes gender issues. I am in Almora, where a group of anguished women are telling me how their already hard life has become harsher because of marauding monkeys and wild boar. Their stories are heart-rending. One woman tells me how her young daughter was attacked. Another one talks of how she was mauled. She shows me her scars. All talk about how their crops are being devastated. “We get one-third (yield) or even less now.” Nothing is left, another says. “We can’t sleep at night … wild boars plunder our crops.”

This comes after back-breaking work to get the food. In the Himalayas, women (there are no men to speak of in agriculture in this region) collect large loads of green fodder, carry them on their back up and down precipitous slopes, all to feed the livestock, not for milk but for manure. The steep mountain terraces are poor in fertility and this is the only way to improve productivity. Now even this is threatened.

Their pain is palpable. Their livelihood is being destroyed. One woman tells me with obvious contempt: “The government says it will give us grain under the Food Security Act. We tell them, ‘Keep it. Your grain is substandard and poor in nutrition. Protect our land and we will give you double the grain.’ Our mandua is nutritious and healthy.”

I ask them why they are raising this issue now. After all, they have always lived in this forested region where animal attacks are common. The older women reply, quickly and strenuously, “We have never seen anything like this. The numbers have multiplied many times.” I then say that this is clearly because we have destroyed habitats of monkeys and other wild animals. Forests are being destroyed and so animals are turning to human settlements to find food. It is our fault, I say. “We have not encroached on the forests. It is the city that has grown and taken over forest habitats,” they point out. What surprises me is the next response: “These are not our monkeys. These are aggressive and violent.” I probe more. The forest department, it seems, was bringing drugged monkeys from other places and leaving them in the forested villages. All this was being done at night and people had no information.

This does not surprise me. Even in Delhi where the rich and famous live, when monkeys became a big menace they were “relocated” to forested regions on the outskirts of the city. Now people like me can be wildlife enthusiasts without having to deal with animals in their backyard. But it does make me realise just how callous (indeed criminal) our conservation policies are.

I summon courage to ask what they want. After all, monkeys are worshipped as descendants of Hanuman. Will they allow killing? First there is silence. I can feel the tension. Then one woman bursts out, “Yes. These monkeys are not Hanuman but Bali—the evil one.” The rest join in. “We want government to act.” This would mean that the Uttarakhand government would have to declare monkey vermin and then undertake culling.

Currently, governments struggling to deal with the menace are relocating and sterilising monkeys. This measure is clearly failing. Sterilisation requires capturing the animal and holding it for three days before sterilising and freeing it. The programme is designed to fail. There are too many animals, capturing is difficult and it is impossible to know which animal has been sterilised. Worse, there is no clear idea of the optimum number that needs to be sterilised, so breeding continues. Primatologists say at least one-third of the population needs to be sterilised to stabilise (not reduce) growth. This is impossible to achieve.

What then is the solution? It is difficult to say. The Uttarakhand government has recently declared wild boar vermin, but who will kill the animal? In neighbouring Himachal Pradesh, the monkey has been included in the category. But where are the guns? The forest department is least bothered to help villagers. These villages are run by women; the men have migrated or are looking for jobs outside agriculture. In one case, the women described how they ganged up and took out sticks to beat the animal that was marauding their field. “It turned on us and we had to take cover.”

The problem is urgent, real and causing huge damage and pain. It cannot be shrugged off. It needs resolution.

This is where it gets complicated. One, the issue concerns largely women. But who will take up this “gender” issue? It is women who farm the mountain slopes. We have no time for them. Two, the issue concerns how we practise conservation. We want the pleasure of seeing animals in the wild, but without paying the real price of that protection. This is not acceptable. Should not be.