Irrespective of being left or right in orientation, the next elections will be about rural issues 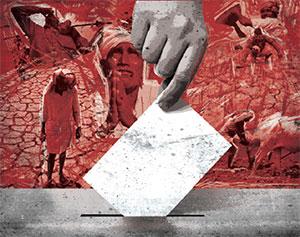 Electioneering has come to an end in Karnataka, though with many twists and turns. With this election, countdown for the next general elections in May 2019 has started. In the next 11 months or so, there would be a few state assembly elections, each of them adding to the restlessness over the political fate of both the ruling parties and the Opposition at the Centre.

There are many political permutations and combinations that will decide the electoral results. But, one can say with a fair level of confidence that the next elections would be fought more over delivery of development in rural areas than any other issue. Specifically, the agrarian crisis will emerge as the biggest issue. Why?

First, a new phase of rural distress is brewing just like the monsoon somewhere deep inside the Arabian Sea. Since February (as the cover story in this edition finds out), erratic rains and unseasonal weather events have battered farmers, who were anyway under huge debt due to drastic low return from their earlier crops. In such a situation, farmers are desperately waiting for a normal monsoon not only in terms of arrival and overall quantum, but as something that delivers rains according to the crop cycle needs. Indications are already strong that the monsoon would be erratic in its spread. This means a great threat of crop failure hovers over India. In case this scenario comes true, there would be widespread farmers’ unrests, particularly in states like Rajasthan and Madhya Pradesh, which are going to polls by this year end. Governments have to focus majorly on delivering the right packages to farmers. The focus of the governments would be completely on the agriculture sector that has suffered much in recent years.

Second, food inflation is picking up, partly due to the rise in fuel price and partly due to crop loss in the last three months. Let’s talk about food inflation. After three months of stagnation, retail inflation picked up in April due to fuel and food price rise. Going by recent experiences, the government is unusually sensitive to food inflation due to the influential middle class. And invariably, government imports food produces to deflate the price. But this means the domestic produces also lose price incentives, leading to less return for farmers. This further adds on to the woes of farmers. In Madhya Pradesh, onion and garlic farmers are already out on the streets due to very low procurement prices for their produces. Similar situations will be widespread in the near future. This will surely push the government to focus more on ensuring the right price to farmers.

Third, India’s chief finance minister—the monsoon—is again turning out to be uncertain. Though the India Meteorological Department has predicted a normal monsoon, there are already speculations over its spread and spatial distribution. The long pre-monsoon erratic weather events have raised a question over the fate of the monsoon. What if the monsoon doesn’t shower according to its normal pattern? This will be the toughest situation for any government in an election year. Again, in this situation also, governments have to scramble to rescue farmers with relief measures, however misplaced.

All the three scenarios above must be analysed in the context that farmers are a distressed lot. A normal monsoon will not just wipe out their debts and distress. They are enduring an unfair market that the government has created. In an election year, no party can afford to ignore this deadly legacy. So, at least the electioneering will be around rural issues, and particularly around agriculture.