The media and the republic 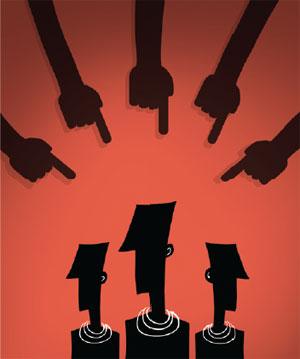 On June 17, the  Hindustan Times carried a story with an evocative headline: “Death stalks ‘outsiders’ in Jharkhand tribal villages”. The story is all about how many tribal villages are putting out notices at entry points, debarring “outsiders” from entering inside. ‘“How dare you enter the village without seeking permission from the gram sabha (village committee)? Didn’t you read the instructions clearly,’ retorted an angry young man, Mogo Munda, pointing towards the plaque placed,” a paragraph from the story read, enacting a conversation between a local resident and the writer of the story. It gives a message of some kind of collapse of Indian sovereignty and tries to analyse the development in the context of recent lynching of few outsiders as “child lifters”.

Before this journalist, many people had similar experiences, including a former governor of Maharashtra who was asked by a tribal village to seek permission from the gram sabha before entering its geographical boundary. And this is not the first time that tribal villages have put out such notices. There are hundreds of such villages in India that have declared themselves as “republics”. This is not to challenge Indian sovereignty but to assert the right to self-governance. The fifth and sixth schedules of the Indian Constitution give tribal communities the right to self-governance. If these provisions are strictly adhered to, these villages would be behaving like powerful republics. And this is central to tribal society and economy. The Hindustan Times story is, thus, a misinformed piece of reportage.

These village republics are a legacy of India’s glorious past of village self-governance that Mahatma Gandhi propagated as models of governance. Let me remind you of an observation made during a session of the Constituent Assembly on January 20, 1947.

S Radhakrishnan, while asking for a governance system based on existing village republics, narrated an incident: “When a few merchants from the north went down to the south, one of the princes of the Deccan asked the question: ‘Who is your king?’ The answer was, ‘Some of us are governed by assemblies, some of us by kings.’”

So strong were these republics that the British Empire tried to exclude them from their dominion, after years of effort to control them. “The village communities are little republics, having everything that they can want within themselves, and almost independent of any foreign relations. They seem to last where nothing else lasts,” wrote Charles Metcalfe to the Select Committee of the House of Commons in 1832.

Probably threatened by Metcalfe’s assessment and the humiliation of the 1857 mutiny, the village republics were subjected to systematic dosages of government control till they lost relevance. First, they weakened the institution by taking over villages’ traditional administrative and legal powers. Even then they could not wipe out the traditional institutions. They failed because they had to fight the whole society in each and every village. Ultimately, they withdrew from some tribal areas and called them excluded areas. Later, the Indian Constitution codified these republics and their rights. The village, which the Hindustan Times mentioned, is one of them.

Reading the story in a national daily is like a reflection of contemporary ignorance of history of natural resources and how it dictated governance models that did justice to locals. Tribal villages continue to be treated like centres of resource procurement to fuel our economy, just like the colonial times. Conflicts over resources in tribal areas are symptomatic of the same exploitative rule prevailing even today.  But hundreds of villages sticking to their age-old governance models is a sign that there is hope for ending the continuing British legacy. It is in no way a “nuisance” as the article quoted a police officer. Rather, these villages should be celebrated as right holders of the Indian republic’s impressive constitution.