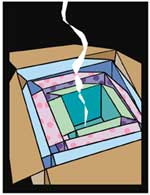 if it were not bad enough that farmers have to take their lives before the government sits up and takes notice that something is seriously wrong, we now have a cruel farce on our hands. Prime minister Manmohan Singh went to Maharashtra's Vidarbha district where heavily indebted cotton farmers have been committing suicide in large numbers from last year. After the trip, the government announced a package that gives an entirely new meaning to the idea of a dud cheque on a crashing bank.

What Singh offered was a waiver on interests on bank loans and a rescheduling of loan repayments. Obviously, his advisors did not do their homework, even after the experience of Andhra Pradesh. Before Vidarbha, Andhra had seen a spate of suicides in 2003-2004. It had then become evident that farmers were committing suicide because farming was not profitable -- high input prices were triggering off a vicious spiral of indebtedness that was the cause of the crisis.

In Vidarbha, too, the problem is that cotton farming is not profitable for a large number of reasons. Input prices are part of it -- the high cost of irrigation coupled with the lack of water is one of the main problems. Singh's package does try to address the latter by sanctioning funds for completing a large number of irrigation programmes, but there is no certitude that the price question will be solved. But even more important than these issues, local people say, is the matter of the minimum support price (msp). Last year, the Maharashtra government had withdrawn a special price it used to pay which was well above the national average. This premium had considerably helped Vidarbha's cotton farmers to stay afloat. The new msp is considerably lower than production costs.

Unfortunately, instead of focusing on the question of profitability of farming, the government has announced a loan package. Some part of it is alleviatory, but others are dangerous because they will perpetuate the debt trap that the farmers find themselves in. New bank loans will find their way into the pockets of moneylenders to whom farmers are heavily indebted. And, of course, soon enough, the spiral of indebtedness and suicides will resume.