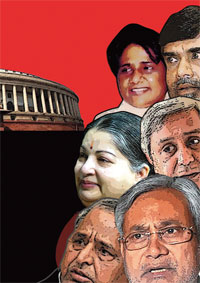 Regional political parties are India’s new electoral box offices. Analysts speculate they will be the key to government formation after the next general elections, so the two competing national parties—the Congress and the Bharatiya Janata Party (BJP)—are cracking tough political equations to win over as many of them as possible. There are valid reasons for this. Since 1984 not a single national party has formed government on its own. The 1980s and ’90s witnessed the electoral boom of regional political parties. Regional parties have been expanding both in number as well as in vote share.

The rise of regional parties was sharp in the late 1980s and ’90s when the country saw acute polarisation of voters in terms of socio-economic groups. During this period voters from the disadvantaged sections took greater part in voting. Many regional parties used this to carve out their political identity. They promised development and social and economic equity in face of economic liberalisation. Regional disparity was stark and livelihood crisis was severe at that point of time. So regional parties did emerge using developmental aspirations of millions of people.

More recently, regional parties have flagged off the issue of federalism prominently in the face of an overarching Central government. Political analysts call their emergence democratisation of politics, where the focus shifted from national parties to local ones, allowing local issues to be reflected in national agenda. This also created many regional leaders for the country that had got used to a couple of top leaders from national parties leading and giving identity to the country. One would assume, the political direction was right.

However, the change in political landscape notwithstanding, the regional parties don’t have much to show in terms of redefining developmental policies that reflect regional aspirations. Whether it is relatively developed Tamil Nadu that elects regional parties for a long period or Odisha, India’s poorest state with a regional party in power for more than a decade, they do not have different economic policies to boast. Rather, there is a rush to adopt economic liberalisation, a national economic policy initiated by the Congress and supported by the other national party, the BJP.

Take, for example, Chandrababu Naidu of the Telugu Desam Party, a key player in Andhra Pradesh. He could not evolve an alternative land and agricultural policy to fix regional disparity. It is the same with Odisha Chief Minister Navin Patnaik representing the Biju Janata Dal. Under his leadership there has not been much change in the lives of the poor. His aggressive industrialisation has led to further precipitation of regional disparity and livelihood crisis. Bihar’s ruling regional party is no different. Chief Minister Nitish Kumar has been courting investments and high GDP growth. Except sporadic land distribution programmes for the poor, there is no concrete step in the direction of fulfilling regional aspirations.

It may be too early to rate regional parties’ development performance. But it has been long enough to gauge a trend. And the trend is that regional parties are divorcing themselves from their assumed mandate of fulfilling local aspirations.