He had a dream and a copyright 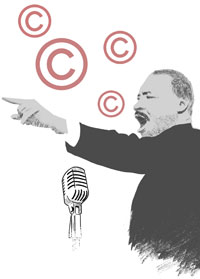 Narendra modi or, perhaps, his advisers choose gifts for heads of state with some thought. When the prime minister went to Washington in September for bilateral talks with Barack Obama, he gave the US president memorabilia related to Black rights leader Martin Luther King Jr. This included a recording of King’s address to our nation during his momentous month-long 1959 visit to India and a photograph of him at Rajghat where he went to pay homage to his guiding light Mahatma Gandhi.

So King has been very much on my mind in recent weeks. A little digging revealed that the All India Radio (AIR) recording was discovered in 2009 by researchers looking for material to mark the 50th anniversary of the civil rights leader’s visit to India. But it has been impossible to find the full recording of the speech on the Web although I am told that the Indian embassy in Washington has it and so does AIR. Both websites are not user-friendly and the search function threw up no results. However, one can listen to snippets on the website of NPR, the US public broadcaster.

There is not much global interest, perhaps, in this address. What the world listens to is what it knows well—the epochal “I have a dream” speech that King made in 1963, four years before he was assassinated. It’s a stirring speech and the soul of what the pastor and Black rights champion expected to achieve for his people. But sadly, the public speech made 51 years ago cannot still be used freely.

It’s privately owned by the family and under strict copyright. Delivered on August 28, 1963, the speech will come into the public domain only in 2038, a full 70 years after King’s death.

The weird part is that this much-quoted speech, text, video and recording, is out there on the Web. However, any commercial enterprise, and this includes newspapers and TV stations, has to fork out a huge fee to the family estate that owns the rights. Those who use it without permission, such as documentary makers, USA Today and CBS have been taken to court for copyright infringement. Weirder still, the family firm has handed over the management of King’s images and works to British recording company EMI Publishing. Top flight companies such as Mercedes-Benz and Alcatel have been licensed to use the speech in their TV commercials, clearly because they could afford the fee.

The question is how a public speech by such an important activist became private property. After all, thousands of people had heard King speak at the Lincoln Memorial, the speech had been televised live and the man himself had distributed printed copies to the media which had published it. What happened is that King had, a month or so later, registered his copyright to the text when he found some companies were profiting from selling unauthorised copies.

When CBS challenged the estate saying that speech had been made before King had a copyright, the broadcaster won the case in a lower court. But judges in an appeals court ruled—and this is the weirdest part—that King’s delivery of the speech was a “performance” and did not constitute a “general publication”! It also held that the copies given to the media amounted to limited distribution. CBS settled out of court. USA Today paid the estate $10,000 in lawyers’ and court costs along with a $1,700 licensing fee for publishing the full speech.

I was left wondering whether Jawaharlal Nehru’s more stirring (at least, for Indians) “Tryst with destiny” speech was a performance or a “general distribution”. Thank heavens, our copyright laws are not completely aligned with those of the US.