Pfizer to sell its medicines at no profit in world’s poorest countries, and other big names to make cancer drugs more accessible 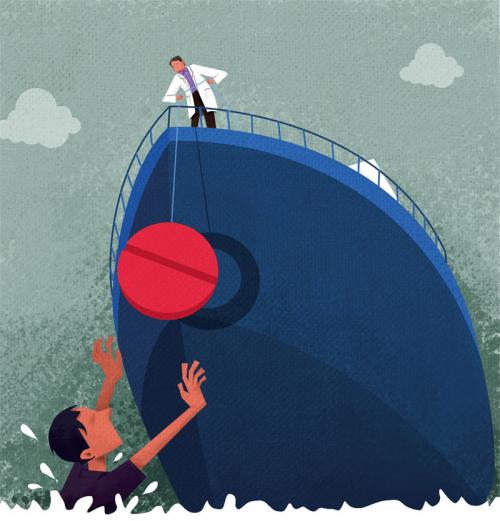 May could be considered the month of penitence. It was the month that Big Pharma appear to have discovered its conscience if, indeed, that’s what it was.

Two initiatives were announced to address the health needs of the world’s poorest countries: One by Pfizer at the World Economic Forum in Davos; and another by a group of other large pharma companies, which joined hands with global health organisations at a side-event of the World Health Assembly in Geneva.

Both are aimed at improving global health equity.

Pfizer, by far the world’s top revenue earner thanks to its covid-19 vaccine Comirnaty, launched an extensive “Accord for a Healthier World” project.

The US drug giant promises to provide all of its patented, high-quality medicines and vaccines available in the US and the European Union on a not-for-profit basis to people in 45 lower-income countries.

The company “seeks to greatly reduce the health inequities that exist between many lower-income countries and the rest of the world”.

Comirnaty, described as the fastest-selling drug in pharma history, contributed the bulk of Pfizer’s sales of $72 billion (nearly Rs 5.6 lakh crore) last year, and a reason why it has faced constant flak from the public health groups.

They say the company has not done enough to help poor countries during the worst of the pandemic and provide access to lifesaving medicines.

Did the worldwide censure, despite the honours and market accolades the company has earned for developing Comirnaty in a short span, prompt Pfizer to come up with this seemingly generous project?

Perhaps, it did; beyond the market is a company reputation and that has been undeniably dented.

The deal it is offering is pretty impressive including as it does 23 medicines and vaccines for infectious disease, certain types of cancer, and rare and inflammatory diseases, along with future products. Significantly, Paxlovid, Pfizer’s oral antiviral treatment for covid-19 is included.

According to the World Health Organization, Pax¬lovid is “the best therapeutic choice for high-risk patients to date” but has found it is inaccessible in poor nations. It will come in handy for countries which are still seeing a surge in covid-19 cases.

Pfizer estimates its initiative could benefit 1.2 billion people in 27 low-income and 18 lower-middle-income countries in Africa and Asia. A company official says it is “the most comprehensive offering that we know of that has been made for medicines across multiple therapeutic areas”. Rwanda, Ghana, Malawi, Senegal, and Uganda are the first lot of countries covered by the deal, Pfizer said.

For countries hobbled by resource and infrastructure constraints, the big plus point of Pfizer’s “Accord for a Healthier World” project is that supply of medicines will go hand-in-hand with improvements in diagnostics capacity and distri-bution infrastructure, such as storage, to improve access along with technical assistance to train health workers.

It expects beneficiary countries to expedite regulatory processes for entry of the new medicines since many of Pfizer’s 23 drugs and vaccines are not registered in lower-income countries.

But this raises a troubling question. What does this registration entail for low-income countries? Currently, the UN lists 46 as least-developed countries (LDC), 35 of which have become World Trade Organization (WTO) members.

In any case, the LDCS are exempt from WTO's multilateral agreement on Trade-Related Aspects of Intellectual Property Rights and do not have to enforce patents, according to WTO rules. This is why a company in Bangladesh is already producing a generic version of Paxlovid.

If Pfizer provides these countries with the listed drugs, it would discourage generics manufacturers from starting operations there in the long term. One of the important lessons of the pandemic is that countries should look for sustainable, multi-source procurement and diversified manufacture to overcome supply chain issues.

A single source supply of critical medicines can undermine a nation’s health security. That’s why humanitarian organisation Médecins Sans Frontières is wary of relying on “what’s effectively a charitable gesture on the part of the private sector to ensure that people have access to essential, life-saving medical tools.”

Other public health campaigners are more critical. People’s Vaccine Alliance, which has been a trenchant critic of Pfizer and other big vaccine developers, dismisses it as an image-building exercise that is “too little, too late”.

Julia Kosgei, policy adviser to the Alliance, was acerbic in a press statement. “After prioritising selling higher priced doses to rich countries throughout the pandemic while millions died without access to covid-19 vaccines and treatments, Albert Bourla seems keen to improve Pfizer’s reputation. But taking half-measures on equity won’t cut it.”

It is a harsh dismissal but the concerns appear to be valid. With Pfizer acting as gatekeeper, deciding who can and cannot manufacture its products, it leaves out many lower-middle and middle-income countries which will “pay through the nose” for lifesaving drugs.

The overarching worry for all those who have been campaigning for close to 20 months for a waiver of the WTO’s restrictive agreement on intel¬lectual property rights is that the Pfizer initiative is aimed at swinging the vote against this proposal.

The WTO ministerial in mid-June is expected to decide on the temporary waiver which would allow the 164-member countries to manufacture patent¬ed therapies, vaccines and health equipment with¬out fear of being penalised. Bourla has campaigned aggressively against the waiver.

What of the other initiative? Called ATOM (Access to Oncology Medicines) it has been launched by the Union for International Cancer Control (UICC) and multiple partners from civil society organisations as well as the public and private sectors with expertise in implementing cancer-focused access programmes.

The big cancer drug makers who have come on board so far are AstraZeneca, BeiGene, Bristol Myers Squibb, Gilead Sciences, Novartis, Roche, Sanofi and Teva. The focus is on medicines currently on the WHO Essential Medicines List to treat cancers with the highest incidence-to-mortality, such as lung, colorectal, breast, cervical, prostate and childhood cancers, in low-income and lower-middle income countries.

UICC is a hoary institution with a wide global network and works collaboratively which means it could be more effective in increasing the availability and affordability of cancer medicines which is ATOM’s primary goal. It plans to do this with an eclectic approach — supporting generic, biosimilar and originator manufacturers to develop and supply quality medicines at affordable prices. It will even facilitate the use of voluntary licences in ATOM countries. Do we hear a rumble of protests from the usual suspects?