Schools, as institutions for people in their formative years, are strategic settings for advancing health promotion skills, practices and community links 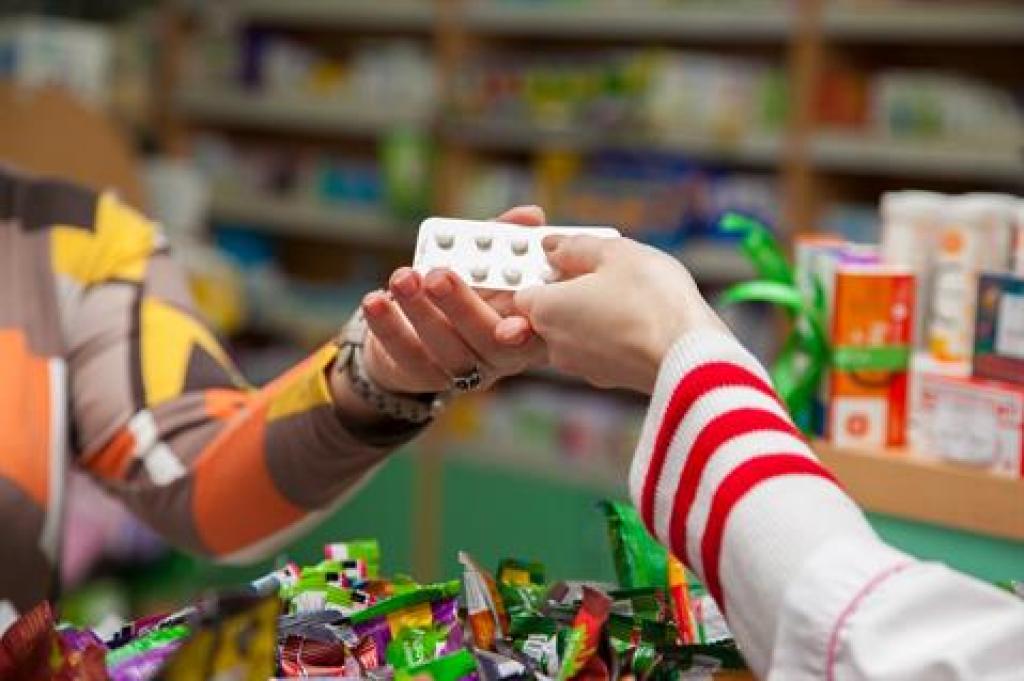 Antibiotics are important life-saving medicines and their inappropriate use is a major driver for antimicrobial resistance (AMR). Emerging antibiotic resistance is an important global public health challenge, which is threatening our ability to treat infectious diseases.

About 80 per cent of antibiotics used in the community are either prescribed by healthcare providers or purchased directly over the counter by consumers / caregivers without prescription for trivial illnesses.

Approximately half of community use of antibiotics is inappropriate (unnecessary use, inadequate dosage and combination therapy) and adds to the already existing burden of antibiotic resistance.

Tackling the global spread of AMR is both a priority and a challenge for the World Health Organization (WHO). India developed the National Action Plan on combating AMR (NAP-AMR) in 2017 — based on the Global Action Plan on AMR — as a national priority for the same.

Among six strategic priorities, the first was to improve awareness and understanding of AMR through effective communication, education and training.

This strategy envisioned that educating prescribers and raising awareness among consumers had immense potential for behaviour modification with subsequent reduction in misuse of antibiotics.

Schools, as institutions for people in their formative years, are strategic settings for advancing health promotion skills, practices and community links. Raising awareness about judicious use of antibiotics, hazards of antimicrobial resistance and promoting behavioral change through school children is critical to tackle this issue.

Engaging school students can promote a better understanding and awareness about the problem from an early age. Children strongly influence parental behavior as well as that of their family and community. When children step into the role of the educator, they are inspired to solve problems such as self-medication, sharing and using left over antibiotics, etc.

Aligned with WAAW theme for 2019, a school health campaign was organised by Delhi Society for Rational Use of Drugs (DSPRUD) in collaboration with WHO, National Centre for Disease Control and Government of Delhi with the objective to raise awareness among school children about antibiotics and antimicrobial resistance.

Only 1,041 government schools were targeted for the campaign. All SHS staff members were trained as master trainers by experienced faculty. The training schedule and contents comprising presentations and quiz was developed in joint consultation with SHS staff. 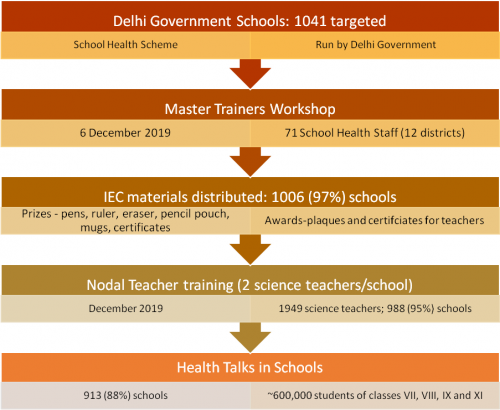 Information, education and communication (IEC) resources, power point presentations, key messages and quiz were based on 2020’s theme of WAAW, focusing on the problem of antibiotic misuse and common practices that promote development of resistance to antibiotics and spread of infection.

Multiple pedagogical, participatory and physical techniques such as display of posters, standees, health talks, quiz, prize articles inscribed with messages, certificates for the students and the teacher, plaque for the school principal to acknowledge their active participation etc., were used for dissemination of messages.

To utilise the power of social media, a WhatsApp group of the SHS team was also employed for coordination and resource sharing. To understand the usefulness of the campaign, school teachers were asked to respond to a questionnaire about the contents of the messages, IEC materials. This kindled an interest among students.

At least 71 SHS staff members were trained to be master trainers. Information education and communication material was distributed in 1,006 schools (97 per cent).

Master trainers trained two nodal teachers per school in 30 training sessions; a total of 1,949 science teachers were trained from 988 schools (accounting for 95 per cent coverage).

These nodal teachers organised quiz and health talks in their respective schools over a period of 30 days. A total of 913 Delhi government schools with approximately six lakh students between 12 and 17 years were part of the campaign.

The engagement was ensured through prizes distribution to around 30,000 students.

The commitment of schools and teachers were acknowledged by distributing certificates (of antibiotic champion and antibiotic guardian) and plaques to all nodal teachers and school principals respectively. 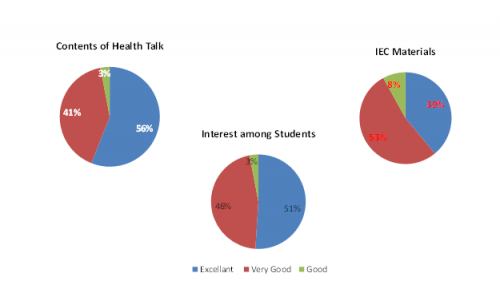 The feedback for future campaigns

The topic of the campaign was well-appreciated. There were, however, suggestions to hold these sessions regularly and for a longer duration.  Further to increase the reach, health talks could be held on days when parents are also present (sports day or annual days).

They also suggested that rewards / prizes be given to as many students and teachers as possible for broader engagement and greater motivation.

This campaign not only targeted school students but also educated, motivated and empowered large number of science teachers about judicious use of antibiotics and need to save antibiotics for future. The short duration of campaign proved to be a useful strategy in keeping the enthusiasm of teachers high with wide dissemination of messages.

The clear, precise, relevant, high impact messages for appropriate antibiotic use may serve as a powerful tool to boost explicit memory among students. School-based health education about antibiotics has immense potential for greater involvement as through right education students can help build up a better society by helping their parents, family and community about optimum use of antibiotics.

It is well known that informed, empowered patients and caregivers can lead to safer patient care with possibility of reducing self medication with antibiotics.

“There is only one way under high heaven to get anybody to do anything. And that is by making the other person want to do it” – Dale Carnegie