COVID-19: Role of nutrition gardens in ensuring nutrition for children 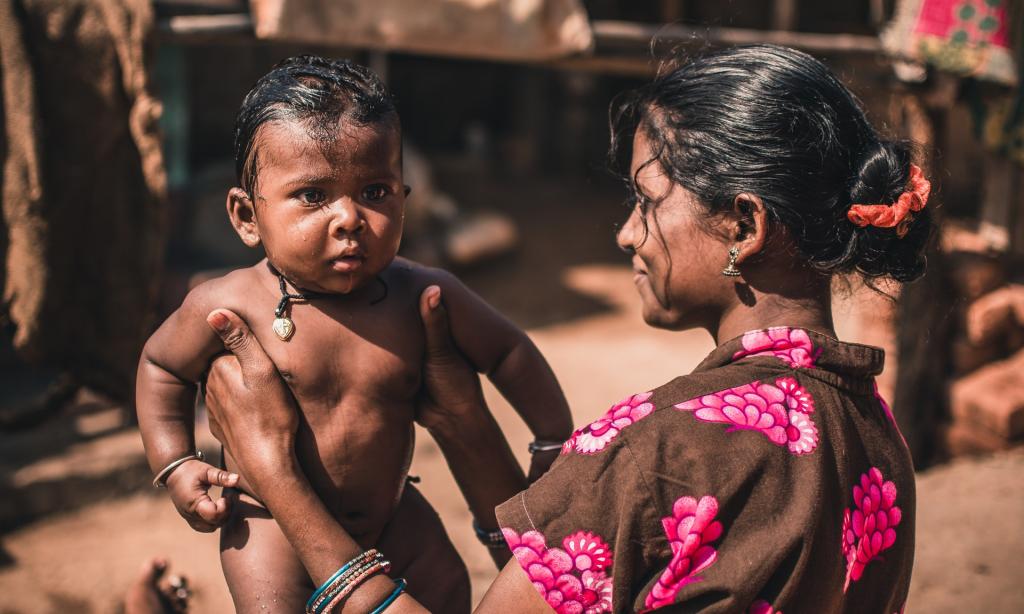 The number of novel coronavirus disease (COVID-19) cases in children up to 14 years of age in Odisha were more than five per cent of the cases as of July 28, 2020, with stark regional variations across districts.

The fight against the COVID-19 pandemic will continue for several more months, with a huge burden on the public healthcare system, including in child nutrition and development aspects.

The nutrition risk and healthcare vulnerability of children widened to an unprecedented scale during the pandemic. Nutritionally, an adequate diet is necessary for optimal growth, health and the physical and mental development of children.

Inadequate nutrition and accessibility can result in undernutrition, especially stunting and micronutrient deficiencies leading to infant and child morbidity and mortality.

Nutritious complementary foods like fruits and fresh vegetables, along with breastfeeding can reduce stunting among children. Stunting in early life is found to have long-term adverse effects on the health, physical growth, cognitive development, learning and earning potential of children.

Locally available fresh vegetables and fruits from the homestead or nutrition gardens are a major and affordable way of ensuring availability of healthy food, balanced diet, dietary diversity, nutrition and micronutrients.

Nutrition gardens tend to improve the household consumption of nutritious food, promote dietary diversity and increase the quantity of fruits and vegetables consumed in the household.

More than four (43 per cent) of every 10 children up to six years were under-nourished, with child malnutrition being a major concern, according to the latest World Bank estimates. 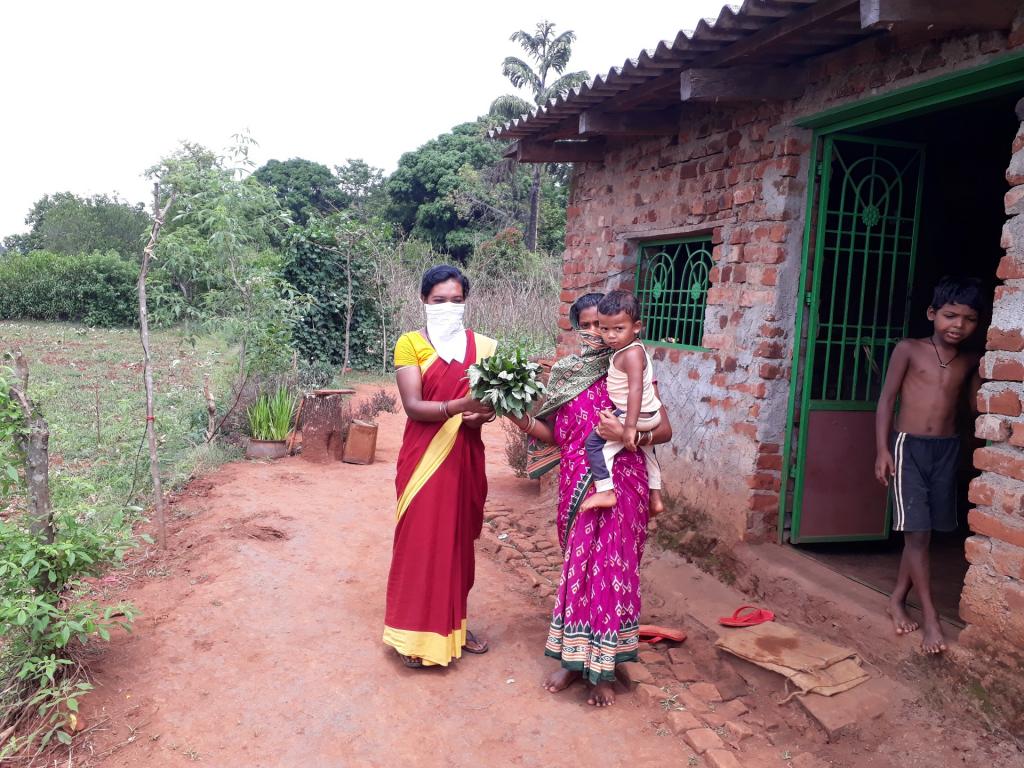 Globally, more than two-fifth (45 per cent) of all deaths in children under five years were linked to poor nutrition. Among the countries, India was second in the number of children suffering from malnutrition.

Odisha continued to be infamous for child malnutrition, despite significant progress in reducing child under-nutrition at a faster rate than the national average.

Regional, gender and ethnicity variation of stunting across districts of Odisha ranged as high as 47 per cent in Subarnapur to a low of 15.3 per cent in Cuttack. The prevalence of chronic under-nutrition is more severe among tribal communities where 57 per cent of children aged less than five years were stunted and 45 per cent were stunted.

A United Nations Children's Fund report also said 16 per cent of children suffered from acute malnutrition, with few having access to institutional care. The infant mortality rate in the tribal community was the fourth highest in Odisha, after Madhya Pradesh, Rajasthan and Chhattisgarh.

In fulfilling nutritional requirements of children, the state government implemented several programmes under the Integrated Child Development Services (ICDS) platform that plays a vital role in delivering benefits of schemes at the doorstep of target groups.

In view of this, non-profit CARE India Solutions for Sustainable Development (CISSD) Technical Assistance and Research for Indian Nutrition and Agriculture (TARINA) project initiated an effort by establishing nutrition gardens at anganwadi centres under ICDS at Phiringia block in Kandhamal district.

These gardens intend to complement the nutrition supplement of children aged between three and six years by making nutrient-rich fruits and vegetables available round the year.

This project is being implemented in two tribal-dominated districts in Odisha under a consortium led by the Tata Cornell Institute for Agriculture and Nutrition with financial support from the Bill Melinda Gates Foundation.

Kandhamal — in central Odisha, where a majority (54 per cent) of inhabitants are tribal — is the second-worst in human development indicators, out of the state’s 30 districts.

The vast hinterland, tropical terrain and forest ecosystems make life of the inhabitants more difficult in terms of accessing public health facilities and welfare provisions. In the district, 38.4 per cent of children under five years were found stunted. Wasting is prevalent among 23.1 per cent of children, while 43.1 per cent were underweight and 42.7 per cent anaemic.

Nutritional status of children (in per cent) 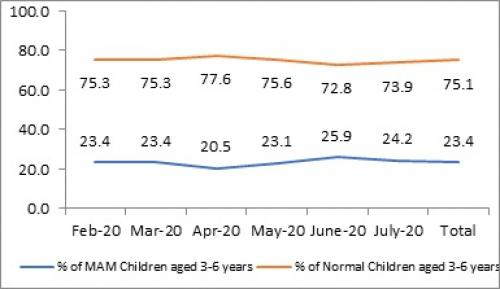 There are 2,102 anganwadi centers in Kandhamal catering to 80,000-odd children up to six years of age, with an average 40 children per centre. In Phiringia block, 220 centres were functional. Involving the community (Angaanwadi Janch Committee) with financial support from the project, 44 nutrition gardens were proposed to be established in 44 centres in Phiringia, based on a screening process.

This process included verifying availability of land, water source and protective fences. So far, despite COVID-19 restrictions, 10 gardens were completed.

Anganwadi centres were provided cooked food with fixed daily basis menus to pre-school children along with snacks to ensure their nutrition supplement, according to government instructions.

Lack of availability of quality vegetables in local markets, high price fluctuations of vegetables and fruits along with challenges in transportation, communication systems, etc posed genuine challenges for the fulfillment of the programme’s objectives.

Even if centres were able to arrange vegetables, it was difficult to maintain variety, freshness, quality and continuity.

In this backdrop, in-situ grown vegetables and fruits in the premises of anganwadi centres is supposed to ensure availability and variety, including freshness and quality. This initiative has the potential to address micro-nutrient deficiencies of children by enhancing their dietary diversity.

CARE India-TARINA’s nutrition gardens at anganwadi centres have begun to produce green leafy vegetables, including amaranthus, spinach, khosoala and coriander, along with seasonal vegetables like green beans and pumpkins as well. Fruits, including lemon, papaya and guava are grown too.

Around 100 kilogrammes of green vegetables, fruits were harvested and distributed at the doorsteps of enrolled children during the pandemic. This was because the centres stopped cooking food and children were not allowed to step out during the lockdowns.

Initial results of the intervention showed the number of moderately acute malnutrition children accounted for less than a quarter, despite complete shutdown of routine programmes.

This provided an iota of hope for more promising improvements in the nutrition levels of children in the intervention areas.

Odisha has experienced several disasters, including the COVID-19 pandemic. The government has been proactive in taking several preventive and protective measures to deal with the pandemic by introducing new initiatives and measures.

The pandemic, however, poses a significantly bigger challenge to the government, not only in terms of securing livelihoods of poor communities due to economic standstill because of the lockdown and shutdown, but also in ensuring the health and nutrition of inhabitants, particularly among children.

All health and child development frontline workers are pressed to discharge services exclusively in the battle with the COVID-19 pandemic for the past five months, with uncertainty over when it will end.

Optimum service delivery to the sub-section of the vulnerable population is at risk in the transitory absence of frontline platforms for health and child development.

A visionary call at the district administration level must be at the forefront to address the malnutrition problem of children. A clear roadmap needs to be developed, considering the local situation, instead of waiting for orders coming from the state or the Union government.

While the entire world’s health and economic sectors are suffering because of the downturn in fighting the pandemic, it is important that quick decisions are taken at local administrative levels. Adequate preparations at this level to protect children during the pandemic must be carried out.