The Centre has divided India’s districts in 3 zones amid the nationwide lockdown. Here, researchers from the International Institute for Population Sciences categorise them in 4 zones of severity and recommends the course of actions

The novel coronaviruas disease (COVID-19) has made social distancing the new normal. It has brought the world economies to their knees. No country, irrespective of its economic might, can afford a prolonged lockdown. But to lift restrictions on social movement at the expense of its citizen’s health could prove even more costly, including for India, which has around 23,000 active cases, 8,000 recovered and more than 1,000 deceased cases of COVID-19, according to the latest report published by the Union Ministry of Health and Family Welfare.

According to the data, published on the official Government of India website, Maharashtra has the highest number of cases in the country across the confirmed, active, recovered and deceased categories. Gujarat and Delhi have the second and third highest numbers of confirmed cases. No deaths have been recorded in the northeastern states of Tripura, Mizoram, Manipur and Arunachal Pradesh; the Union Territories of Puducherry, Ladakh, Goa, Chandigarh and Andaman and Nicobar along with Uttarakhand and Chhattisgarh have also not recorded deaths attributed to SARS-CoV-2.

However, all these Union Territories and States have low numbers of confirmed and active cases. Apart from Maharashtra, Gujarat, Delhi and Madhya Pradesh have the most active cases whilst the highest number of cured patients was recorded in Tamil Nadu, Delhi and Rajasthan. The best recovery rates came from Goa, Tripura, Manipur and Arunachal Pradesh at 100 per cent followed by Chhattisgarh at 89.4 per cent, Kerala at 73.8 per cent, Ladakh at 72.7 per cent, Assam at 71 per cent and Haryana at 67.4 per cent.

However, it would be wise to stay observant of trends in data due to the virus’ nature of spreading and the difficulties faced concerning its containment. Although India’s transmission is classified under the cluster of cases category by the World Health Organisation, it has the highest number of cases in the South-East Asia Region. As India enters into the last few days of the extended national lockdown, the pertinent questions that arise are whether or not to relax restrictions, how to relax them, to what extent and in which areas.

Thus, an important approach in answering the aforementioned questions is by categorising districts on basis of the cumulative number of cases and new cases that emerged in the last 15 days within its administrative boundaries in its neighbouring districts. Based on these four parametres all the districts can be categorized into nine types and four colour coded into green, yellow, orange and red zones, with each highlighting the relative risk of spread and susceptibility to the infection (see table below).

Distribution of COVID-19 cases by districts of India 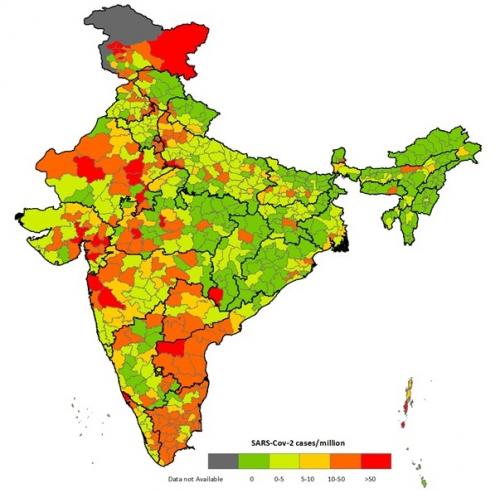 Based on the analysis, most of the districts, collectively fall under the orange and the red zones whilst only a handful are categorised under the green and yellow zones. Most districts under the green zone are concentrated in the North East with some situated in few or singular pockets in West Bengal, Bihar, Odisha, Chhattisgarh, Himachal Pradesh and Jharkhand.

Majority districts of the yellow zone are also concentrated in the North East while others are located in Uttarakhand, Uttar Pradesh, Bihar, Sikkim, West Bengal, Jharkhand, Odisha and Chhattisgarh. Most districts in the orange zone are concentrated in Central India. Others are located in Odisha, West Bengal and northeast India in prominent numbers whilst the rest are scattered across various states.

West and South India have the most number of districts falling under the red zone; Punjab, Haryana, Rajasthan, Gujarat, Maharashtra, Telangana, Andhra Pradesh, Tamil Nadu and Kerala have the highest number of districts severely affected by COVID-19. All districts of the newly constituted Union Territory of Ladakh and majority in the Union Territory of Jammu and Kashmir also come under the red zone. Other districts are spread over the length and breadth of India, compelling each one of them to grapple with COVID-19.

Cumulative and new cases within a district and neighbouring districts

They should, however, remain vigilant for casualties and simultaneously conduct random testing on a small scale. With most districts, that are either experiencing some rise, none or a combination of the two in cumulative cases within and new cases in its neighbouring districts in the orange zone, it is crucial to continue with the lockdown for at least a fortnight or a month, remain alert for further casualties and conduct random testing at a large scale. The most affected districts or hotspots fall under the red zone.

These districts continue to experience a combination of an increase, no increase or a combination of the two in cumulative cases within and new cases in its neighbouring districts categories. Focus on these districts should be microscopic and testing should be undertaken at a larger scale. Strict administrative lockdown must continue in these districts for the next one and half months. Due to these areas being the most vulnerable to the spread of the virus, any leniency shown towards relaxation of social distancing could prove disastrous not only for the locality but potentially for the entire state and the country.

The data from the World Health Organisation reveals the availability of hospital beds per thousand population that is as low as 7 per ten thousand. The lockdown might seem like a band-aid approach to many, yet, statistics about health infrastructure questions the preparedness of the nation against the novel virus. Hence, given the low health facilities in the country, the government might have to steamroller the lockdown further to contain this virus.

Colour categorisation of the districts needs to become more strict than what the government has proposed in their report. Presently, these zones have been created based on two parameters, which are number of cases within districts and the number of cases for the last 15 days. Following the stricter approach of zonal categorisation as presented above, there are very few numbers of green zones implying the need to extend the ongoing lockdown.

All districts must follow a  systematic cases-free cluster joining chain strategy, wherein the lockdown relaxation will supersede percolation from a selected green zone, marked as a central cluster, to the neighbouring districts as they become COVID free. The central cluster will be known as COVID-free epicentre, and the next step will be to restore greens in the adjacent districts by increasing the number of tests and following the lockdown criteria as per respective color categorisations.

This strategy will continue until we reach the final infected district and paint it green. These systematic chains strategy can be excuted in different regions simaltenously. Special attention should be given to the inclusion of the neighbourhoods when relaxing lockdown restrictions in a particular district. This model emphasises on adding this extra check to the virus spread in the adjacent districts when considering lockdown dismissal or implementing partial lockdown.

The mobility across intra-state and even inter-state borders is common and illustrious of the activities like access to shared resources, marketplace, and livelihoods. Infection through these maneuverable cases can spike at the borders and spread to the rest of the areas in no time.

Distribution of recommended lockdown zones by districts of India 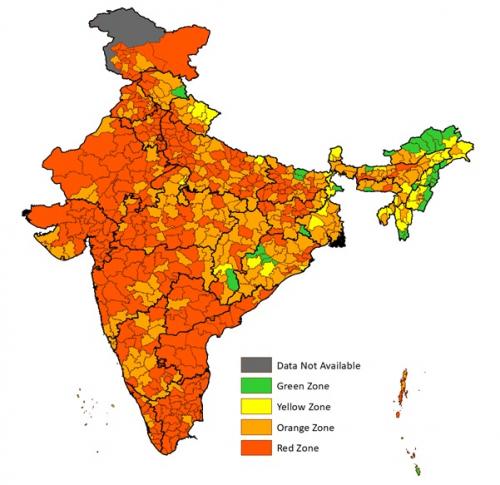 Indian states following the ‘cluster-containment’ strategy have emerged as signs of hope for the rest of the nation. The states of Kerala and Odisha, along with some districts of Rajasthan and Uttar Pradesh, have managed to keep the cases low by imposing strict lockdowns. Behind their success so far have been well-organised initiatives to spread awareness, setting up specialised hospitals, and screening a large number of people along with protracted efforts to isolate the infected people.

These success stories share similar features that need to be implemented country-wide. It is also constructive to learn from the spread of the Middle East respiratory syndrome (MERS) in various countries. Kim Woo-Joo, an infectious disease specialist at Korea University, noted that their experience from the spread of MERS mandates laboratory testing to contain the contagious disease.

While it is rewarding to learn from the success stories, it is equally important to get familiar with the countries which learned their lessons the hard way. The Japenese island, Hokkaido, is suffering from the second wave of coronavirus, and experts say that this aftermath could have been avoided if the lockdown was not relaxed too soon.

China also faced a similar issue after lifting restrictions from international borders. The empirical example of a US city, St. Louis, de facto shows two spikes in the Spanish-Flu cases. The city dismissed its social distancing norms as the pandemic was receding, and the deaths went up again. These case studies should be a lesson to all the countries combatting the novel coronavirus. So the government should follow a comparatively sticter grading approach lift the lock-downs in several steps without showing any hurry.

Here we have attempted to give the best possible district-wise representation of the severity of the spread, it may be noted that the map is following geographical boundaries from Census 2011. The districts that have not changed can trustfully follow the recommendations as it stands. In contrast, the districts which have been bifurcated post-2011 can follow the same methodology to decide their zonal category and execute actions accordingly.

All authors except Smriti Misra are research scholar at International Institute for Population Sciences, Mumbai. Misra is a postgraduate student at London School of Economics and Political Science.