Eluru mystery disease: What needs to be done

Lead contamination in water samples, nickel poisoning in milk and pesticides in vegetables are being investigated 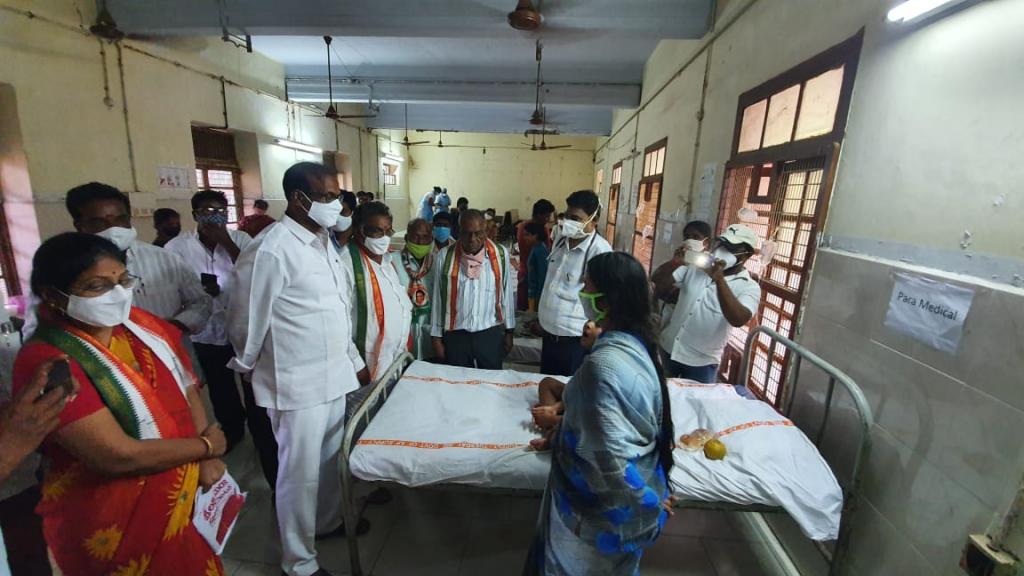 More than 600 have been hospitalised and three dead in Eluru, Andhra Pradesh, from the mystery disease. Photo: Jetti Gurunadha Rao / Twitter

More than 600 people were hospitalised and three died after a mystery illness broke out in Eluru, Andhra Pradesh in December 2020. The real cause of the disease is still elusive.

The patients were rushed to government hospitals with sudden epileptic seizures, anxiety, neurological symptoms, dizziness, vomiting, etc on December 5, 2020. The patients tested negative for the novel coronavirus and other viruses.

Fortunately, most patients recovered in a couple of hours or a day.

Several central scientific and research organisations trusted to investigate the disease have identified lead and organochlorides (used in pesticides) in the blood of patients as well as in water samples, nickel in milk samples and pesticides in vegetables.

The root cause of the syndrome is being investigated; meanwhile, the role of aquaculture and nearby Kolleru lake wetland ecosystem abutting Eluru should also be explored for the presence of pesticides residues in fish and vegetables.

Immediate remedial measures on the high concentrations of lead, nickel and pesticides and follow-up on health conditions in patients should be taken up simultaneously.

Lead is a toxic chemical that slowly builds up in the body over a period. The causative agents of lead contamination are industrial emissions, automobiles, old water pipes, lead paints and toys.

Automobiles contribute significantly to lead contamination. The fumes emitted by cars and motorcycles from burning of fossil fuels contribute to lead poisoning.

The American National Institute of Occupational Safety and Health examined that the human body absorbs a higher level of lead when breathed in, especially by automobile fumes. However, epileptic seizures were not reported for lead poisoning.

Kidney and brain damage may occur if the lead levels are high. There are several examples of lead contamination around the world, the most striking one being from Flint, Michigan, United States.

In 2014, the state of Michigan changed water supply from Lake Huron to Flint River and used lead pipes to do so. The residents reported changes in the water colour, smell and taste. The danger levels of lead were found in water supplied to homes.

The water tested had 104 parts per billion (ppb) of lead while the United States Environmental Protection Agency limits suggest 15 ppb. Six years on, the work to replace lead pipes is still in progress. Machine language is being used to identify old lead pipes. It should be noted that school children in the US are tested periodically for lead.

There are no major industries that emit lead in Eluru. There is, however, a possibility of lead pipes being used in water supply in some old town.

Nickel poisoning reportedly induced epileptic seizures for the first time in Belgium, according to journal Epilepsia by Denays et al in 2005. In Euluru, studies have also shown a correlation between nickel poisoning with tonic clonic seizures.

Pesticides in food and water cause chronic health conditions. The Kasaragod endosulfan tragedy is a recent example from Kerala that grabbed national attention and throws a spotlight on the deleterious effects of excessive pesticide use. Several people reported health problems in the area, allegedly because farmers sprayed endosulfan formulation of 0.1 per cent on cashew plantations from helicopters for over 20 years.

In the Eluru syndrome, a private laboratory in Vijayawada analysed and recorded several organochlorine compounds in the water. One of them, Ortho-Para-Dichloro-Diphenyl-dichloroethane (OP-DDD), was found in concentration of 15.23 milligrams per litre when the acceptable limit is 0.0001 mg / l.

Eluru is considered an aquaculture hub and is well-known for production and export of fish. The reports released so far did not do any analysis on the fish, which show bio-accumulated heavy metals and pesticides residues in contaminated water. The transfer of contaminants to human from fish is very efficient.

Eluru is close to Kolleru lake, a large wetland ecosystem. The aquaculture was developed in the area over past last 30 year in the villages abutting the lake. The lake was studied and pesticide residues found in the tissues of the fish via Gas Liquid Chromatography and published in the Environmental Toxicology by Amaraneni Rao et al 2001.

Apart from the pesticides and heavy metals in aquaculture near Kolleru lake was studied and published in 2016. Heavy metals such as lead, cadmium, nickel, chromium, arsenic were also detected in sediments, prawns, water and fish feed.

Eluru and its environs Kaikalur and Akividu are distribution centers of the fish produce exported mainly to Kolkata and north-eastern states.

It is imperative that the fish, water and soil around the Kolleru lake region should be studied extensively for toxic metal contaminants and pesticide residues to understand the long-term effects of health and to trace the origins of the syndrome.

A comprehensive study of all drinking water sources, including mineral bottled water, needs to be done across Andhra Pradesh to assess any similar contamination. The tests would also throw light on various ailments afflicting the coastal Andhra.

The water quality reports of each drinking water source should to be made available to all households through mobile apps, as it is practiced in the US. The school children, here in India, must be screened for lead periodically as in the US.

The patients that recovered from the syndrome should be studied longitudinally, and a follow up should be done to better understand the illness.

Anonymous hospital case histories and detailed laboratory reports must be documented and placed in a centralised database to enable collaborative work from scientists all over the world to understand the syndrome.

While the Eluru Syndrome remain a mystery, the underlying problems — heavy metals, pesticide pollution — should be addressed immediately.