Health of India’s states: What the latest health report means

In the last 26 years, diabetes increased by 174 per cent and Ischaemic Heart Disease (IHD) went up by 104 per cent. IHD and Chronic Obstructive Pulmonary Disease (COPD) were the leading causes of premature death and ill-health in 2016, overtaking lower respiratory infections and diarrhoeal diseases. However, the transition does not mean that communicable diseases are taken care of. 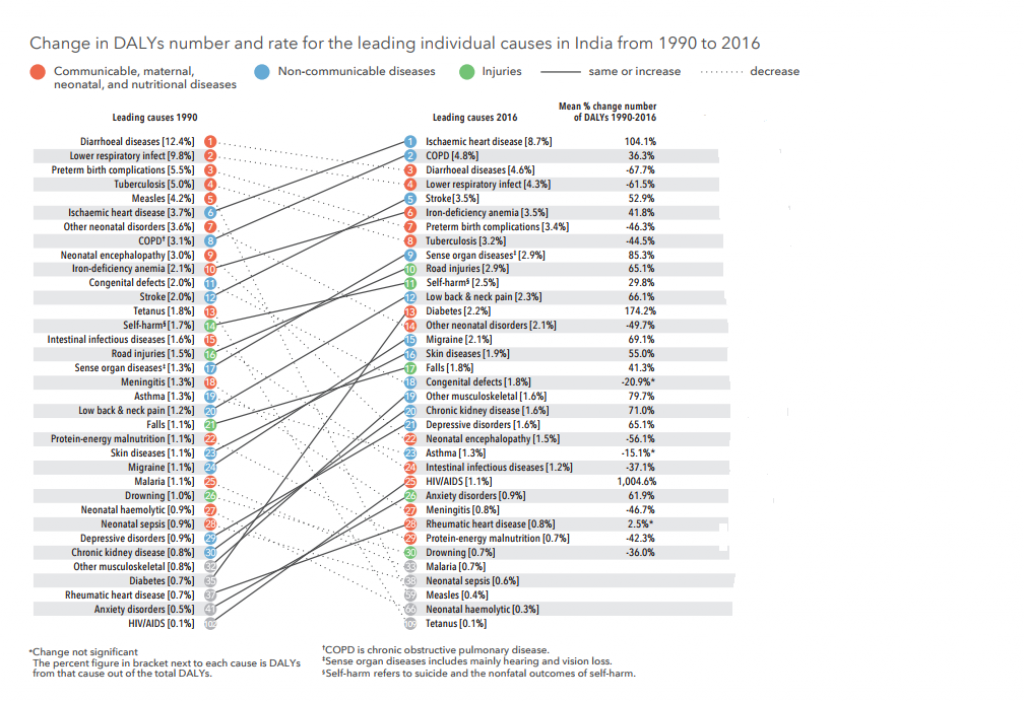 Kerala, Goa and Tamil Nadu have clearly transitioned while Bihar, Jharkhand, Uttar Pradesh and Rajasthan are still in the process. The report also provides a comparison of the epidemiological transition ratio, defined as the ratio of Disability Adjusted Life Years (DALYs) caused by CMNNDs to those caused by NCDs and injuries shows a wide disparity amongst the states. In Kerala, this ratio is 0.16 compared to Bihar, where the ratio is 0.74. States with higher the ratio face more challenge from the double burden of diseases.

Epidemiological transition ratios of the states of India, 1990 and 2016 (second figure) 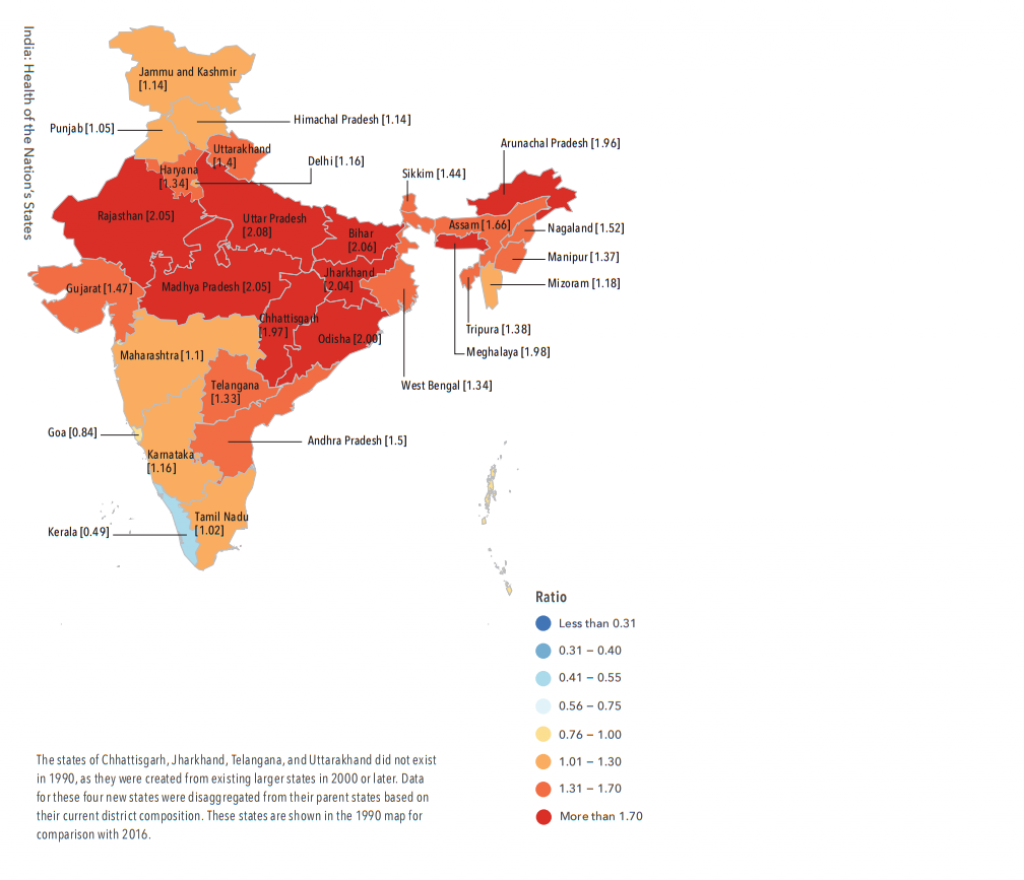 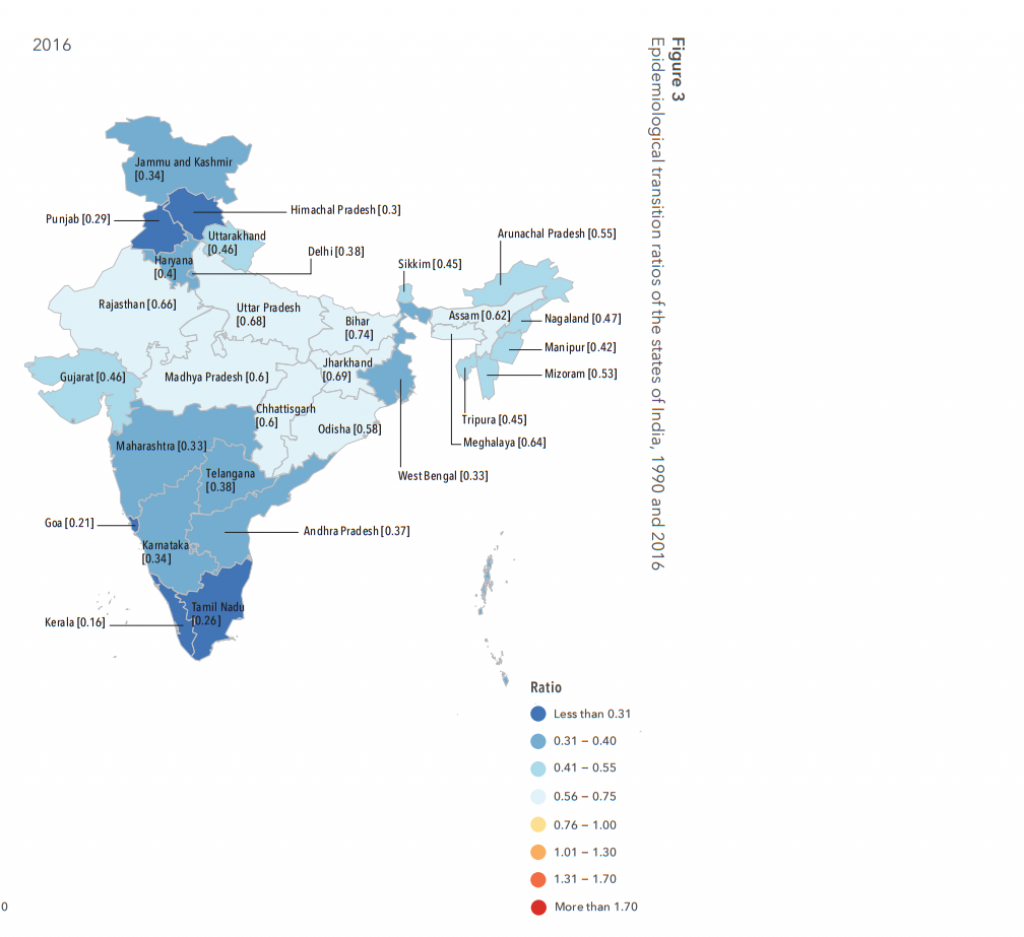 The report also looks at 17 risk factors that are contributing to the disease burden in India. However, in our latest annual publication Body Burden: Lifestyle Diseases, we find that risk factors such as environmental toxins, stress and climate change need to be considered as well to devise strategies. The Indian Council of Medical research’s report includes “other environmental risks” but doesn’t discuss in enough detail to understand whether chemicals such as, polychlorinated biphenyls, phthalates and pesticides have been considered or not. Body Burden has found these to be important triggers of diseases such as diabetes, cancers and heart diseases. Tackling these risk factors is difficult.

The World Health Organization (WHO) says by investing just US $1-3 per person per year, countries can dramatically reduce illness and deaths from this group of diseases. However, the cost will be much higher as WHO identifies only four (alcohol, tobacco, poor diet and lack of physical activity) risk factors.

The report would be used for data-driven and decentralised health planning and monitoring recommended by the National Health Policy 2017 and the NITI Aayog Action Agenda 2017–2020. But the report flags the issue of lack of primary data, which could be a problem for policy makers. For example, the latest comprehensive data on the economic burden of non-communicable diseases was calculated more than a decade ago by the National Commission on Macroeconomics and Health, in 2005. Estimates of expenditure to prevent and treat these chronic diseases—which require life-long treatment—are necessary to devise a health financing plan. This is the lacuna that needs to be filled in the future. Soumya Swaminathan, who headed ICMR till a few days back and is the newly-appointed deputy director general of World Health Organisation in Geneva suggested that this report is published every three years.

The data would help but might not be the solution. At the release of the report, expert after expert talked about the need for multisectoral efforts to take care of the risk factors. Experience suggests that this would take more effort than just putting the data together.