Under-nourished women, in all likelihood, became under-nourished mothers with a greater chance of giving birth to low birth-weight babies, perpetuating this cycle

Almost a quarter of women (23 per cent) of reproductive age (15-49 years) in India are thin, with a body mass index of less than 18.5 kilogrammes per square metre. This proportion is higher in rural areas (27 per cent) than in urban areas (16 per cent) and tends to decrease with the wealth quintile of households.

Almost a third of women (26.8 per cent) are married before turning 18. Inadequate dietary intake is often the cause of poor nutritional status of women. Less than half the women consume a wholesome diet, with only 47 per cent having a daily intake of green leafy vegetables, 46 per cent cosuming fruits once a week and 45 per cent eating pulses daily.

Under-nourished women, in all likelihood, become under-nourished mothers with a greater chance of giving birth to low birth-weight babies more prone to infections and growth failure. This perpetuates an inter-generational cycle of malnutrition.

The inter-generational cycle of malnutrition: A vicious cycle leading to child growth failure 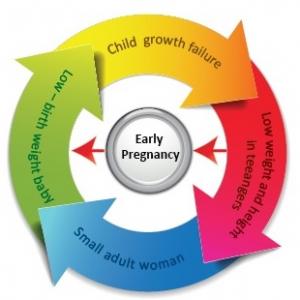 In India, every third child is under-weight (35.7 per cent) or stunted (38.4 per cent) and about 21 per cent are wasted, according to data from the 2015-16 National Family Health Survey. More than half (58.4 per cent) children under the age of five are anaemic.

This inter-generational cycle of under-nutrition is heightened by poverty, social exclusion and gender discrimination, leading to irreversible effects on cognitive and physical development. Malnutrition in women makes them prone to infections and undermines their productivity and ability to survive childbirth.

Investment in nutrition is crucial to achieving all the sustainable development goals (SDG), especially SDG 3, that aims to ensure health lives and well-being to achieve the target of reducing neonatal and child mortality and maternal mortality.

More than half the adolescents (10-19 years) are short, thin or overweight, while above 80 per cent suffer from under-nutrition and micro-nutrient deficiencies, according to a report based on the Comprehensive National Nutrition Survey.

About 40 per cent adoelscent girls suffer from aneamia. A quarter of adolecent girls are deprived of four school-based services including mid-day meals, biannual health checkups, deworming and weekly iron and folic acid supplementation.

Poor maternal nutritional status, access to health services and complementary feeding practices are some of the associated factors. A study from Bangladesh also suggests a strong link between maternal height and increased infant and under-five mortality.

Findings from the Understanding the lives of Adolescents and Young Adults study suggests complex undermining factors, including nutrition affecting their well-being.

Case studies across India shows how adolescents and young girls are caught in the inter-generational cycle of malnutrition. Several factors play a role, including early marriage, poor socio-economic conditions, lack of proper nutrition and lack of education.

A review on the approach to break the inter-generational cycle of malnutrition suggests investing in nutrition over lifespan, as this has an impact over generations.

The inter-generational approach can have a lasting impact on the underlying factors of poverty and education levels in women. Anaemia in adolescents has a lasting impact, posing risk of maternal mortality, low birth weight and higher risk of anemia in the newborn. The Weekly Iron and Folic Acid Suplementation programme to control anemia in adolscents is effective in reducing anemia and helps beak the inter-generational cycle of malnutrition.

Evidence suggests stunting can be irrevocable if not addressed in the first 1,000 days, leading to the inter-generational cycle of malnutrition. The adolescent period is also a critical period for intervening to improve nutritional status to break the cycle of poor growth and development in offspring.

Adolescence can present an oppurtunity for interventions to reverse stunting and break the inter-generational cycle of child under-nutrition. The United Nations Standing Committee on Nutrition said birth weight can be improved by improving both dietery quality and quantity. Tackling anaemia and improving the nutritional status of pregnant mothers has a positive impact on birth outcome.

Early marriage, lack of education and poverty are some of the challenges that impact the health of women and led to malnutrition. The National Nutrition Strategy called for a lifecycle approach, with a focus on nutrition interventions during critical periods for improved growth and development.

Preventing early marriage, teen pregnancies and improving women’s nutritional status can go a long way in breaking the inter-generational cycle of under-nutrition. Stringent implementaion of adolescent reproductive and sexual health porgrammes can break the vicious cycle of malnutrition by protecting and supporting adolescent health and well-being.

Renewed investment in maternal nutrition and a holistic approach — including improved health, nutrition and education — will contribute to achieving the ambitious targets set by the Prime Minister's Overarching Scheme for Holistic Nutrition (POSHAN) Abhiyaan 2022, the World Health Organization’s Global Targets 2025 and the SDG 2030.