Why should women always take on the burden of contraception medications, and not men? 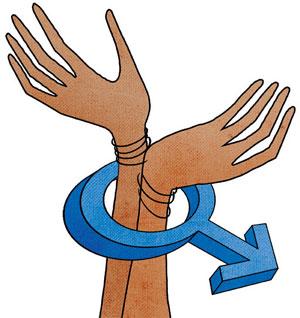 For the last half a century or so, Malthusian fears have goaded governments, democratic and authoritarian alike, to forge an impressive array of technologies aimed at controlling population growth. However, to this day the womb remains the preferred site of such interventions, either by coercion or by choice.

Last month, the Indian government widened the reproductive “basket of choices” by adding a new subversive called the injectable contraceptive that derails for at least three months the natural order of things that culminate in the release of an egg. In short, no eggs, no conception. The new birth control drug, marketed as Depo-Provera, was approved by a technical committee last year, and will be introduced in phases, beginning with district hospitals and colleges.

Women’s rights groups, however, are upset, as they believe the government has overlooked serious side-effects of Depo-Provera, which is a variety of progestin, a synthetic hormone that mimics the naturally occurring progesterone. In the US, it is sold with a warning that it may render bones brittle. Other side-effects include irregular menstrual bleeding, irregular periods, increased risk of breast cancer and imperiling the life of infants exposed to it.

On the other hand, supporters of Depo-Provera tout it as a highly effective antidote to pregnancy. Besides, it is claimed, the drug reduces risks of afflictions like anaemia, endometrial cancer and uterine fibroids that have come to plague ageing women.

So how does one navigate this muddle of contradictory and complex science? Even based on a watered-down understanding of what it implies, can one answer questions like does the convenience of not getting pregnant far outweigh the potential risks? Or whether an injectable contraceptive is less risky than a birth control pill? Let alone poor illiterate woman, this understanding would be beyond the ken of even an average educated person. Nevertheless, family planning officials claim that women, especially poor women, are willing to gamble bodily harm as for them the danger and misery of unwanted pregnancy and unsafe abortions weigh far greater.

While it is true that modern methods of contraception have given women control over their bodies, but to say that they accept the risks knowingly would be a little disingenuous, as most women are often not even informed of all the risks. To be sure, we still have precious little idea about the long-term impact of synthetic hormones on women’s bodies, simply because few studies have looked at it. Recent studies suggest the pill might cause effects like depression, loss of libido and orgasm, fatigue, and in some cases, even death. In 2013, the revelation that at least 23 Canadian women may have died after taking two of the most popular birth control pills in the world, Bayer’s Yaz and Yasmin, led to thousands of class-action lawsuits against the company, which it eventually settled out of court. Holly Grigg Spall, author of Sweetening the Pill, argues that by doing so, the company avoided “further scrutiny of the research and marketing practices of products said to have led to so many women experiencing pulmonary embolisms, strokes and heart attacks as a result of their drugs”.

Is it not plausible, one may wonder, that millions of women around the world may have experienced something similar to what their Canadian counterparts went through? We will never know unless someone tries to find out. This raises the inconvenient question of why is it that only women’s bodies should absorb the risks of contraception when men are equal partners in crime? Why is it that there is no contraceptive pill for men?

Researchers believe the lack of a contraceptive pill for men has to do with two factors. One, it is much easier to block the release of one egg than to stanch the flow of millions of sperms per day. Two, there is very little funding for clinical trials, even as there are at least five promising candidates in the pipeline. It would be a pity if none makes the grade for lack of funds, as women desperately need a break from holding the baby of contraception.