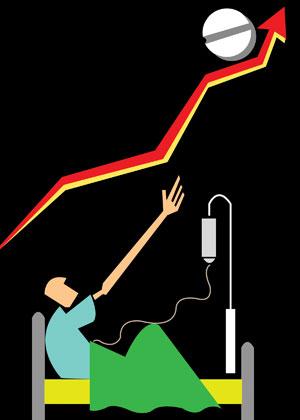 If ever India needed a clear endorsement of its laws on intellectual property rights (IPRs) and their application in meeting public health priorities, it has come from the highest quarters. The report of the UN Secretary General’s High Level Panel (HLP) on Access to Medicines has, directly and indirectly, noted with approval the route taken by India since 2005, when it enacted a new patent law to comply with the World Trade Organization’s Agreement on Trade Related Aspects of IP Rights (TRIPS). The report, released end of September, is firm on making full use of the space available in the WTO rules to promote access to medicines.

This has been the cornerstone of India’s patent law, which lays down the criteria for patentability and includes provisions for granting compulsory licences to override patents in special circumstances. These measures have been under constant attack from pharma multinationals and the US. Taking note of the seriousness of such pressures, the HLP says governments and the private sector must refrain from explicit or implicit threats, tactics or strategies that undermine the right of WTO members to use flexibilities under TRIPS as reaffirmed by the Doha Declaration and public health. A panel member, Michael Kirby, and retired Justice of the High Court of Australia, says countries must not only register complaints against undue political and economic pressure, but also “need to take strong, effective measures against offending members” to ensure access to health technologies. This is a radical proposal. At the press briefing on the report’s key recommendations, Kirby went so far as to say that countries that threaten and retaliate against others for using their entitlements under the TRIPS agreement will be forced to face serious sanctions.

All this should be music to policymakers and governments of developing countries who have faced unrelenting pressure from drug majors whenever they attempted to use flexibilities under TRIPS. The HLP was set up to find solutions to the incoherencies between international human rights which enshrine public health objectives, IPRs and trade. Admittedly, policy incoherencies arise when legitimate economic, social and political interests and priorities are misaligned or are in conflict with the right to health, as the HLP president, Ruth Dreifuss, notes.

What compounds the conflict is the huge gap in the accountability standards. The report notes, “An important factor behind the incoherence between human rights, trade, intellectual property and public health lies in the diverse accountability mechanisms and transparency levels of these different, but overlapping spheres.”

While trade and IPR-related accountability mechanisms are regulated by the WTO’s dispute settlement body, “human rights and public health accountability mechanisms are characterised by varying and often limited degrees of precision, legal weight and enforceability,” it says. The problem specifically is the WTO. It is not a UN agency. Can it be forced to ensure that its members comply with the Doha Declaration?

There are other difficulties. The report recommends greater transparency in drug pricing and delinking prices of medicines from research and development (R&D) costs. This is anathema to the US and its industry lobbies which have condemned the report. It’s not difficult to see the sore points. One is the call for separation of the costs of R&D, production, marketing and distribution of health technology. The other is the listing of any public funding received in the development of the health technology, including tax credits, subsidies and grants. It has also called on the World Health Organization to set up an “accessible international database of prices of patented and generic medicines and biosimilars in the private and public sectors of all countries where they are registered”. The pharma industry, which has so far been giving a consolidated and vastly inflated figure on R&D costs, is certain to resist any move to expose their claims to global scrutiny.