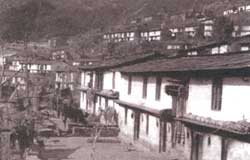 TODAY, the so-called highly developed countries are focussing their attention on traditional knowledge. On one hand, we are thinking of inhabiting the moon and on the other hand, there is a growing emphasis on the conservation of natural resources and cultures, on natural farming, traditional forest management, cropping, ecotourism and biodiversity. 'Eco-friendly' has become a buzzword. Recently, there was a seminar on "Sustainable Mountain Development" in Garhwal University, Srinagar, in Uttar Pradesh (up). The seminar revealed that 95 per cent of the modern knowledge about the local flora and fauna which forms the basis of scientific experiments conducted in developed countries, has been provided by local villagers.

It seems that the developed countries have understood the disastrous consequences of uncontrolled progress. But ironically, these very nations are developing atomic power and also patenting the knowledge acquired from indigenous peoples. Hence, destruction of traditional, cultural and natural resources continues unabated. The Valley of Flowers in up is losing its beauty because weeds and bushes are taking over. Traditionally, shepherds graze their sheep in the valley for three to four months. As a result of sufficient manure, the flowers dazzle in full bloom. But some years ago, there was a government' directive to stop grazing on scientists' recommendation, causing land degradation.

About 60 per cent of the world's flora and fauna are reportedly found in the Himalaya. This rich biodiversity has been preserved mainly by indigenous wisdom over decades. The Himalayan villages were self-sufficient before the '50s. Then came the onslaught of Western consumerist values, adversely affecting the region. Forests disappeared alarmingly, community feelings began to dwindle and natural calamities became frequent. It is only now that the developed countries are coming up with all kinds of fashionable concepts to save the Himalaya and mouthing the concepts of eco-friendliness, eco-management, village eco-development and eco-tourism.
Hariyali Devi is a densely forested area in Chamoli district of the Garhwal Himalaya. This forest has not emerged as a result of afforestation or any movement against tree felling. The temple of goddess Hariyali Devi stands at about 10,000 ft above the sea level surrounded by a thick forest of Banz (oak), Burans (rhododendron), Kharsu, Moru, Kafal and dozens of different local shrubs and bushes@ Pilgrims remove their shoes 200 m away from the temple and are required to visit it wearing clothes of sober hue, as very @bright coloured clothes are prohibited; and one has to maintain total silence while visiting the forest. Bright clothes, whistles or shouts have been known to frighten wild animals.

Fetching fodder or fuel from this forest is disallowed; people firmly believe that if someone hurts the trees, whistles or shouts, the forest fairies (acharies) will be angered. The forest - a part of the temple - is cx)nsidered holy. All these traditions and myths, which have a ve6 logical basis, were born out of the local indigenous wisdom to conserve biodiversity. For instance, the doli (palanquin) of the deity Chalda Mahasu, is accompanied by high-breed rams which are fed and protected by the villagers. Probably the reason is to improve their breed. In some sacred places, killing of deer seen in a pair, is forbidden. Worshipping water sources, small canals (gule) and trees is fairly common in the mountains. Mixed cropping in the mountains is another wise tradition. Usually, the edges of paddy fields are lined with finger millet. Barley and wheat are sometimes grown in the wet corners of the same field, as the corners are conducive for their growth. These traditions control crop diseases and ensure effective fertilisation.

Although researchers are now flocking to the Himalaya looking for traditional wisdom and indigenous support systems, the lopsided developmental policies of developing countries are destroying local knowledge. it is high time that a choice was made between Western development patterns and traditional knowledge. The latter definitely ensures environment-friendly economy. Before it is too late, we must join hands to work together to realise this goal.