The Valley of Flowers in Uttarakhand, a World Heritage Site, may have been damaged in the recent floods in the state. A look at what makes this biodiversity-rich region susceptible to disturbance

The Valley of Flowers (VOF) National Park in Uttarakhand runs in an east-west direction along the banks of the river Pushpawati. Its rich biodiversity and outstanding natural beauty have earned it the status of a World Heritage Site from UNESCO. However, this region, with its picturesque and species-rich alpine meadows, is under threat.

What is at stake

The VOF has a highly heterogeneous landscape, ranging from low-lying flat and gentle slopes, to steep slopes, unstable glacial moraines, stream banks, forest-meadow edges and snow-bound areas. The mountain system consists of a series of spurs all around the valley. Many rivulets cut across the valley and meet the river Pushpawati, which originates in the Tipra glacier.

This unique geo-morphological heterogeneity has resulted in a rich diversity of flowering plants, which attracts a number of botanists and tourists from all over the world. During my long stay in VOF beginning 1993, I recorded a total of 520 species of higher plants; of these 498 belong to flowering plants, 18 fern species and 4 conifers. The VOF harbours 472 species of herbs, 41 species of shrubs and 8 species of trees. Asteraceae is the most dominant family here, followed by Rosaceae, Ranunculaceae, and Orchidaceae. Of the 520 species, 16 species are endemic to Indian Himalaya and 31 species are of rare and endangered categories. 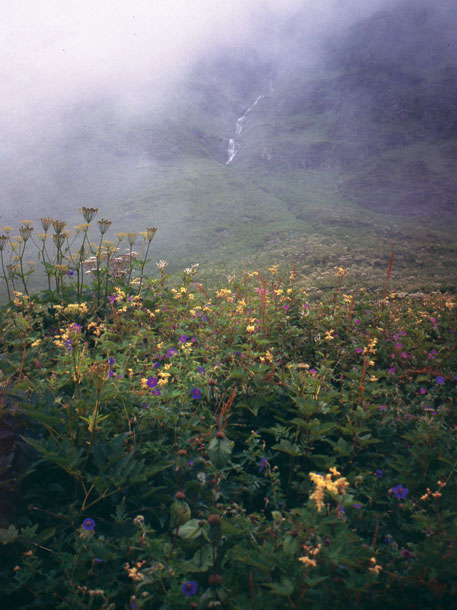 In the face of the current disaster in Uttarakhand, it is time to reflect on the fragility of the Himalayan ecosystem, and the importance of conserving its bounty. Once the hill slopes are exposed, continuous rainfall, floods and subsequent landslides can change and destroy the entire ecosystem. In such an event, the existing climax species would be lost. The process of succession of species would start again on exposed land. The first few species to come up in an area in the first stages of succession are weeds. The composition of the new ecosystem thus could be very different from its present day composition, affecting the natural beauty of the place.

During my years of stay at Ghangaria, 3 km downhill from the VOF and 3,000 m above mean sea level, I noticed rocks and boulders were frequently detonated for use in the construction of buildings and the widening of the pedestrian route to the Sikh religious site Hemkund Sahib. Such detonation is quite dangerous for the valley’s ecosystem as these activities affect the fragile hill slopes, rendering them vulnerable to landslides.

A plan to construct a motorable road up to Hemkund Sahib or at least up to Ghangaria had been proposed in 2001-02. Although the road was not constructed because of objections raised by conservationists, a parking facility for vehicles was constructed on the banks of the Alaknanda at Govindghat despite concerns about its feasibility that I repeatedly raised. Unfortunately, the recent disaster washed away over 200 vehicles from the parking facility.