High on broth, low on geography

Geographical indication tags are being handed out indiscriminately—with no strategy 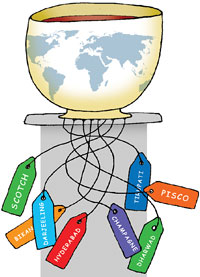 This Eid, Hyderabad was on a high—a haleem high. Haleem is a great dish, a rich broth of wheat, lentils and meat that the city feasts on during the month of Ramadan, and it hit the headlines because it had just been granted a geographical indication (GI) certificate.

Newspapers went into raptures and the clutch of restaurateurs who had got together to claim the GI tag acted like they had made it to the Michelin Guide. The breathless reporting that celebrated the development was ill-informed and exposed the many misconceptions that surround GI in this country.

What exactly is a GI? In the simplest terms it is a kind of intellectual property right (IPR) that is granted to a product because of its geographical uniqueness. Here’s how the World Intellectual Property Organisation (WIPO) describes it: “A GI is a sign used on goods that have a specific geographical origin and possess qualities or a reputation that are due to that place of origin. Most commonly, a GI consists of the name of the place of origin of the goods. Agricultural products typically have qualities that derive from their place of production and are influenced by specific local factors, such as climate and soil.” The best examples are Champagne made exclusively from grapes grown in the Champagne region of France, Scotch whiskey from Scotland and Darjeeling tea from, of course, Darjeeling. It is a community shared benefit that aims to protect and expand markets.

So then you wonder why a dish that originated in the Middle East and is consumed routinely in the countries of that region and is widely popular in other South Asian states to boot should get a GI for its Hyderabad variant. Or for that matter why the laddoos made by the wealthy Tirupati temple trust, a private entity, should also be exalted thus when the sweets are offered only to devotees who worship at the temple. Nor is it clear why the Dharwad peda, one among dozens of variants of the ubiquitous sweet, needed GI unlike its indifferent cousin in Mathura.

The small band of eateries that comprises the Haleem Makers’ Association of Hyderabad may have been successful in staking a GI claim and getting P H Kurian, Controller- General of Patents, Designs, Trademarks and Geographical Indications Registry, to award them the certificate. But it is a case that opens up a much-need debate on how India goes about deploying this particular form of IPR—and to what end.

Newspaper reports quoted Kurian as saying that the GI certificate did not bar anyone from preparing haleem, but they could no longer market it as Hyderabadi haleem. That would be an impossible order to police since dozens of eateries in the city have been purveying haleem for decades. Kurian said haleem makers would now have to “follow prescribed standards in its preparation”—a tall order since many of the older and more popular eateries in Hyderabad have their own traditions handed down over the generations and can with justifications claim that theirs is as authentic as the others.

The haleem case has once again stirred the GI cauldron and is illustrative of the confusion that abounds over what goods qualify for the label. Since September 15, 2003, when its GI Act came into force, India has accorded this status to 132 products, most of them handicrafts and agricultural crops.

Only eight items in this list are “manufactured” goods, one of these being the famous Pisco grape brandy of Peru, which is the only foreign GI registered in India. For the most part GIs appear to have done little to enhance the commercial value of such products simply because the government has done precious little to help the communities to capitalise on this advantage.

The European Union views it as a significant trade tool. European communities have registered some 4,800 GIs, of which the bulk (4,200) is for wines and spirits. These are money spinners which bring in considerable export earnings, specially in France. The country’s 593 GIs (466 for wines and spirits) generate € 19 billion and “constitute a lifeline for 138,000 agricultural outfits”, according to an EU brief.

The Pisco’s rise to global fame is due to the sustained campaign launched by the Peruvian government to make it a popular drink. Every July, there are Pisco tasting parties across the country which culminate in a carnival on the last Sunday of the month when a colonial-era fountain in Lima’s main square spouts over 2,000 litres of the liquor for anyone to taste. This has helped Peru’s 380 producers to double their output over the past year.

In India, however, GI certificates are treated like merit cards—good to hang on the walls but of little use otherwise.