The joint committee set up by the Ministry of Environment and Forests and the Ministry of Tribal Affairs to enquire into the implementation of the Scheduled Tribes and Other Traditional Forest Dwellers (Recognition of the Forest Rights) Act, 2006, came out with its final report in December 2010. The report suggests that some states had not even started initial procedures to give rights to forest dwellers. But other states like Kerala had vested individual land titles.

We visited Ponkuzhi, a lively colony of Kattunaikka and Paniya tribals in Wayanad district of Kerala, in November 2010 while conducting fieldwork for a collaborative study by ATREE, an environmental group in Bengaluru, and NORAGRIC (the Department of Environment and Development Studies at the Norwegian University of Life Sciences). The study sought to place the Forest Rights Act (FRA) in a larger regional history of adivasi land alienation and legislative attempts by the state to restore alienated land.

The Ponkuzhi story is illustrative of the experience of Paniya tribals in Wayanad. It is a story of farm bondage and how a community gradually got alienated from forests. The powerlessness of the Paniya tribals is also a product of feudalism and colonisation for coffee and tea plantations.

In Ponkuzhi we also interacted with the Naikka tribals. A comparison of the two adivasi communities shows how within the same geographic region tribal communities could benefit differently from land and conservation rights.

But first, a brief profile of the two communities.

Paniyas constitute 45 per cent of the adivasi population in Wayanad. Bonded labourers till the 1970s, they later became a source of cheap labour for the coffee and tea plantations in the district. After bonded labour was abolished some people from the community received land from landlords, but most others were rendered landless. Several government land distribution schemes introduced after the abolition failed to take effect and most Paniyas continued to be landless.

Though the Paniyas have a long agricultural history, they did depend on forests for tubers. The tubers saved them from starvation during their years of bondage. But after abolition of farm bondage and subsequent availability of coolie work in colonised land, a marginal income ensured food security for the community and in turn reduced their dependence on forests.

Naikkas constitute nine per cent of Wayanad’s adivasi population. They are more dependent on non-timber forest produce (NTFP) than the Paniyas. The community’s relative isolation from communities outside forests has led to it been classified as “Primitive Vulnerable Tribal Groups” by the Kerala government.

These two separate colonies, located on the fringes of the Wayanad wildlife sanctuary and on either side of the National Highway 212, constitute the Ponkuzhi colony, which falls under Wayanad’s Noolpuzha panchayat.

Of the 79 Forest Rights Committees (FRC) formed in December 2008 in Wayanad to initiate the claims process, one FRC was constituted in Ponkuzhi. This FRC mainly consisted of Naikkas.

Nevertheless, the applications for community forest rights are instructive for researchers studying tribal communities in the region. They show how the dependence of the Paniyas on forests and forest resources is not as marked as that of the Naikkas'. For instance, the latter had applied for rights over amla (Phyllantus emblica), kurundoti (Sida sp), firewood, lichen, honey, traditional medicinal plants, fishing, firewood, cattle grazing and burial grounds. But the Paniya tribal community only applied for rights over firewood, fishing, amla, cattle grazing and burial grounds.

Such difference in dependencies also reflected a difference in opinion on the FRA. The Naikkas exuded optimism and security. Take Kamala, a Naikka FRC member, for instance. Aware of her role and responsibilities as an FRC member, she had helped people in her colony when they filed claims. She told us, “Receiving these titles means the government is finally doing something for us. We can now do what we want with this land, and once we receive community rights we can earn more money.”

Madhavan, chairperson of the FRC committee, also expressed hope that FRA would give them security in accessing forest resources. “The comfort we get living here, we can get nowhere. Here we don’t have to pay for basic necessities in life like water and firewood. Life in (the) town will be very difficult for us. We are not used to it,” Madhavan told us.

In contrast, Paniyas were pessimistic and insecure. In fact, Babu, the only Paniya FRC member was not even sure if he was a member. During discussions, people from his community sometimes described FRA as “a piece of paper”. Chandran who works with the forest department asked us, “What help will the FRA bring? They are not giving us extra land. Only a paper for the house that we already have. At least we have something for the house. We are getting nothing more or nothing less than what we already have. And what we have is so little; two cents or five cents. If they were at least giving us half an acre land, one family can survive well. We can do agriculture. We can keep two banana trees. But now with just 5 cents, I am not sure how this will benefit me."

Paniyas also have larger families than Naikkas. In some cases, more than three families reside in a house. Given their earlier bondage to farmlands and latter itinerancy as plantation coolies, they do not have access to a vast expanse of forestlands and consequently their land rights granted under the FRA resembled, in terms of extent, agriculturally unfeasible homestead rights.

In contrast, Naikkas’ optimism can be attributed to the fact that they are more dependent on forest resources than the Paniyas. They believe once the community forest rights are properly implemented their access to NTFP will increase. Unlike Paniyas, they do not feel a strong need for more land.

Paniyas’ pessimism stems from their long history of bonded labour. They believe obtaining land of their own could help them start cultivation. The community’s pessimism also owes to the failure of many well-intended pieces of state legislation to reform Wayanad land tenure system. Some pieces of legislation that sought to give land rights to the bonded labourers were not implemented in spirit.

The FRA seeks to undo historical injustice through land entitlements and strengthen India’s conservation regime through participation. But the Paniyas’ pasts have diluted potential entitlements the community could have gained through the Act. The community’s past has also compromised its conservation capabilities.

Today, landlessness, lack of work in a declining paddy farm sector, and fluctuating work availability in the plantation sector that is subject to periodical market and harvest crisis, has rendered the Paniyas vulnerable. Will the FRA add itself to the list of well-intended pieces of legislation that have bypassed the Paniyas? Or will it make forests meaningful for them again?

The authors are with the Centre for Environment and Development, ATREE, Bengaluru. Views expressed are personal. The study on which this essay is based, is supported by the Royal Norwegian Embassy, New Delhi 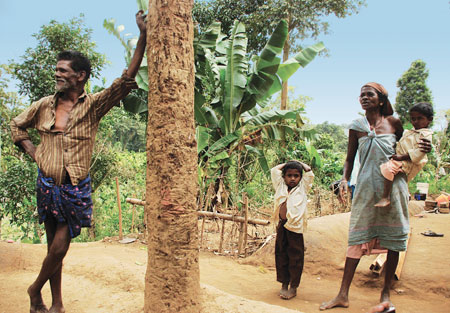