“I have been to Houston and other American cities. Europe too. Traffic is fast. People wait for the traffic signal to walk. They are disciplined. There are few people walking anyways. When will Kolkata become like that? May be never. Not with people like this. Not with so many people. They are not fit for a modern city.”

There is a certain angst at play when some people look at Western cities and then look at cities of the Indian subcontinent like Kolkata, Dhaka or Chennai, only to sigh deeply (I exclude “planned” dystopias like New Delhi as they represent the defanging of the people at a very different level. I write about cities where there is still hope and obstinacy). Slow traffic, roads of inadequate width, people on the streets and non-observance of traffic rules are cited as major reasons. Add to that rickshaws and bicycles, and Paris-like traffic looks like a perfectly unattainable dream.

At this point, the nature of the voiced solutions should be predictable—widening of roads in the city but not tearing down middle-class homes, getting people off the streets by tightening traffic rules and possibly, keeping rickshaws and bicycles off the busier areas. If some are already mentally nodding in agreement by now, there is something deeply troubling about the nature of imagination of our city, including the idea of urban citizenship, who is included in that imagination, who is not and who is the city for.

Among the upwardly mobile in the cities of the subcontinent as elsewhere in the Southern World, there is an evolving homogenising vision of what the future of global urbanity should look like—who is included, who is not. This vision has long been in the making, expressed privately in frustration in drawing rooms. Now this progressively exclusive vision has the confidence of being forthright about itself under the garb of urban development in the new century.

As a counter-force to this restrictive idea of urban citizenship, one might ask, who does the city really belong to? And whether one likes it, cringes at it, celebrates it or wants them gone, some facts are worth mentioning. At least, 40 per cent of the population of megalopolises like Kolkata—and at least 50 per cent of Dhaka—live in slums (bostee). Slums are not only the underbelly of a city, they are a living critique of the dominant socio-political order of the sunlit city. Hence the question of roads and traffic and the typical set of wants and frustrations that the elites express about the city are really another extended stage where the contestation of the question of ownership of the city is acted out. In such a contest, there really is a more plural view of the city from one side as opposed to a restrictive view—no slum ever dares or imagines that it will gobble up the quarters of the perfumed. The city that the slum and the lower middle-class imagines necessarily includes those who want to see the slums gone from the city and the jaywalkers gone from the street. 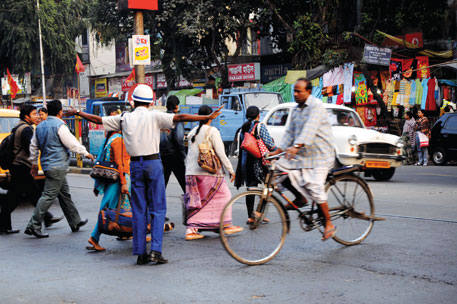 The dominant urban vision has no time or imagination for such plurality. The city that the perfumed classes of the subcontinent want almost never looks like the city they live in. Many are ashamed of it. I grew up and lived in Chetla, a locality in Kolkata that is not really throbbing, in short, not “posh”. Some of the unfortunate “posh” people who lived there used to say they lived “near New Alipore”—New Alipore being a “posh” area where much fewer people wearing lungi and brushing their teeth in the morning could be found on the street. This has interesting implications about how adjusted one is to reality in its full import. I wonder what some of these maladjusted would have thought about their great-grandfather from the village, garu (water carrying vessel) in hand, crossing a meadow in the morning to defecate in the field, but that is another question.

Given this, in contemporary times, the thrusts towards “cleaning up” the cities and its streets have something unholy at the core—distributive injustice. The city’s commons belong to everyone and so do its streets. The streets being common property to be used for transport, it deems fit that the proportion of a metalled road to footpath or side-walk in a given street should be commensurate with the nature of use. The proportion of people using the footpath to the proportion of people on cars on the streets are a good indicator of how the land intended for common transport is to be divided in general, with adjustment space for specific situations. But has anyone every heard of footpath-widening as opposed to road-widening? What is especially ironic is how the shrinking, unmaintained footpath has become lower priority in the urban development discourse. This development is really a staking out of territory for some, the nature of thrust showing who is in charge. Footpaths are fast becoming in the mind of the upwardly mobile what government hospitals have already become to them—places they do not go to and hence they do not care about.

Given its restrictive view of the urban future, the group wants to mark out a city for its own, within the city. This progressive loss of walking space and the sophisticated and exclusionary plans of “urban development” represent this thrust to mark out a city for people-like-them, with “cleaner” habits, “orderly” manners and “refined” sensibilities. There is a barely implicit collective will, laced with power and interest, and when those things combine, there surely is a way. The arc of that way, bends sharply towards to the interests of the new mandarins of the city in whose vision, an increasing proportion of the city dwellers are quasi-trespassers.

In a situation where most of the city inhabitants are considered trespassers to be avoided, and given the stupendous majority of the city being formed by such “quasi-trespassers”, one sees the perfumed classes conjuring up a feeling of being besieged and finding “order” and “security” in that spectacular physical expression of this maladjustment to the living ecology of a city—the gated communities. An entire generation is growing up with limited or no consciousness of the bostee, jhupri, khalpar and rail-line jhupris and udbastu (refugee) colonies. This lack of consciousness is not because the bostees do not exist in the city, but because the elites have now managed to carve out a sterilised existence where much of the city dare not show itself. Gated communities are also gates in the mind. All this would not have mattered if these elites were not disproportionately influential in conceiving the future of the whole city and not only their gated communities. Although these people have their gated communities and too much gritting of the teeth, there are not many gated roads—at least, not yet. 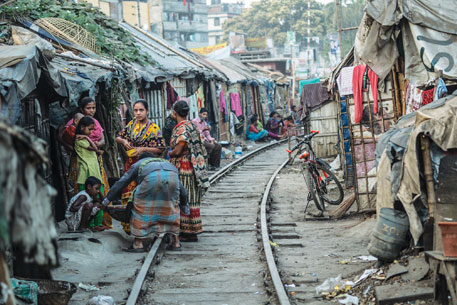 By top-down orders, increasing number of streets in Kolkata have seen bicycles being banned from plying on certain streets and consequent harassment of the bicyclists. Something is to be said of this “sanitisation” of streets of non-motorised transport. Given that the perfumed ones inhabit the same earth (if not the same world) as those who smell from armpits, the central question of a sustainable ecological future is not really irrelevant to the future of our cities.

Cornel West says that justice is what love looks like in public. In the context of urban resource allocation, distributive justice has to come from love of the city and all its people. This includes the rights of the pedestrian, the cart-plyer, the bicyclist and also the motorised. In case of the motorised, the question of passenger density is conceivably at the heart of the ecological question. By criminalising non-motor transport and encouraging the rapid expansion of low-passenger-density private four-wheeler transport, the policy-makers show which world they belong to. They, sadly, still belong to the same earth as before.

This brings us to jaywalking. The men and women behind the wheels hate these people—uncouth, running across streets everywhere. They just keep on coming, running, getting into buses and now into underground railways too. And so there are calls for tightening traffic rules with more punitive fines and calls for more vigilant and numerous traffic police. In the absence of gated streets, at least one can ensure a semblance of that by keeping “jaywalkers” out of the streets. These filthy impediments of the city are partly what go into making the idea of a “long-drive” so inherently appealing for some of the scions of the elite. Of course, they also love the greenery in the Amazon rainforests as shown in the National Geographic channel. Some of them have also worn wrist-bands to “Save the Tiger”.

The traffic police make half-hearted attempts to control jaywalking. They recruit volunteers from schools with poorer children who spend days at busy traffic intersections of the city. A gaudy T-shirt from the Traffic Department, a badge of false self-importance, saying “Traffic volunteer”, some stale snacks in a packet to take home, we have all seen them. The Save-the-Tiger kids have better things to do: studying harder for engineering entrance, now that more seats are “reserved”.

But the effort is bound to fail because the hapless homeguard doubling up as traffic police and the child in the gaudy T-shirt have their fathers, mothers, uncles, brothers or sisters somewhere, on some other intersection, jaywalking, holding up the progress of fast traffic and smooth urbanity, crossing on to the other side, living to fight another day. No wonder the volunteers and their minders do not push hard, beyond a point. There is the rub, it is not a question of who is jaywalking the streets. Rather it is a mixture of contending ideas of who the city belongs to, of predictable eyesores counter-posed with the want of Paris and Singapore in Kolkata and Dhaka—the stuff of fantasies of resident non-Indians, as Ashis Nandy might put it.

But the jaywalkers keep on walking. The urban-industrial vision of the elites is a totalitarian one—it brooks no dissent. It is distinctly irked by every interstice that is unfilled; it deems that as a nuisance at best and a law and order problem at worst. In our cities of ever decreasing interstices, of all crevices having been accounted for by census and survey, watched ever sternly by law, every act of daily risk-taking in brisk jaywalking restores a measure of dignity to the vaunted idea of the city’s commons. In this act, they are joined by “other Wests”, like the Reclaim the Streets (RTS) collective who reclaim streets through non-violent direct action, and those that inspire the massive motor-traffic jamming bicycle-rides of Critical Mass.

I have a feeling that it is in those jaywalkers and in their haphazard trajectories, in their at-times-hesitant-at-times-wanton disregard of the impatiently honking Hyundai Santro, in their collective stoppage of a small fleet of Boleros, Marutis and Indicas to cross the street just in time even though the state has given a green-light, lie the multiple trajectories to plural, open and just futures for our beloved cities.

Share the road: investment in walking and cycling road infrastructure