Hottest May on Earth was a cooler one for India

Internet has been flooded with the news of the hottest May month ever recorded on Earth after the release of Global Surface Temperature Anomaly data by NASA’s Goddard Institute for Space Studies (NASA GISS) on June 17. The surface temperature anomaly recorded in May 2014 was 0.76°C when compared over a base period of 1951-1980.

So why was India an exception in May 2014
May month kicked off with thunderstorms and rains in southern and central India due to which temperatures did not rise significantly. Then a low pressure system from the Bay of Bengal travelled towards the Arabian Sea through southern India and due to its influence, cloudy weather and rains were witnessed in southern and central India around May 10. Meanwhile, western disturbances kept hitting north India, especially Jammu and Kashmir (J&K). Climate Prediction Centre (CPC) of NOAA in the US issues monthly recorded anomalies (like temperature, precipitation) for India. As per CPC, many areas of India received more than 100 per cent (of normal) rainfall in May. Exceptions to this were western Maharashtra,western Madhya Pradesh, eastern Gujarat and eastern J&K where rainfall was less than 75 per cent of the normal. Hence frequent cloudy weather and rains in many parts of India kept significant heating away in the remaining parts of May, and overall India experienced a cooler May month. 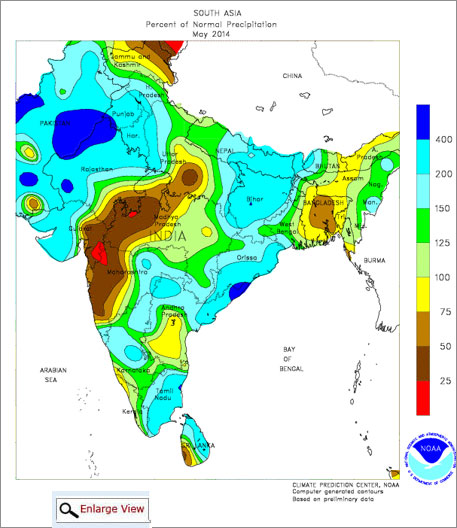 Linked with climate change?
Dealing with climate change in recent times has been a big challenge for  governments and meteorologists. Figuring out at what rate the climate is changing is a big challenge as there are no clear trends at a regional level, especially when we consider data like temperature anomaly on yearly basis. On averaging over an interval of some years, say a decade, we get some figure of average rise in temperature but it doesn’t work that well when compared with the individual years. Hence choosing the proper interval becomes very important when dealing with the climate change issues.

In the two decades from 1994-2014, surface temperature anomaly in May for Central India was between 0.2°C to 0.5°C. However, a contrast was seen in May 2014 when central India cooled by 0.2°C to 0.5°C instead of warming. This is why it becomes difficult to link such anomalies with climate change on yearly basis.

Need of monitoring Climate Change on regional levels
Although the global surface temperature anomalies have been positive since many years, there have been variations from country to country and even from state to state over the period, making it challenging to determine exactly how much the temperatures will be rising in the coming years in any particular region in any particular period. A comparative study of surface temperature anomalies of May 2014, 2013, 2012 and 2011 will give an idea of this. We can see that even the anomalies are varying every year which can be inferred from the colour shade over India (see image below). Dark orange or red indicates a temperature anomaly of 1°C to 4°C whereas white represents no anomaly. Hence there is no clear trend region-wise which can be used for framing policies to deal with climate change on a global and even on a national level. Hence, there is a strong need to monitor the changes happening on regional levels in India and, accordingly, frame the policies to deal with climate change which will focus the states/regions more than India as a whole. 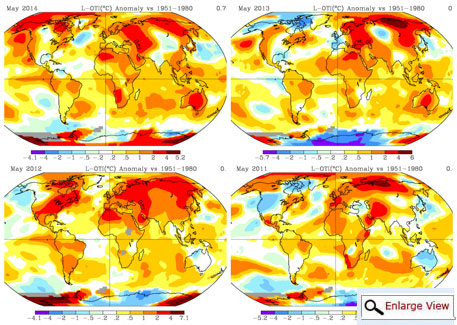 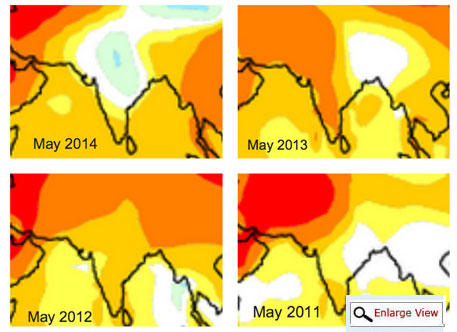