But there isn't much for them in urban or rural areas

Daniels' paper sparked media interest in the house sparrow. Several newspapers rang alarm bells over the decline of the bird in urban areas. The decline, I believe, is not just an urban phenomenon. House sparrows are on the fall in rural areas as well. And the problems are similar. There aren't enough nesting sites or food sources for the birds.

Let me cite the example from the Western Ghat region.Earlier houses in villages usually had an open verandah. The roofs held up by wooden or bamboo poles had hatches. Photographs lined walls on the edges of the verandah. The pictorial pantheon of ancestors, gods and freedom fighters was ideal nesting place for the house sparrows. The birds built their nests behind the photoframes and in the crevices of beams or hatches.

Predators such as cats and crows were common. But the cats could not disturb sparrow nests behind photo frames or in the thatch, and the scared crow did not come inside the verandah--a crow entering the house was considered inauspicious. Rock pigeons too never cross into the open verandah for nesting.

Village architecture has undergone change in the last three decades or so. The roof hatches are gone. The concrete houses of today have little space for the sparrow. There are no open verandahs and large photographs have gone out of fashion. Paddy and vegetable fields have been replaced with coffee, areca, mulberry and acacia plantations these are not the feeding grounds of the house sparrow. I am sure even in rural areas our house sparrows cannot build nests in gardens or nest boxes because cats and crows are sure to lurk there. 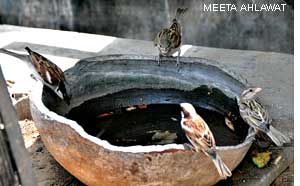 Apart from nesting and finding food, the house sparrow has another requirement dust-bathing. The birds create small saucer shaped bath pits. Bathing is a communal affair several sparrows congregate in these pits. Dust bath keeps the feathers clean and the skin free from parasites.

Where is the place for such communal baths today?

Mere investigations like counting sparrow populations would not do much for conservation. Suitable nesting sites and easy access to food is critical. Perhaps we should not do away with the roof hatches. Supermarkets where grains and vegetables are sold within a confined area are detrimental to the house sparrow.

But modern urban settings are ipso facto not detrimental to the house sparrow. I have noticed house sparrow nests in Bengaluru's busy K R market area. The birds had built nests in roof hatches and were feeding in the open vegetable and grain market. I have also seen house sparrows in cities in the UK, South Korea and Malaysia.

M G Venkatesha is at the zoology department, Bangalore University. He can be contacted at venkatmelally@gmail.com